If you're in the mortgage process currently or if you will be soon, there is a tremendously important development to be aware of.  The net effect is that rates are about to go up and, in some cases, they already have.

The culprit is the new "adverse market fee" announced for all refinances guaranteed by Fannie Mae or Freddie Mac on or after December 1st.  To hit that date with some lenders, your loan would need to close by mid-to-late October!  Given the high demand for mortgages, new loans will take at least that long in many cases.

The fee will result in rates moving higher by 0.125-0.25% (or in additional closing costs equal to 0.5% of the loan amount).  While that might not sound significant, this is the biggest change of its kind, ever.  We already had a sneak preview of the fallout when the fee was implemented WITHOUT advance notice in early August.  Rates reacted swiftly (arguably a bit more swiftly than they're about to, but it's proof of concept nonetheless) before recovering after the fee was delayed. 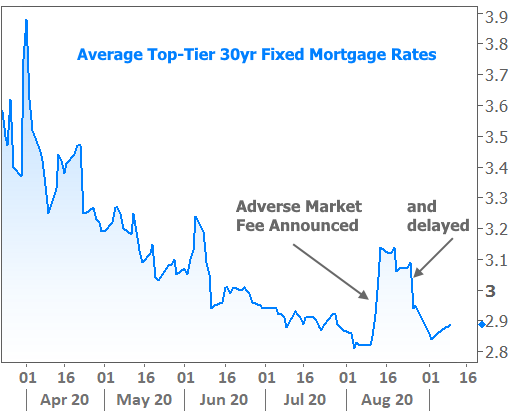 More important than the size of the rate increase is the certainty.  We essentially never get this kind of advanced notice about ANY guaranteed rate changes, let alone reasonably big changes.  This is why we were able to discuss an uncommonly strong case for locking last week.

So what should you do if you need a mortgage or are already in the process?

First off, it may already be too late.  More than a few lenders have already reinstated the fee.  Others have announced cut-off dates for certain lock periods.  For example, if you want to lock your rate for 45 days, one lender has a cut-off date of September 27th, but if you need a 60 day lock, it's September 12th.  Another lender is simply reinstating the fee across the board (for all lock time frames) on Monday the 14th.

As such, the best bet is to find out your lender's policy and proceed accordingly.  Time is of the essence.  As lenders accept more applications and locks, some will be forced to reinstate the fee earlier than anticipated due to the implications for longer turn times.  In fact, in general, it's good to remember that the mortgage industry is slammed right now.  The turn times you may have experienced in the past have no bearing on the present.  The process is twice as long as it used to be in many cases.

How about purchase loans?  After all, the fee specifically applies to refinances, so purchase loans should be safe, right?  This is mostly true, but not unequivocally.  While the fee won't show up as a separate line item on purchases, some lenders may simply be more conservative when setting their base rates.  Also, consider higher demand for refinances as borrowers rush to lock.  This can increase turn times for purchase borrowers, and longer turn times mean slightly higher rates, all other things being equal.  Bottom line, the sense of urgency should still be there for purchase mortgages.

Is there any way this won't be at least as bad as expected?  In other words, is there a chance this won't result in rates moving at least 0.125% higher?  When all is said and done, no.  The only way that could even appear to be the case would be if lenders were already nudging rates relatively higher in the past week or two.  Indeed, there isn't another great way to explain the level of upward drift in rates seen at some lenders recently.

Upward drift?  Yes, you may have seen news articles discussing "all-time low" mortgage rates this week, but that's definitely not the case.  The source of confusion, as usual, is Freddie Mac's weekly rate survey which moved too slowly to capture the actual all-time lows in early August.  The survey also neglects to count rate movement on Thursdays and Fridays which often results in discrepancies between news headlines and reality.

While the adverse market fee is the biggest concern for the mortgage market, lenders still have to pay attention to volatility in the broader bond market.  Thankfully, there wasn't much volatility this week.  Bonds spent most of their time following the drama in the stock market. 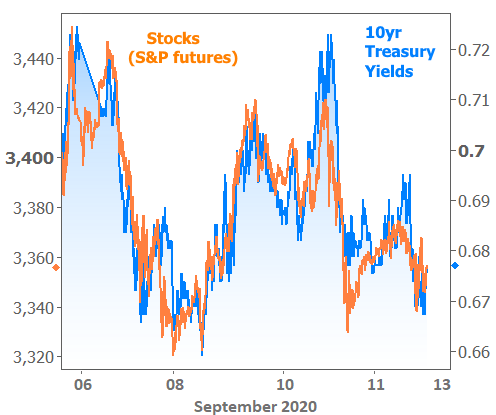 The chart above is a fairly isolate example.  In the bigger picture, stocks are still soaring, and bonds/rates are still in a historically low, narrow range. 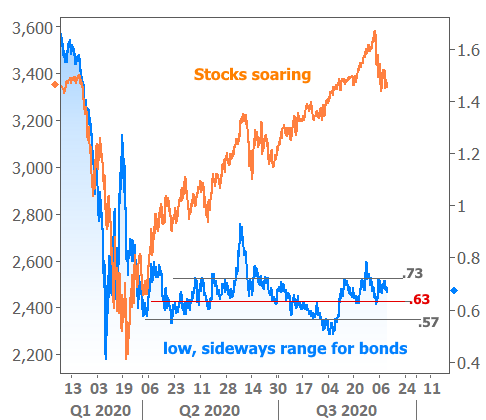 Looking ahead to next week, the biggest potential market mover will be the Federal Reserve's policy announcement.  Gone are the days of wondering whether or not the Fed will hike or cut rates.  Their policy rate is at 0-0.25% and not moving any time soon.  Rather, the Fed will communicate its policy by changing verbiage in the statement, updating its forecasts, and possibly even by tweaking the way it buys bonds.  Ultimately, nothing they do next week should be bad for rates in the long term (quite the opposite, actually), but there is always the risk of a volatile, counter-intuitive reaction on Fed day.

END_OF_DOCUMENT_TOKEN_TO_BE_REPLACED

With 25+ years of expertise in mortgage banking, you can be confident in my knowledge and abilities. My goal is to provide a seamless loan transaction, while meeting your needs with personal and attentive customer service.