On Friday, the National Association of Realtors (NAR) reported July's existing home sales came in at an annual pace of 5.86 million homes.  This crushed forecasts calling for 5.38 million, and demolished last month's reading of 4.70 million.  To top it all off, we haven't seen a higher number since 2007!  Great news, right? 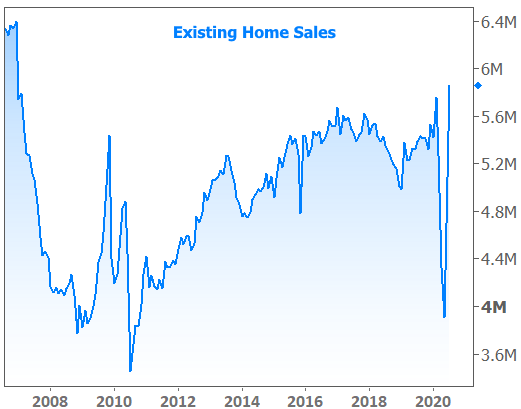 Actually, yes, this is great news.  The home sales market is doing every bit as well as anyone could hope for given the circumstances.  But visual takeaway on the chart is misleading.

Our eyes might see the blue line at the highest levels since 2007 and conclude the housing market is as strong as it's been since then.  In a way, it is.  July's home sales were indeed higher than any other July in the past 13 years.  But it remains to be seen if more homes will be sold this year vs last, even though the chart refers to the "annualized pace" of sales.

In NAR's words, "the annual rate for a particular month represents what the total number of sales for a year would be if the relative pace for that month were maintained for 12 consecutive months."

From there, we have to ask ourselves why July was so stellar.  There's no question homebuying demand is strong and that it might be even stronger if there were more homes on the market.  But there's also no question that a vast amount of demand that would otherwise have been seen in the previous months was pulled forward into July.

Still, the fact that we're in a position to have such a discussion speaks volumes, given the obvious headwinds.  It also helps us understand why construction-related housing data is doing so well.  With so few existing homes coming to market, new homes have to rise to meet demand.  Builders are as busy as they can possibly be, and it shows in this week's confidence data from the National Association of Homebuilders (NAHB). 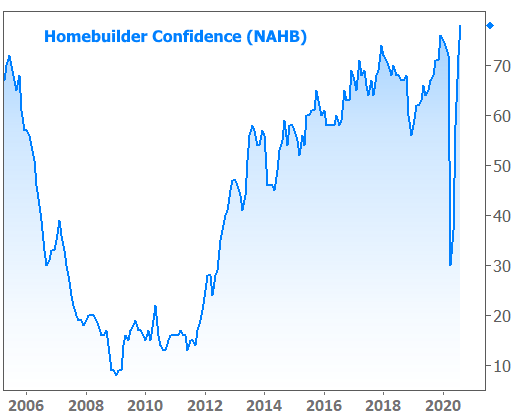 In separate data from the Census Bureau out this week, construction metrics painted a similar picture. 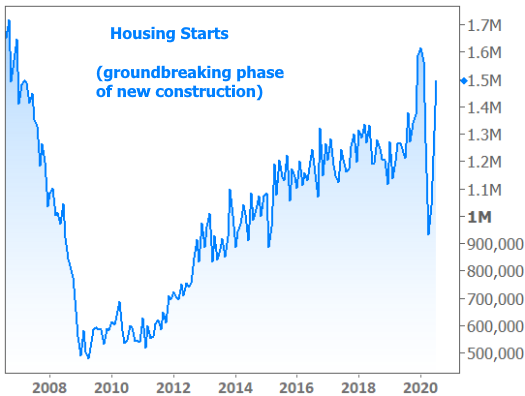 The Housing Starts data offers an important reminder.  Notice the strong numbers at the end of 2019.  In fact all 3 of the charts above were at the best levels in more than a decade in late 2019.  Why?

Simply put, 2018 sucked.  Rates were high.  Stocks stumbled.  And there were grumblings about the post-tax-cut economic expansion fizzling out.  As 2019 progressed, we were reminded just how powerful a massive drop in interest rates can be--both for stocks and homebuying demand (and refinance demand, for that matter). 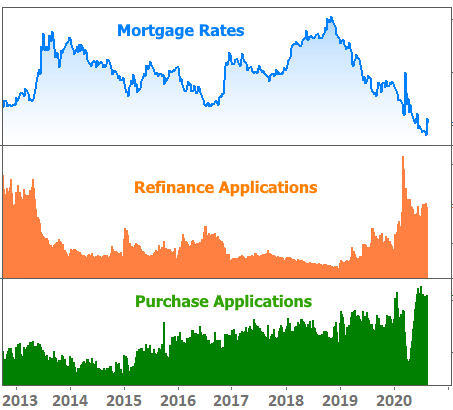 Given the power of low rates and the extraordinary length of time we've spent pushing into record low territory, everyone would like to know how much longer this will last and if we'll see even lower rates.  That's something we'll have to assess one week at a time.  No one really knows when rates will bottom out without the benefit of hindsight.

What we do know is that this week's market movement did more to reinforce the low-rate narrative than to threaten it (unlike last week, which saw rates move higher at the fastest pace since June). 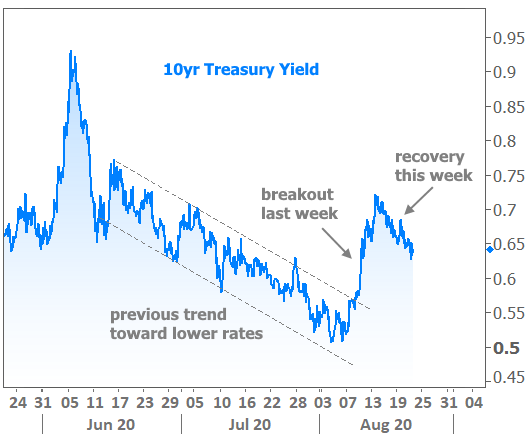 The last point of order would be that US Treasury Yields are not a perfect indicator for mortgage rates, even though they're perennially used for that purpose.  Most recently, the surprise announcement of a new fee on refinance transactions caused a knee-jerk reaction in the mortgage market.  It ended up affecting both purchases and refis, and by much more than the amount implied by the fee.

Had the housing agencies not implemented it so abruptly, things would be very different, but the damage is done.  This is the reason that mortgage rates were noticeably higher at the beginning of the week even though the bond market said they should be lower.  From here on out, we expect them to be better-connected, but still prone to inconsistencies for the next few weeks.