Last week, we discussed why rates keep breaking to new lows in 2017. This week we'll take a closer look at why they abruptly spiked to the highest levels of the month, and examine the potential market movers on the horizon.

First, let's recall the factors that did the most to push rates lower, namely geopolitical risks surrounding North Korea and the approach of Hurricane Irma.  Events like these put downward pressure on rates by creating uncertainty which, in turn, leads investors to move money into safer havens like bonds.  Excess demand for bonds pushes bond prices higher and rates lower.

As far as we knew last week, Irma was the storm of the century and North Korea stood a good chance of testing another missile over the weekend.  Reality ended up being slightly less dire than Friday's fears suggested.  There was no substantive news out of North Korea, and Irma--while still tremendously destructive--ended up doing less damage than predicted.

In other words, markets were braced for impacts that never fully materialized.  This provided a cue for traders to lower their defenses first thing Monday morning.  That meant unwinding the bond-buying that had taken place in the previous week (i.e. selling bonds, thus pushing rates higher).

Bond-selling was compounded by the surrounding environment.  This week saw heavy "supply" (new bonds being brought to market), both by the US government (Treasury auctions) and via the corporate bond market.  Even though corporate bonds don't directly impact mortgage rates, when supply spikes, there tends to be slight upward pressure on rates in general as the corporate bonds compete for investor attention.

Additionally, last week's movement left rates in what market technicians refer to as an "overbought" condition.  In simpler terms, there had been too much momentum in one direction and some investors had been forced to buy bonds when they otherwise would have preferred to avoid it.  When markets finally found a reason for bonds to bounce, those investors were keen to bet on rates moving back up (by selling bonds).  It was a classic market correction, albeit on a small scale. 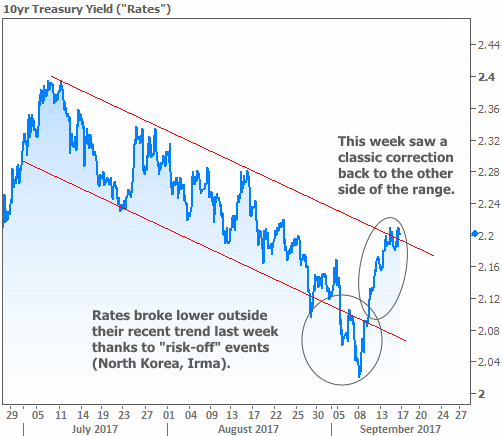 The bulk of the correction took place during the first 3 days of the week.  Rates found a supportive ceiling around 2.22% in terms of 10yr yields, but weren't interested in moving much lower for a few reasons.  The most obvious reason would be that last week's gains were based on temporary factors.

Inflation data was slightly stronger on Thursday and Friday.  Bonds/rates are very interested in inflation at the moment because it's the last thing holding back the Fed from more rate hikes.  Stable-to-stronger inflation doesn't help rates, all things being equal.

Rate hikes among other major central banks also puts pressure on rates in the US--especially if the cues are coming from Europe.  This week it was the Bank of England on Thursday saying it was getting closer to a rate hike.  British yields spiked rapidly.  While this isn't a primary source of inspiration for US rates, like the inflation data, it didn't help. 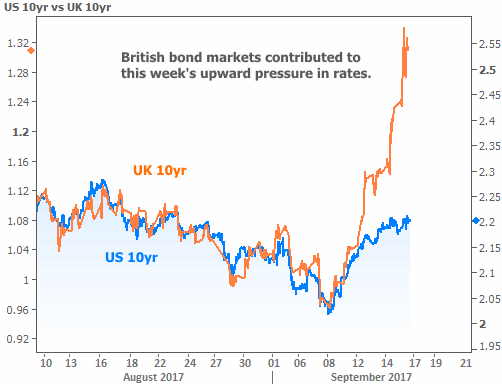 How about stocks?  There's always a temptation to blame the stock market when rates are moving higher.  At first glance, there's a good case for that this week considering stocks hit new highs.  But the correlation between rates and stocks has been too sporadic to give all the credit to this "asset allocation" trade (i.e. selling bonds and buying stocks).  After all, rates were falling the last few times stocks moved up to all-time highs. 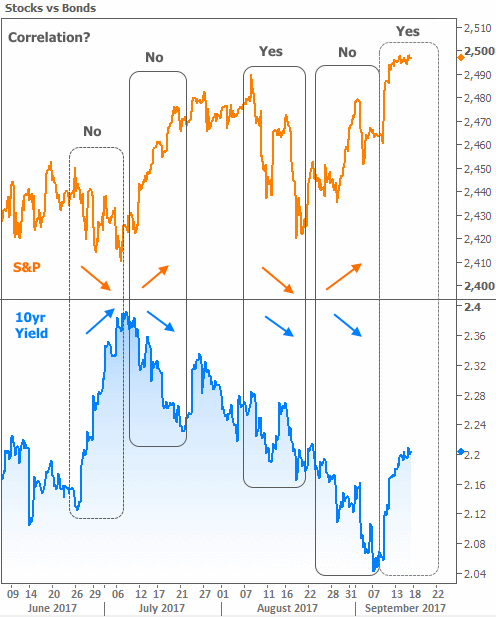 Risky events, inflation data, and tighter monetary policy abroad all exert some influence on rates because they all inform the likelihood of the next Fed rate hike.  The Fed isn't the only game in town when it comes to long-term rate momentum, but it is the most important.

Waning geopolitical risks, stabilizing inflation data, and less severe hurricane damage make it that much more possible for the Fed to hike rates in December.  The following chart shows December's rate hike odds relative to movement in 10yr Treasury yields (the best benchmark for momentum in longer-term rates like mortgages).  It's here we see the most correlation over the past few months and a clear bounce at the beginning of this week. 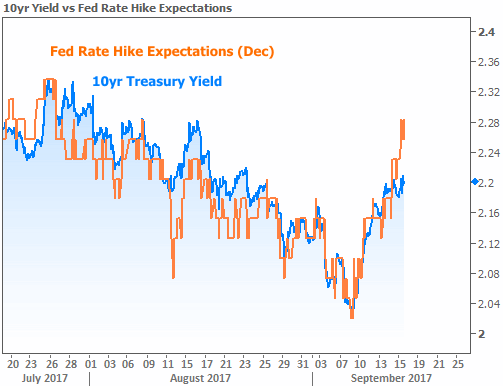 Next week brings several of the big housing-related economic reports as well as a landmark Fed policy statement.  Markets widely expect the Fed to announce the beginning of its balance sheet tapering program.  That's already mostly reflected in current rate levels, but the confirmation could still be worth some volatility--especially if it's accompanied by any  change in the rate hike outlook.