One of the week's most interesting headlines came courtesy of the 91-year-old ex-Fed Chair Alan Greenspan who warned of a bubble bursting in the bond market. Even if such a thing materializes as a legitimate threat in the future, we're nowhere close at the moment. This week's market movement concurs!

Last week's newsletter discussed the market volatility that can sometimes occur as a result of more esoteric motivations (revisit it here, if you like).  These can include things like compulsory trades based on changes in an index, or even simply in rates and prices themselves (i.e. traders forced to buy/sell for reasons unrelated to economic data or news).

Right at the time traders were making these "new month" trades (Tuesday morning), GM released abysmal sales data.  It was bad enough that traders treated it like a form of weak economic data (which can create excess demand for bonds and thus, lower rates).  This may have added to the bond buying that was already underway.

While we can't know exactly how much of the move was driven by the esoteric factors compared to the GM sales data, we can see it was certainly the defining moment of the week for rates.  From that point on, traders attempted to get in position for what they thought would be a weaker jobs report on Friday--the most important economic data on the calendar.  When the report topped expectations, rates quickly returned to the same levels seen just after Tuesday morning's big move. 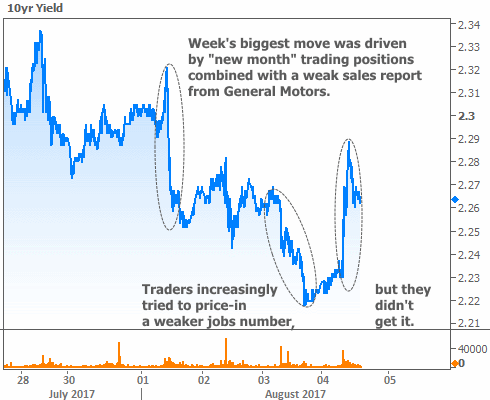 Why does it matter that we returned to Tuesday morning's levels?  Although it's not of earth-shattering importance, it is a testament to the flat ranges seen so far in 2017.  For a year that was supposed to see a disturbing trend toward higher rates, things have actually been far calmer than average.  Since the November presidential election, we've spent about half our time inside ranges no wider than 0.30% in terms of 10yr yields.  This week's micro-volatility leaves us right in the middle of the current 0.30% range. 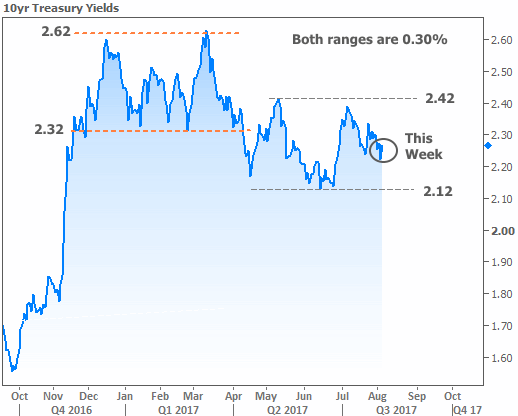 In other words, even though people like Greenspan can hypothesize about scary bond bubbles, reality has been far more boring.  Markets aren't even making menacing gestures toward the boundaries of these narrow ranges, let alone surging high enough to even begin discussing the sort of big-picture reversals emblematic of a bursting bond market bubble.

Some basic trend lines drawn over the past few years suggest we'd need to see yields moving over 3.0% before the first alarm bells would be going off.   In looking at the same chart, it's also striking to see just how unique the early 80's look in the biggest picture. 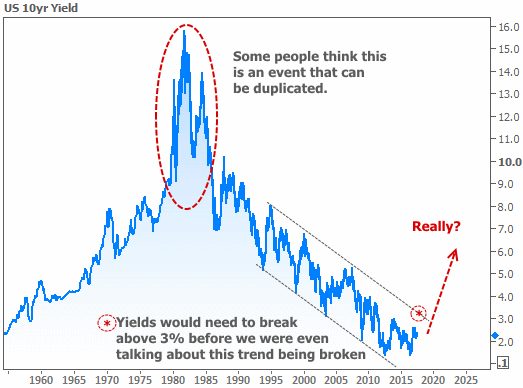 It's good to remember that most anyone with a strong opinion on long-term bond trends will either have lived through that aberrant era or have learned from someone who did.  This affects the general paradigm about where rates might go in the future.

"Because they were that high in the past" isn't a great argument for their potential range in the future.  That's not to say rates simply can't or won't move higher.  Indeed they can, and indeed that can be painful for prospective mortgage clients hoping for the best rate.

Rather, the point is that we're not on the brink of a catastrophic bubble.  We're not even outside the prevailing long term trend!  Once we cross that boundary (dotted parallel lines in the chart above), it would make more sense to start wondering about where rates might go from there.

In housing-related news this week, The National Association of Realtors reported the first increase in 4 months for Pending Home Sales.  The Mortgage Bankers Association brought mixed offerings, citing a slight improvement in credit availability, but an across-the-board decline in mortgage applications.

Perhaps the most interesting development of the week for the mortgage world had to do with Fannie and Freddie's quarterly financial results.  Typically a fairly dry affair, this time around both GSEs alluded to the possibility that the FHFA (the agency that oversees them) would take some action to prevent their "capital buffers" from being drawn down to $0 by the end of the year (which is currently the plan).  This could foreshadow something of a battle between congress and the FHFA over who gets to hold on to Fannie and Freddie's profits--or a portion of them anyway.