Next week's Fed announcement is a hot topic. Market metrics and surveys of economists suggest ever-increasing odds of a rate hike. As such, it may come as a surprise to learn that a rate hike is pointless in terms of its impact on financial markets, but there's a catch.

It's pointless because at no time in recent memory have financial markets been so certain that the Fed will make a particular move.  There's actually no way a Fed rate hike could be any more likely than market metrics suggest.

Among those metrics, one of the most reliable is the "overnight-indexed swap" market (or "OIS").  Simply put, it reflects the rate banks are charging each other for short-term borrowing.  Given that the Fed Funds Rate is the final word in short-term borrowing, OIS closely tracks the expected Fed Funds Rate in the month leading up to a potential rate hike.  This is easy to see in the following chart. 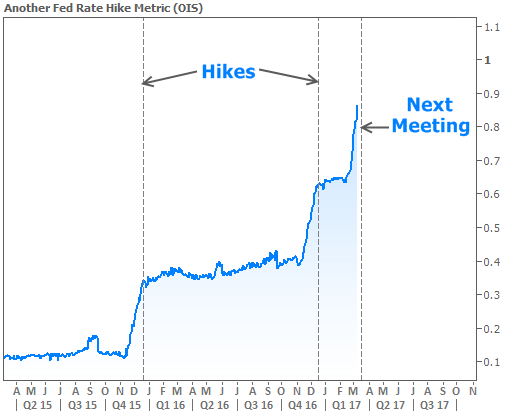 The trajectory of the blue line over the past month means billions of dollars are already actively prepared for next week's hike... done deal... pointless to wonder anymore.  It would take something truly astonishing (in a bad way) for that to change.

But while the rate hike itself is pointless, the Fed meeting will still be quite relevant.  In fact, another piece of info coming out on Wednesday afternoon will likely be the most important data of the week.

Along with the policy statement (where the Fed officially announces the hike), the Fed releases economic projections 4 times per year.  Sometimes referred to as "the dots" (due to the dot plot used to convey some of the data), these projections are critical in shaping market expectations about Fed policy beyond Fed day itself.

It was the dots that rocked bond markets (and thus, rates) in mid December 2016 (after all, you can see in the chart above that financial markets were already pricing-in the hike).  And it's the dots that will likely dictate the direction and pace of the next move in rates.

As for probabilities, it only makes sense to be prepared for longer-term rates (like mortgages) to move higher after the Fed announcement.  But keep in mind that financial markets are always doing their best to adjust today's trading levels to reflect their best understanding of how the future will unfold.

That means today's interest rates are not only taking the Fed hike into consideration but also likely reflect expectations about changes in the Fed's projections.  There's some possibility the Fed's rate hike outlook will accelerate less than markets expect.  In that case, rates wouldn't necessarily be marching to their doom (this isn't a prediction... just a reminder that there's room for rates to move either way next week).

We've certainly seen plenty of upward movement recently, with average 30yr fixed mortgage rates hitting 2017 highs this week.  The rate spike is actually a bit worse than most news stories suggest because most news stories rely on Freddie Mac's weekly survey.  Although the survey is accurate in the long run, it can lag day-to-day movement--especially in the second half of any given week.  Here's how this week's actual movement stacks up: 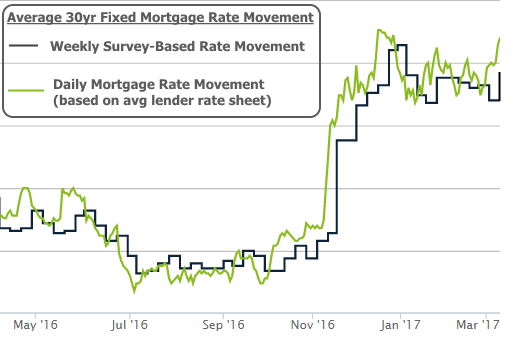 As the chart indicates, rates are close to long-term highs.  For the housing market, the timing is poor. Just this week, CoreLogic reported that its home price index expanded at a slower pace for the first time in 6 months.  Price gains are expected to contract to an annual pace of 4.8 percent by next January vs 6.9 percent recorded through January 2017.

Despite rising rates and the shift in prices, the average American remains upbeat about the housing market.  Fannie Mae's National Housing Survey showed a surge in home-buying sentiment to its best levels since record-keeping began in 2011.

In economic news this week, the Labor Department reported strong job growth, with nonfarm payrolls rising 235k.  Analysts were officially expecting a 190k increase, but markets were prepared for something higher based on an earlier report from ADP.  This meant rates made their biggest move higher on Wednesday and were then able to take Friday's numbers from the Labor Department in stride.