Following last week's announcement from the European Central Bank, the tone in rates markets has shifted. This time around, it's less about the fear of a potential Fed hike and more about the risk that central banks won't be able to keep longer term rates low forever.

Right now, the driving force behind ultra-low long-term rates is central bank bond buying.  Even in the US, despite the absence of an official quantitative easing (QE) program, the Fed continues reinvesting the money it receives each month from the mortgages it bought during the the 3 previous QE programs.

Europe and Japan's central banks are still expanding their balance sheets.  That means they're pumping new money into the financial system.  Currently, the primary vehicle for this money creation is the purchase of bonds (similar to the Fed's QE programs).  This is great for mortgage rates because higher demand for bonds results in lower rates, and central banks are a HUGE source of demand!

But as of late last week, investors began to worry that Europe and Japan might be reaching an inflection point where their conversations shift from "should we buy even more bonds?" to "maybe we can get away with buying fewer bonds."

The catalysts were twofold, at least.  First of all, European Central Bank President Mario Draghi avoided his typical level of reassurance regarding asset purchases and easy money.  In separate news, Japanese officials expressed concerns over the efficacy of their central bank's easy money policies.

Speculation is increasing that both banks may run out of bonds to buy, ushering a shift from "monetary accommodation" (easy money from central banks) to "fiscal stimulus" (government programs intended to help their respective economies).  The latter is bad for financial markets (including rates) in the short term, because it doesn't involve the creation of new money.

These bigger-picture considerations mean that this week's volatility in rates has much less to do with Fed rate hike fears (which had been a key consideration in recent weeks).  In fact, rate hike expectations have decreased, even as 10yr Treasury yields (the best proxy for big-picture momentum in longer-term rates like mortgages) have risen. 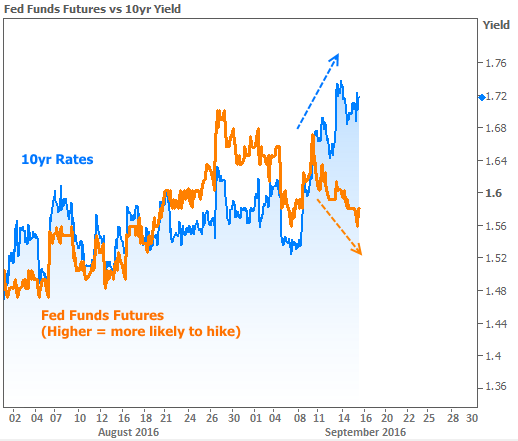 The move in rates is serious.  It fits a pattern that some market watchers refer to as a "triangle breakout."  The term comes from the lines that can be drawn along the highs and lows of any chart.  When those lines converge, prices or yields are consolidating--moving closer together.  Such consolidations are often followed by more substantial moves, be they higher or lower.

The thinking is that markets are either finally making a decision after a period of indecisiveness, or simply that they've finally spent enough time finding their footing from the last major move that they're ready for the next one.  Unfortunately for rates, the current triangle is being broken on the upper line. 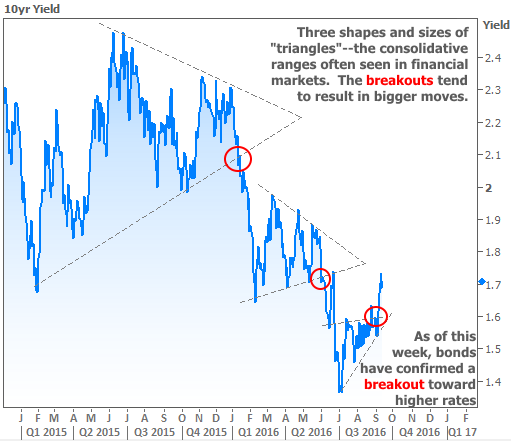 There are two great sources of perspective though.  First of all, consider the depth of the last "triangle breakout" earlier this year.  Rates didn't cover too much ground before changing course.  In other words, the fact that we're breaking toward higher rates doesn't mean rates have to go significantly higher.  It merely identifies the current trend.

The other source of perspective is pretty simple, and it has to do with where we are in the biggest of pictures: 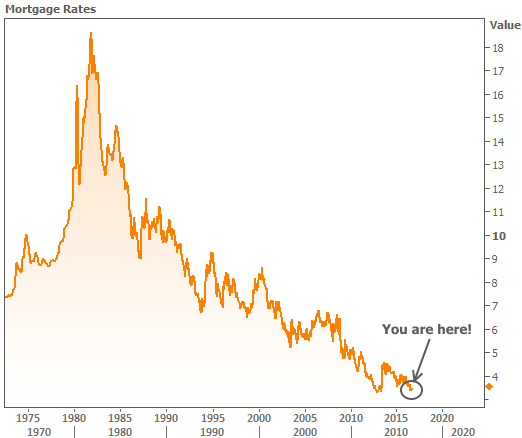 It was a light week for economic data until Thursday.  Multiple reports were released with the most significant--Retail Sales--coming in at -0.3 versus a median forecast of -0.1.  Odds for a Fed rate hike decreased further following the data, but that wasn't much consolation to mortgage rates, for the reasons discussed above.

In news off the beaten path, CoreLogic highlighted the the interesting phenomenon of lower-FICO borrowers increasingly moving away from urban areas.

Next week's focal point will be Wednesday's Federal Reserve Announcement.  Again, the Fed is not expected to hike rates (although it is technically a possibility), but markets will be very interested to see what Yellen has to say in the press conference following the announcement.  Also potentially significant are the updated economic projections from Fed members, released with the announcement at 2pm.