It's a tremendously important and volatile time for the market and especially for interest rates.  The biggest inflation surge in decades pushed rates to their highest levels in 14 years by mid June.  Since then, there are signs that things have leveled off, but no compelling evidence for a reversal.

The Federal Reserve (or just "the Fed" for short) is at the center of this high stakes game.  The Fed is closely watching inflation and job growth to determine how quickly it needs to adjust its main policy tool the Fed Funds Rate (FFR).

The FFR is very different from mortgage rates or 10yr Treasury yields (which correlate well with mortgage rates), but the expectations for future FFR changes are very important.  They set the tone for rate movement across the board. 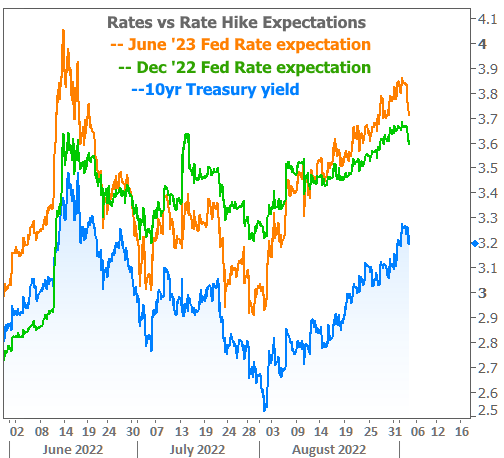 Stronger economic data coincides with higher rates in general, but it's doubly important right now while the Fed is considering whether it might be time to slow the pace of rate hikes from the recent pace of 0.75%.  Moreover, the Fed has specifically pointed out that the jobs market is "too hot," thus making labor market data even more important for market movement.

It may seem odd to consider that unemployment could be too low, but the Fed has reminded the market on multiple recent occasions that its primary focus is fighting inflation.  One of the only ways the Fed can do that is to "hurt" the economy with higher rates thereby driving demand lower.  In that "supply/demand 101" scenario, prices theoretically need to fall to meet demand (or at least stop moving higher so quickly).

Some indicators already suggest a shift has taken place in inflation.  For example, this week brought the release of a key manufacturing sector index from the Institute for Supply Management (ISM).  While the overall index didn't budge, the sub-index that tracks inflation fell sharply. 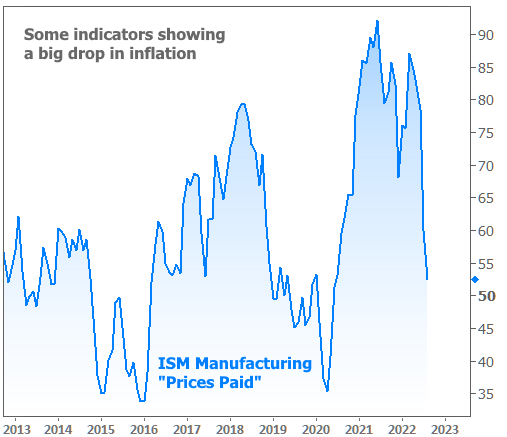 While this was great news in and of itself, other inflation metrics remain far more important.  Moreover, investors are taking the recent inflation victories with a grain of salt due to the big drop in oil prices over the last two months.  The following inflation indices attempt to minimize the impact of volatile food and energy prices.  These are the numbers the Fed wants to see back down around 2% before declaring victory. 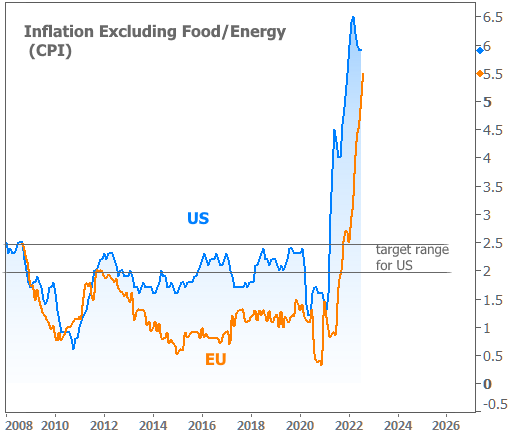 The chart above highlights another challenge for the Fed.  In a globally interconnected economy, overseas inflation has to be considered as well, and Europe has not yet turned the same corner seen in the US.  On Tuesday, European inflation data coincided with a strong Consumer Confidence report in the US to push rate hike expectations to their highest levels in more than a month. 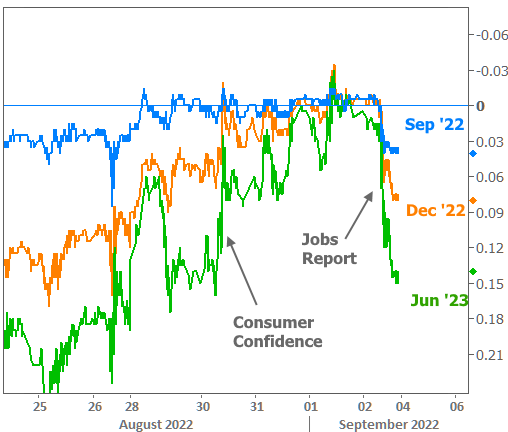 As the chart above shows, rate expectations were able to recover after Friday's big jobs report.  Thankfully for rates, the data showed a deceleration in the pace of job growth seen last month.  This is far from an instant victory for rates though.  Job creation remains very strong historically with very few months from the past 20 years rising above the 300k mark for any given month (this week's report was 315k). 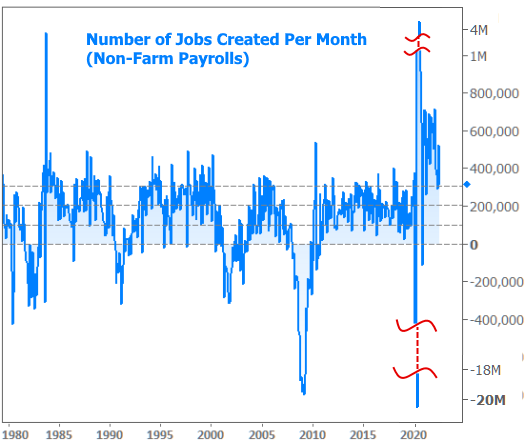 Side note: if the scaling jump in the y axis makes it hard to conceptualize 20 million job losses in 2020 or 4 million new jobs shortly thereafter, here's how the same chart would look if we didn't include the jumps: 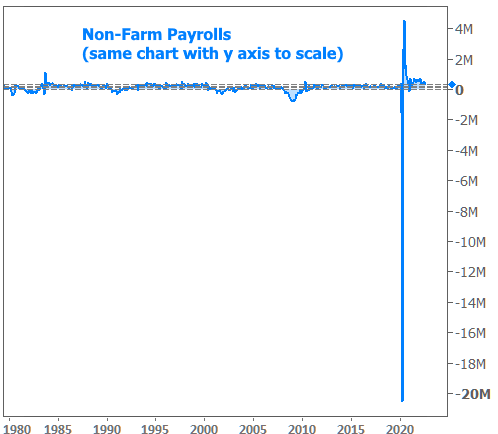 Side note on that side note: the depths of destruction post-covid help to explain why month-over-month job creation has been able to run hotter than normal over the past 2 years. Looked at another way, we're just barely back to the overall level of employment seen in early 2020. 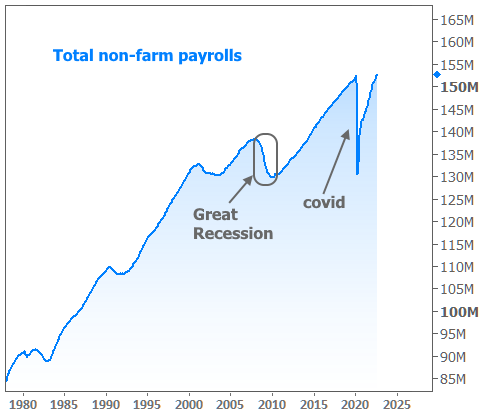 The still-strong job growth was offset to some extent by a decline in the pace of wage growth which only rose 0.3% in August compared to 0.5% in July.  The unemployment rate also ticked up 0.2% to 3.7% even though that rise is more than accounted for by new workers entering the workforce.  Caveats aside, 3.7% is still exceptionally low historically--too low for the Fed to even begin to imagine their policies have "hurt" the economy enough to promote their inflation goals. 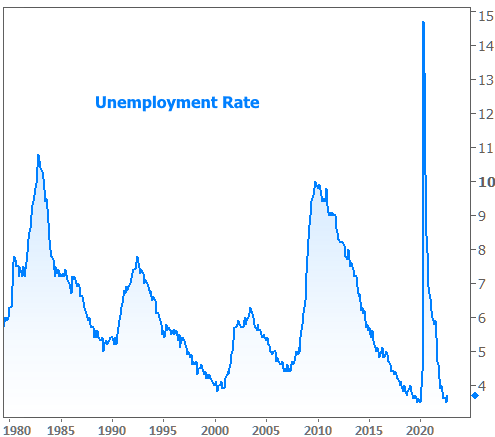 Rates managed to recover after the jobs data--a fact that suggests the bond market was prepared for better news.  The drop in rates was also made possible by the fact that rates had surged higher at the fastest pace in decades in the month of August.  In other words, Friday may have been better, but we're still much higher than last week (indeed, the weekly indices are still playing catch-up to actual daily averages). 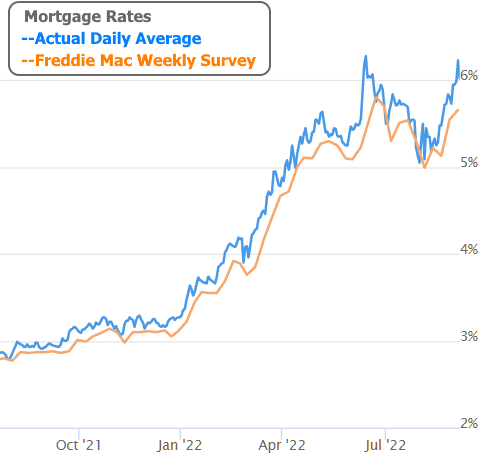 Perhaps just as troubling as the high rates themselves is the extent to which rates have been changing from day to day.  Ultimately this is part and parcel of the Fed's current dilemma.  The Fed would like to engineer a soft landing for the economy.  After all, they're using economic pain to fight inflation, so they'd prefer to do that with as little pain as possible.  Threading that needle means accurately identifying the economic tipping point where inflation will respond.

This delicate dance has the market on the edge of its seat.  Economic developments at home and abroad have had far more power to move markets than normal.  And because the Fed deals in rates, interest rates have consequently seen unprecedented volatility.  To be fair, outright volatility was a bit sharper in 2020, but that episode lasted 2 months at best.  The current episode of heightened volatility is going on 6 months now! 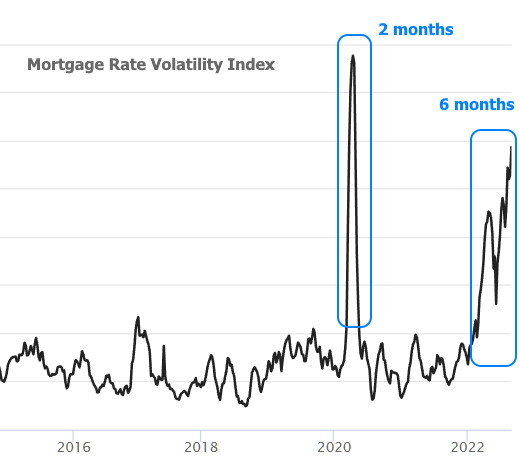 The higher the black line in the chart above, the bigger the average difference between one day's mortgage rates and the next.  It's important to understand that this is the reality of the rate market right now!  We've never seen day-over-day changes of this size with such reliable frequency.

As for how all this plays out, the coming weeks and months are the most critical.  The big-ticket inflation indices like the Consumer Price Index (CPI) will be tremendously important.  The Fed will get to see one more installment of that in 2 weeks before announcing its next rate hike on September 21st.  And yes, we already know it will be a rate hike, but the size of the hike and the accompanying verbiage could go a long way toward reinforcing a rate ceiling or demolishing it.