After spending more than a month holding fairly steady near 8-month lows, rates are moving quickly higher this week. Not only are the underlying reasons somewhat opaque but there are multiple media outlets reporting the "lowest mortgage rates of the year." What's really going on here?

The discrepancy between actual mortgage rate movement and certain news stories is easy to explain (as seen in a past newsletter), so let's start there.  At issue is the fact that Freddie Mac's weekly rate survey is a longstanding industry benchmark for mortgage rates.  It's heavily relied-upon by analysts working in the secondary mortgage market as well as journalists who simply use it as their one source for a weekly mortgage rate update.

Because the report is released at 10am on Thursday morning, we tend to see a glut of news stories offering similar conclusions about mortgage rate movement.  This seemingly unified message only adds to the confusion.  After all, if all these big news organizations are telling us that rates are at the lowest levels of the year, it must be true, right?

Freddie's data is GREAT for long-term analysis of general mortgage rate trends but it does a GREAT DISSERVICE to prospective borrowers keeping an eye on day-to-day changes.

The reason is strikingly simple: rates can move every day, but Freddie's survey only covers the first 3 days of any given week.  Moreover, most of the responses tend to come in on Monday and Tuesday.

In other words, Freddie's survey is best described as "Monday/Tuesday rates vs last Monday/Tuesday's rates." This creates obvious problems if rates are making bigger moves in the second half of any given week--especially if they moved in the opposite direction during the first half of the week.

Here's how all of the above played out this time around.  Mortgage rates were indeed in line with the year's lowest levels on Monday (only June 14th was any better as far as individual days are concerned).  But the next 3 days all saw rates move convincingly higher.  Freddie's survey responses--being weighted toward the start of the week--simply didn't capture the magnitude of the rate spike (it will be reflected in next week's numbers unless we get a friendly bounce between now and then).

The bottom line is that rates are definitely not at 2017's lowest levels.  In fact, in terms of day-over-day changes in actual lender rate sheets (remember, humans respond to surveys, and they might not all be cross-checking actual rate sheets before firing off their responses to Freddie), rates are as high as they've been since May 16th.

A major caveat is that the recent range of mortgage rates has been exceptionally narrow by historical standards.  It's also been holding fairly close to the lowest levels in 8 months.  Still, the amount of movement over the past few days adds up to hundreds, even thousands of dollars for some borrowers' loan quotes.  That could be quite the surprise if they've just heard about the "lowest rates of the year" on the evening news. 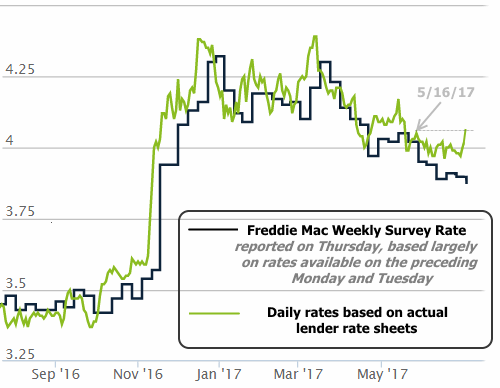 Now that we know WHAT mortgage rates have actually been doing, let's talk about WHY.  If you remember the so-called "taper tantrum" in 2013 (the market reaction to the Fed signalling its intent to buy fewer bonds), then you're halfway there.

This time around, the focus is on the European Central Bank (ECB), whose bond buying puts it in the same league as the Fed in terms of impact on financial markets.  Whereas the Fed has long since stopped expanding its balance sheet (they may even begin shrinking it later this year), the ECB continues adding more bonds to its balance sheet every month.

Given the huge impact of the taper tantrum in the US, investors are on guard for any indication of tapering in the EU.  ECB President Mario Draghi gave just such an indication in a series of comments earlier this week.  He spoke of deflation being replaced by reflation, above-trend growth, and the need to gradually adjust bond-buying parameters.

ECB Officials would subsequently try to explain that Draghi was aiming for comments that balanced positive developments with the ongoing need for substantial bond buying.  But the takeaway for market participants was that the ECB is moving closer and closer to tapering.

Why should rates in the US care about what's going on with the European Central Bank?  To make a long story short, global bond markets (which drive interest rates) are interconnected and interdependent to a certain degree.  US rates might not respond to European rates in lock-step, but they definitely respond.  As such, it's no surprise to see European benchmark rates surging and US rates following with a more measured version of the same move. 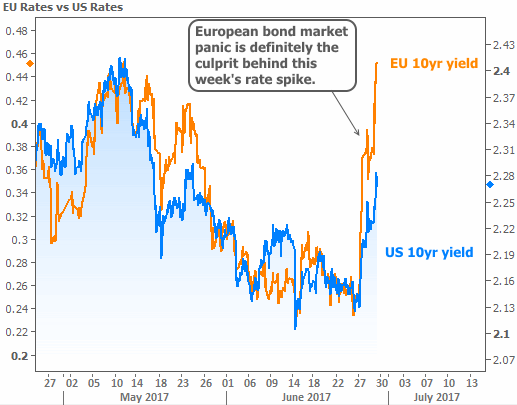 Is this the end of low rates forever?  Not by a long-shot.  First of all, we're only a few days into a move that took several months to play out in the US.  We can't yet know if European rates are embarking on a similar journey.

Even if that happens, it's good to keep in mind that rates generally move higher when central banks are actually in a bond-buying cycle.  True, that sounds terribly counterintuitive (after all, if the Fed/ECB are buying bonds, rates should be going down), but the following chart with QE time-frames in the US doesn't lie. 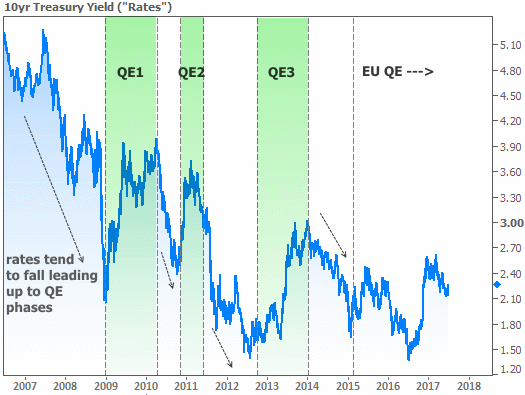 Don't read too much into this chart because it could be competently argued several ways.  The point of posting it is to offer perspective.  What might seem like a surefire reason for rates to move higher could merely be the catalyst for a temporary correction in the bigger picture.  After all, most economists and analysts thought low rates were a thing of the past by the end of 2010 and 2013.  The subsequent years were the best 2 years of the recovery.

There were several interesting developments in housing this week.  2 weeks after comments on a potential "housing emergency" due to tight inventory, The National Association of Realtors (NAR) now says the perception of a seller's market could provide motivation for owners to list their homes, thus relieving some of the inventory pressure.

As for the month of May, there was no such relief in sight.  The NAR blamed lopsided supply and demand for the lowest Pending Home Sales levels since January.  Despite the justification, it's worth noting that this index hasn't been able to get back above its current range since the meltdown. 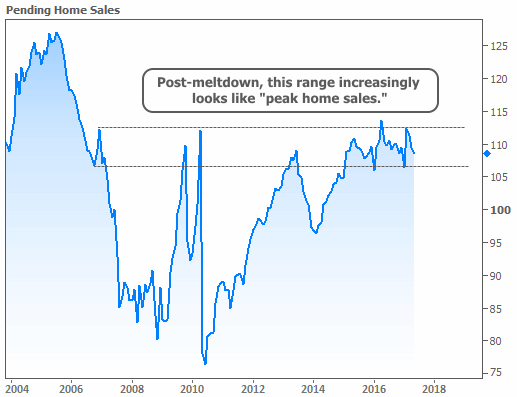 Both Black Knight and Case-Shiller released their monthly home price indices.  Both set record highs at the national level, and both reports agree that the national numbers are being dragged higher by several outstanding regional markets.  Of the two, the Case-Shiller report did more to provide a counterpoint to the positivity, citing some signs of deceleration.