All eyes were on the big jobs report this week. Traders were anxious to see if it would be strong enough to accelerate the timeline for key policy changes that would greatly impact rates.

The bond market and indeed many homeowners remember 2013's taper tantrum all too well.  For those who need a refresher, the taper tantrum occurred after the Fed began tapering the bond purchases that had been holding interest rates down.  Rates shot up at one of the fastest paces in history.

With the Fed still buying $120 bln per month in Treasuries and mortgage-backed bonds since the start of the pandemic, traders know there will eventually be another reckoning.  Fed speakers have been clear in saying they'll provide ample warning this time around, but no one wants to be late to that party!  So traders are perpetually dissecting all incoming economic data for early warning signs.

Among that data, the big jobs report (officially, the "employment situation" from the Bureau of Labor Statistics) reigns supreme.  No other report is held in the same regard when it comes to its ability to guide policy and trading decisions.

As covid case counts drop and vaccinations increase, local economies are quickly moving back toward more normal levels of activity.  Traders have been expecting that activity to start showing up in the data. but the turnaround hasn't been as noticeable when it comes to the big jobs report.

Case in point, this week's second most important report, the monthly index on activity in the services sector published by the Institute For Supply Management (ISM) just hit an all-time high. The higher it is, the faster the economy is growing. 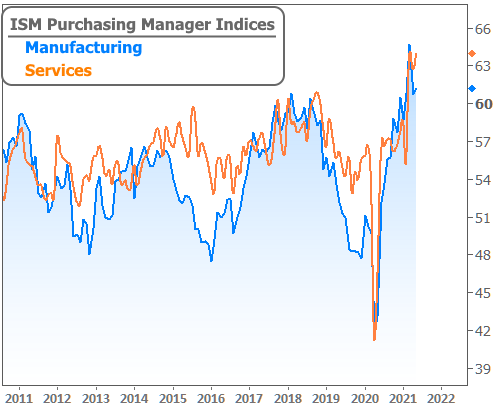 In addition, several of the week's other labor-related reports showed ongoing improvement.  Of particular note was the longstanding, but still fairly obscure "Job Cut Report" from staffing agency Challenger, Gray, and Christmas.  It hit its lowest level in 2 decades last month, and essentially maintained it in the most recent report. 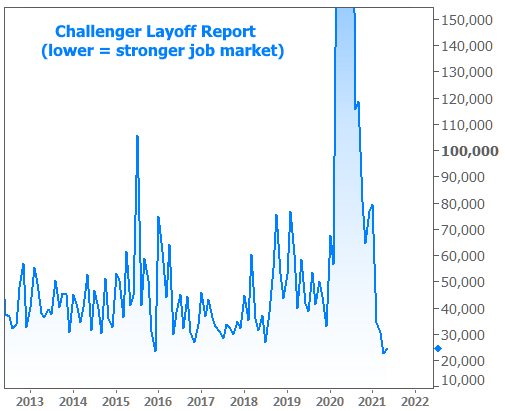 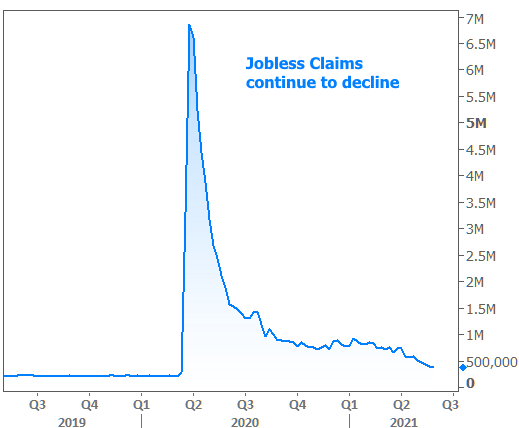 In fact, even when we consider the headline from the big jobs report (559k new jobs created last month versus only 278k in the previous month), it seems like everyone is on the same page and that we should increasingly worry about the Fed.  But the catch is that the market would have needed to see a number closer to 1 million in order to really freak out.  As it stands, 559k didn't even hit the median forecast of 650k.

When we look at a minute-by-minute breakdown of the reaction to the jobs report, we can see just how nervous both sides of the market were.  Stocks and bonds (aka "rates") improved almost instantly and rather significantly. 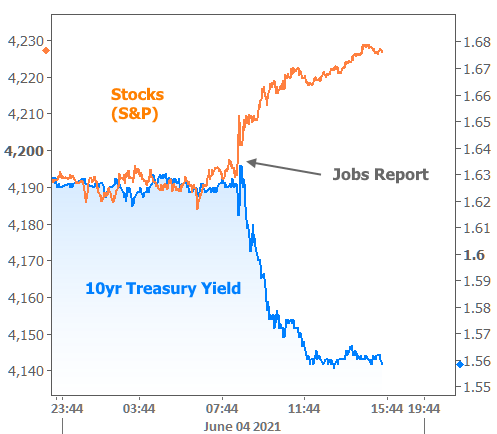 And when we zoom out a bit, we get the impression that this isn't the first time stocks and bonds have moved in this symmetrical pattern--improving together when expectations for Fed support improve and losing ground together when Fed support seems less certain. 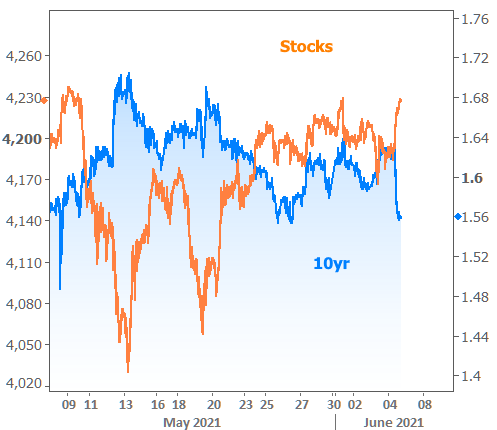 We're using stocks in the charts above purely to illustrate a point about how the overall financial market reacts to Fed accommodation prospects.  The bond market is what matters for rates, and the big picture is fairly clear: despite any short-term volatility, we remain in an "intermission" after rates moved higher at the beginning of the year. 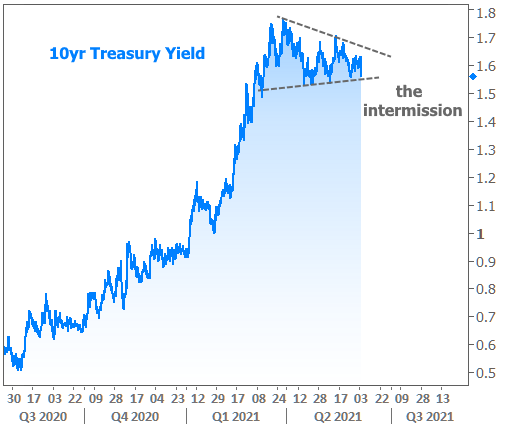 Side note: mortgage rates haven't cut the same path as Treasuries, but that was an exception to a generally well-behaved rule.  While we may still see small departures from that rule, the big disconnect from 2020 is now resolved.  Translation: it's once again OK for mortgage rate watchers to pay attention to Treasury yield trends. 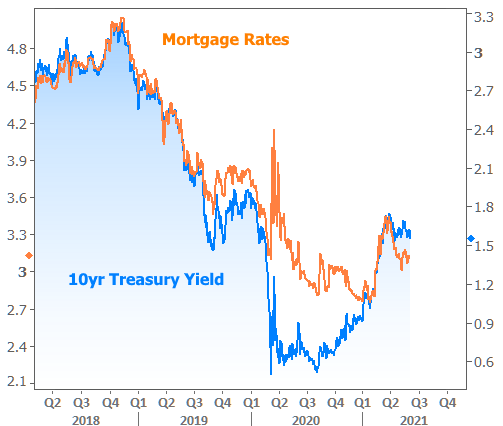 So what does this week's jobs report mean for rates?  It means we get to do the same song and dance next month, if not sooner!  The jobs report data was collected over 3 weeks ago and things are changing rapidly.  Each new update on the labor market runs the risk of making Fed taper talk a reality.  We can enjoy these short-term recoveries in rates, but barring a major economic stumble, the intermission is more likely to give way to another move higher.