It's no secret that the stock market has plummeted this week and only slightly less of a secret that the 10yr Treasury yield has dropped well into new all-time lows (on 4 straight days, in fact).  Given that mortgage rates are often discussed in the context of the 10yr yield, why in the world aren't they falling at the same pace?   More frustratingly, why would many mortgage lenders keep rates unchanged on Tuesday and Wednesday even as 10yr yields dropped like a rock?

First thing's first: mortgage rates may not be at all-time lows and they may not be keeping pace with Treasuries, but they're VERY close to all-time lows, and easily into the lowest levels since 2012.  It's actually a bad thing for the mortgage market when rates fall too quickly, and that's precisely why market forces act to prevent it.

To understand why this is, we'll need to get a bit technical, so I will break things down in a fairly basic way in order to account for as many levels of understanding as possible (even then, it can still take time to fully understand what's going on here).  This will make for a bit longer of a newsletter.  Sorry about that, but this is an important topic and there's not a lot of great information out there on it.  Away we go!

Actually, not really!  Many people think the 10yr Treasury yield is responsible for mortgage rates because, in many ways, it is! The 10yr is what's known as a benchmark.  That's like a yard stick against which many other forms of similar bonds are measured. It's also a key guidance-giver for the direction of all those similar bonds.  (Remember: a bond is a loan with a price and a yield.  Yield=rate.  So the bond market determines rates.)

What's so special about the 10yr? Why does it get to be a benchmark?

First off, all Treasury yields are benchmarks.  Reasons for that include the following:

All of the above means that Treasuries are the simplest expression of what it should cost to borrow/lend money in the US.  They are the plain ice cream BEFORE the vanilla is even added in!  Every other kind of bond/loan is something slightly more complex or slightly riskier than Treasuries, and most of them are judged and valued against the backdrop of Treasuries.

The 10yr Treasury actually gets its distinction due to some weird choices in the structure of the Treasury market.  The US borrows money for various lengths of time (referred to as maturity/duration in the bond world).  These maturities start out small and go all the way up to 30 years.

The 10yr is special because it's the longest maturity without being TOO long.  If you want to go any longer, you have to step up to the 30yr bond, and that's a very different, very specialized tool for a very long-term outlook. This makes the 10yr Treasury the ideal representative (aka "benchmark") for longer-term interest rates.

But if mortgages last 30 years, why isn't the 30yr Treasury bond even better?

Apart from 30yr Treasuries not being nearly as active as the 10yr, there's another key reason we don't use them as a benchmark for mortgage rates.  Mortgages may be ABLE to last for 30 years, but they rarely do.  In fact, they typically last for less than 10!  Think about that for moment...  We already have a very popular, very actively traded US Treasury benchmark at 10 years and the average mortgage doesn't last any longer than that.

If any other Treasury security were to be considered as a mortgage rate benchmark, it would be the 5yr.  Yes, there is a 7yr Treasury, but the 5yr is far more liquid/active and has been trading a lot longer.  Remember, we need those qualities for a good benchmark.  As such, it's no surprise that many participants in the secondary mortgage market use a combination of 5yr and 10yr Treasuries to track the relative value of mortgages.  It's pretty perfect, actually, because the average 30yr fixed mortgage almost always lasts between 5 and 10 years before the loan is refinanced or the home is sold.

So the 10yr is a good benchmark.  How does that help it influence mortgage rates?

The 10yr is like the aircraft carrier.  It goes where it goes based on the market forces and it brings along all manner of longer-term rates in the US: corporate bonds, municipal bonds, mortgages, etc. (or to extend the analogy, planes, rafts, boats, helicopters, you name it).  At any given time, those other vehicles may be right on the deck of the aircraft carrier, or they may be deployed some reasonable distance away.  Same story for mortgage rates generally moving with the 10yr, but being able to move higher or lower relatively, depending on circumstances.

You don't like that analogy?  How about the master and the dog?  You've seen the dogs I'm talking about... While they'll ultimately have to go where the master goes, they can tug relentlessly at the leash or plant their butts on the ground and refuse to move.  Mortgage rates have been doing more than a little bit of that sort of butt-planting recently, and I'm about to tell you why.

From here, we'll have to leave the analogies behind and dig into actual details.   Everything hinges on the point I made above about mortgages not lasting a full 30 years due to refinances and homes being sold.  For our current purposes, we only need to discuss refis.

A refi may be great for you because you'll get a lower rate and pay less interest, but that also means your old lender will no longer be collecting interest at that nice rate of return.  That's OK!  Your lender plans for that.  They know your loan won't last the whole 30 years and the rates they offer are adjusted accordingly.

What lenders didn't plan for was the massive and unexpected plunge in prevailing longer-term rates.  Whatever their expectations were about how long they'd be able to collect interest, they were too high!

This is all well and good for Treasuries.  The government has promised to never refinance those to pay you a lower rate of return than you initially agreed to.  For mortgages, on the other hand, it causes major problems.

The quicker mortgages are paid off, the less valuable they are to investors.  Those investors then offer lower prices to buy mortgages.  The price of a mortgage (or of any bond) moves in the opposite direction from the rate/yield associated with that bond.  Think of this price the same way you'd think of an upfront closing cost on a mortgage.  If you pay extra money down, you can get a lower rate.  You can also pay a higher rate and get lower closing costs.

Now look at it from the other side of the table.  If the lender pays more of your closing costs, you have to pay a higher rate.  If the lender gives you their best rate, they're going to pay much less upfront.  In other words, if lenders/investors are offering lower prices to buy mortgages, you're paying a higher rate, all other things being equal.

Fortunately, all of that drama plays out on a RELATIVE basis.  Investors decide on the value of a mortgage relative to benchmarks.  If they don't buy mortgage debt, what could they get by buying Treasuries?  If the 10yr is falling fast enough, mortgage investors can still pull back on their prices without actually pushing mortgage rates higher.  In OTHER other words, both mortgage rates and Treasury yields are falling, but Treasuries are just falling much faster.

Bottom line: the mortgage investor has to worry about you paying your loan off too quickly, which makes them pay less for your mortgage relative to Treasuries.  But if Treasuries fall far enough, this doesn't actually result in upward pressure on rates (the upward pressure is only RELATIVE to TREASURIES... after all, they're the benchmark!).

How about some charts showing how all this plays out?

The first chart simply overlays 30yr fixed rate movement and 10yr Treasury yields.  Note the solid connection before volatility increased in 2019.  The gap between the two lines was closing as Treasury yields moved back up heading into 2020, but has since blown out again due to recent market drama. 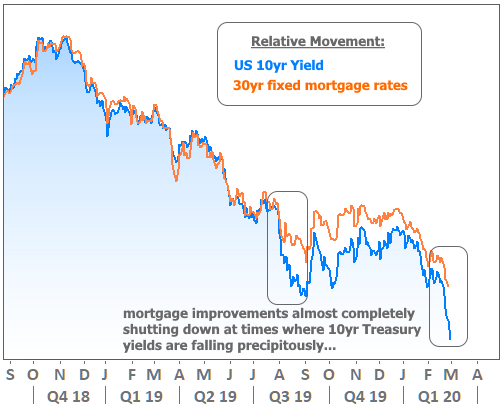 If we look at the chart above in the form of a single line measuring the distance between the two rates, it would look like this.  (The higher the line moves, the farther mortgage rates are above Treasury yields). 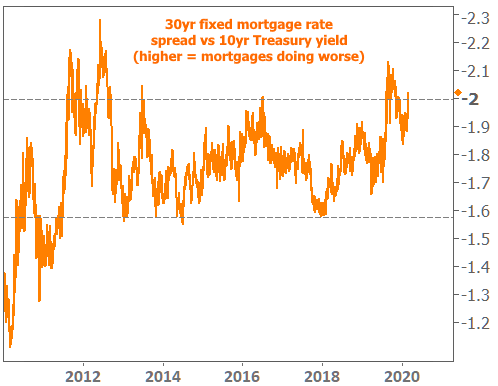 We can also look specifically at the bonds that underlie the mortgage market: mortgage-backed-securities (MBS).  These have moved in a fairly similar way to mortgage rates themselves as they are the key determining factor for mortgage lenders. 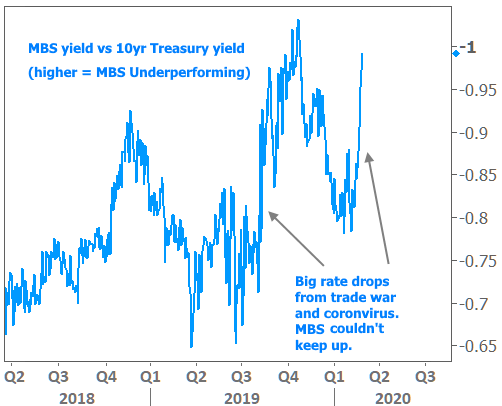 And the main reason I shared the shorter-term version of this chart was to show you the longer-term version that includes the financial crisis.  This is how bad things have been in the past.  The current drama is a walk in the park by comparison--especially considering mortgages are right in line with all-time lows. 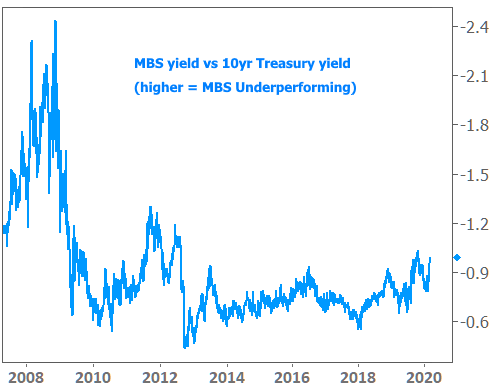 P.S. Other stuff happened in the market this week too, but this newsletter is too long for additional prose on those topics.  All of them will be covered in the links below.  Highlights include a big surge in home sales.  A reinvigoration of home price gains, and plenty of market drama surrounding coronavirus.  I can at least leave you with the 3 most interesting charts I prepared for the newsletter. The first one shows stocks vs bond yields in the longer term for context.  The second one shows how bond yields began moving lower as coronavirus became a threat, even as stocks ignored it.  The 3rd one shows the stock market playing catch-up. 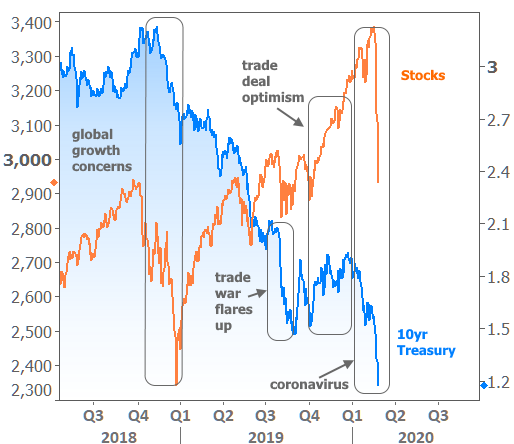 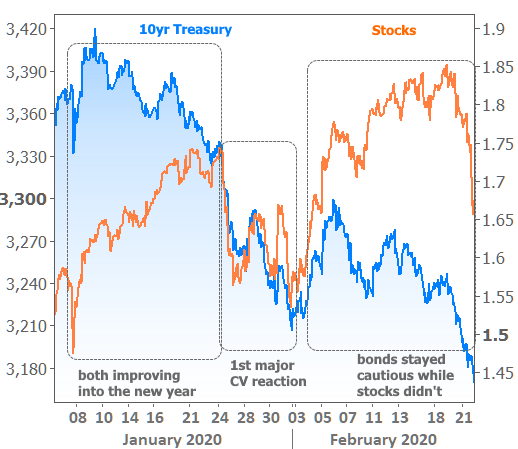 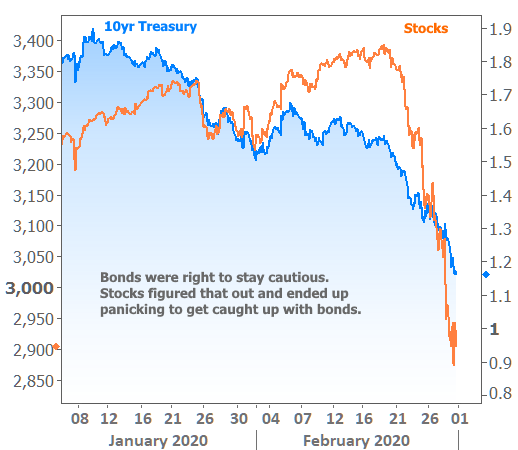