To understand what's at stake in the week ahead, we need to understand where we are and where we've been.  With that in mind, here's a quick recap of the past year or so in global macroeconomics.

Rates were near long-term highs in the first part of 2018 following the passage of the tax bill and generally strong economic data.  As seen in the following charts, this took a toll on loan applications, home sales and eventually on home values. 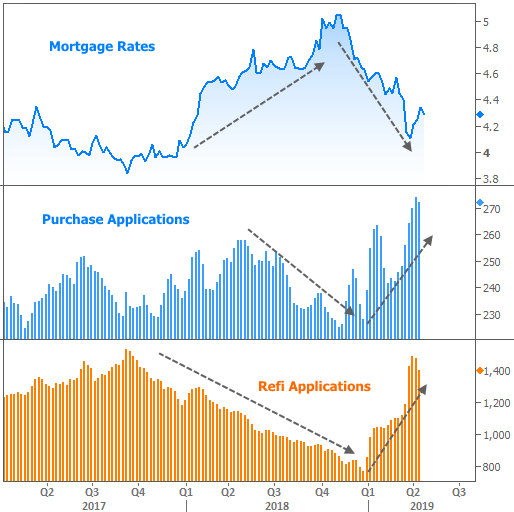 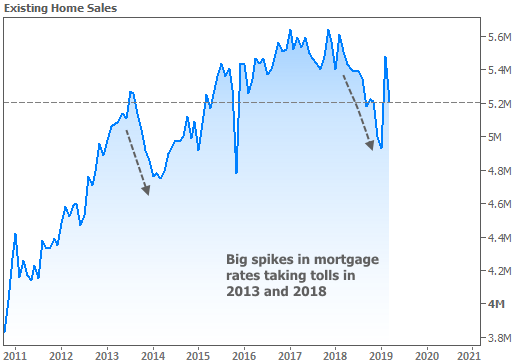 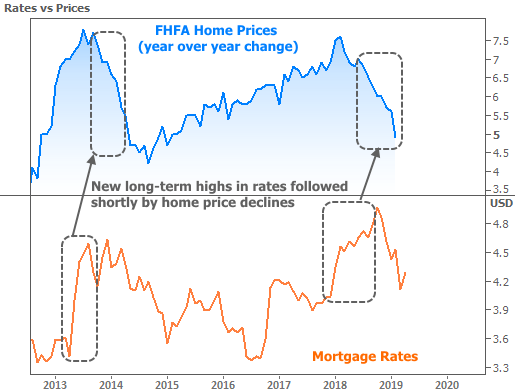 Rates surged to new long term highs in October and November due to ongoing improvement in US econ data among other things.  At the same time, concerns were mounting about economic contractions in Europe and China.  The following chart shows how debt yields (a proxy for economic momentum) were falling in those two economies while US yields were still rising. 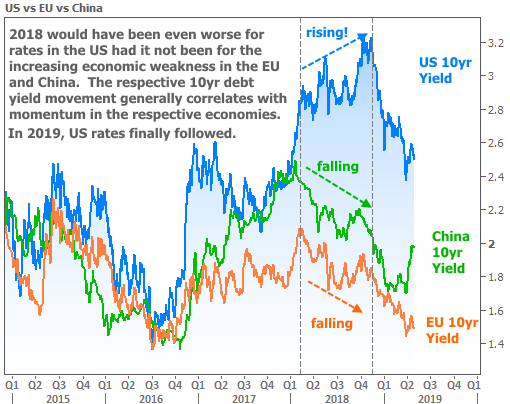 Eventually, the slump in foreign economies combined with a tough stance on rates from the Fed led US markets to follow suit.  Stocks and rates dropped abruptly before the Fed stepped in and drastically softened its tone in January.  That helped stocks recover and kept the good times rolling for rates (a softer tone from the Fed means rate hikes are less likely). 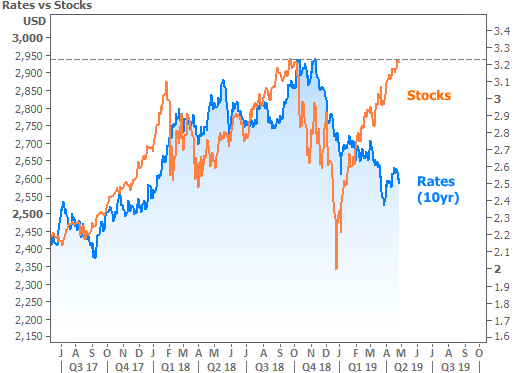 For several reasons, rates surged even lower by the end of March--so low that a correction was likely.  It's that move higher in rates that we've been discussing for the past few weeks and it got even more interesting this week.  Long story short, rates have been willing to recover a bit and hold their ground inside the new, lower range achieved in March.  Until this week, it looked like they might be moving back into 2019's previous range. 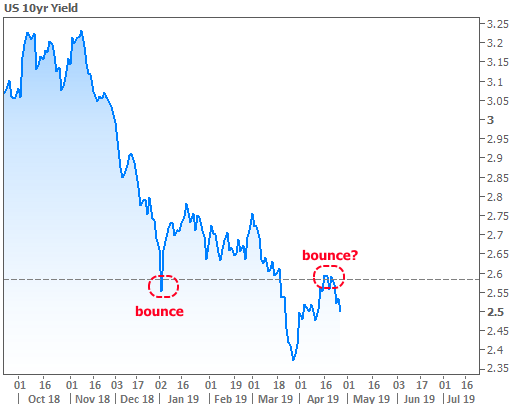 One reason for tempered reactions is that we haven't had a ton of important economic data in the past few weeks.  But that all changes next week.  Not only is the calendar packed on any given day, but the reports in question are typically the biggest market movers.

In and of itself, that would be enough reason to plan for potential volatility, but the data will also be joined by the Fed with a new policy announcement on Wednesday.  Given how surprised markets were by the March 20th announcement, there's a decent chance of meaningful changes in next week's update.

Of course, the Fed could end up being interpreted as fairly neutral and the economic reports could be the right mix of stronger and weaker such that rates don't end up too far from current levels.  But if the data is unified in its message, and especially if the Fed's message is in the same vein, it would likely result in the biggest move in rates in more than a month, for better (in the case of a friendly Fed and weak economic data) or worse (in the case of a hawkish Fed and strong data).

After Wednesday, all eyes will be Friday's big data combo with the jobs report 830am ET (Non-farm payrolls) and ISM's Non-Manufacturing index at 10am.