Interest rates are a hot topic right now, largely because they're surging to the highest levels in years depending upon whom you ask and what type of rate you're asking about.  There is a lot of confusion and even some misinformation about exactly what rates are doing.  Let's clear that up.

Is this going to be depressing?

At first, yes, but there's some light at the end of the tunnel.  Tune in to the last chart for that.

What do you mean by confusion?

There are many different kinds of "rates."  In the housing world, we're mostly focused on mortgage rates, but even then, there are several types of loan options that carry different rates.  We're talking about things like a 15yr and 30yr fixed versus a 5yr adjustable, for instance.

Just as there are different options for loan terms, there are many different types of bonds that trade in financial markets.  "Bonds" is a catch-all term that refers to a fixed-income investment--essentially "loans" that investors make by forking over a chunk of cash upfront in exchange for a set schedule of payments over time.

The quintessential set of bonds is found in the US Treasury market.  These are loans the  government gets from investors to finance the fiscal operation of the country.  If the US spends more money for any given amount of revenue, it may need to increase the amount it borrows.  The more it borrows, the more the US must increase the rate of return it's willing to pay in order to attract investors.  It's for these reasons that the revenue shortfall created by the tax bill caused a surge toward higher rates in 2017 and 2018.

You said there are different kinds of rates, so which rates spiked?

Great question.  In this case, rates moved higher across the board, but shorter term rates moved higher more quickly because Treasury said it would increase borrowing in shorter-term debt more than in longer-term debt.  For instance, 2yr Treasury yields moved higher much faster than 10yr Treasury yields as the tax bill came to fruition.  Contrast that to the taper tantrum of 2013, when the Fed indicated it was close to curtailing its longer-term debt purchases (something that played a key role in 10yr yields and mortgage rates going as low as they did in 2012). 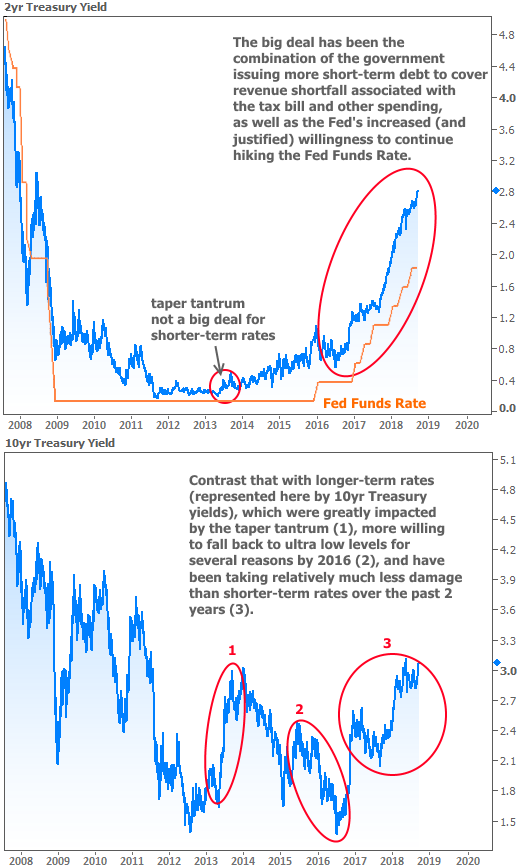 You mention Fed Funds Rate in the chart, and it looks important.  Why are you holding out on me?

I was getting there, I promise!  The Fed Funds Rate is yet another rate on our spectrum of various bonds/rates/debt.  It is the shortest of the short-term rates, governing the cost of financing on a mere overnight level.

There are other overnight rates (you may be familiar with the nearly defunct LIBOR), but the Fed's rate is extremely important because it is used as a policy tool to assist the Fed in achieving its goals of maintaining price stability and maximizing employment.  The easiest way to think of the Fed Funds Rate, however, is just to assume that a stronger economy (one that tends to have low unemployment and more inflation pressure) is like a car that's moving faster and faster.  By hiking its rate, the Fed is essentially tapping the brakes, trying to keep things from overheating.

But the chart makes it look like the Fed rate is following the 2yr Treasury yield.  Is the Fed behind the curve?

That depends whom you ask!  But the Fed certainly isn't as behind the curve as the chart would suggest.  The Fed only meets to set rates 8 times a year.  Meanwhile, Treasury yields can move every millisecond.  Investors are smart.  They have a good understanding of the factors that will likely result in the Fed hiking rates.  As such, Treasury yields tend to move higher in advance of Fed rate hikes.   Traders are looking at all of the incoming data and asking themselves if that data makes the Fed more likely to hike.  If the answer is "yes," traders make money (or avoid losing money) by getting in position ahead of time.

Great, but a mortgage lasts 15-30 years in most cases, so what's the implication for longer-term rates?  Why are mortgage rates getting hammered?

First of all, even though mortgage rates have a 15 or 30yr TERM, it's actually the average duration of any given mortgage note that dictates how investors will treat it.  In other words, if 30yr fixed loans tend to be refinanced or if the underlying homes tend to be sold in 7 years, the investor buying the mortgage debt is only tying their money up for 7 years.  Therefore, the comparable Treasury yield would be the 7yr yield.

Beyond that, the considerations that push shorter-term rates higher also have an effect on longer-term rates.  Investors ask themselves how those considerations will change the average rates of return they should expect over the next 5, 10, 30 years.  Simply put, they are adjusting rates higher to account for everything they can know about the present day and everything they are assuming about the future.

Then it seems like the shortest-term considerations would have the biggest effect on rates.  So why did the 2013 taper tantrum hurt long-term rates more than short-term rates?

Remember, it's all about supply and demand.  If more of a certain type of bond is being issued (i.e. government borrowing more debt) and demand for that debt doesn't rise at the same pace, the borrower will have to pay a higher rate of return to the lender/investor in order to get their money.  The Taper tantrum dealt with long-term debt exclusively.  The Fed represented a HUGE source of buying demand for Treasuries as well as mortgage-backed debt.

In other words, the Fed was a making a huge and guaranteed amount of loans each month to the US government.  The idea was to keep rates low and to stimulate economic activity.  At the time of the taper tantrum, the Fed hadn't even touched on the topic of hiking short-term rates, but because they were saying "hey... we're not going to be buying as many long-term bonds," longer-term rates moved quickly higher in order to entice enough demand to make up for the expected hole that the Fed was about to leave in the market.

Heavy stuff... Is there some sort of happy medium or cheat sheet so I know what's going on with rates?

All you really need to do is be aware of which rates are being discussed or presented from any given source.  If someone says "the Fed hiked rates," that's always going to refer to the Fed Funds Rate, unless that person is clueless.  If you're primarily interested in mortgage rates, just follow those from your favorite source or by staying in touch with your favorite mortgage professional.

As far as happy mediums go, there's a case to be made for the 5yr Treasury yield.  It's not necessarily the best choice if you could only check one interest rate each day (stick with the 10yr yield for that), but if you're looking to capture momentum that's affecting both long and short-term rates, it has a story to tell.

Let me guess... It's been telling a story recently?

The 5yr Treasury is indeed telling a story.  It's saying that investors are starting to believe that the factors putting upward pressure on short-term rates are increasingly relevant considerations for longer-term rates. 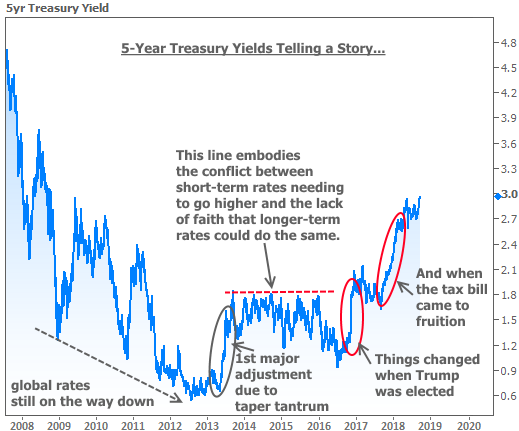 More simply put, everyone knew short-term rates had to rise fairly quickly as of early 2018, but there was enough skepticism about the longer-term economy to keep longer-term rates in check.  For instance, would the tax bill provide only a temporary sugar high?  Would some unexpected shock (trade war, emerging market drama, geopolitical drama, etc.) derail economic progress?  Would the increasingly bipolarized wealth in America cause unexpected problems for growth?

All these things and more led many investors to be somewhat skeptical about how high longer-term rates would go.  Some investors thought the aforementioned "sugar high" would already be fading by now.  Instead, it's only grown more threatening for longer and shorter-term rates alike.  Much of this was confirmed by some of the stellar economic data earlier in September--something we discussed in detail in the last newsletter.

You're right.  While that's good news for the economy, it is depressing with respect to rates.

It actually gets just a bit worse for mortgage rates, specifically, depending on the news you've heard this week.  The most widely-circulated stories on mortgage rates are typically based on Freddie Mac's weekly rate survey.  Freddie's numbers are accurate over time, but tend to underestimate the pace of movement when rates are volatile.  The green line in the following chart gives a better idea of how rates have been moving. 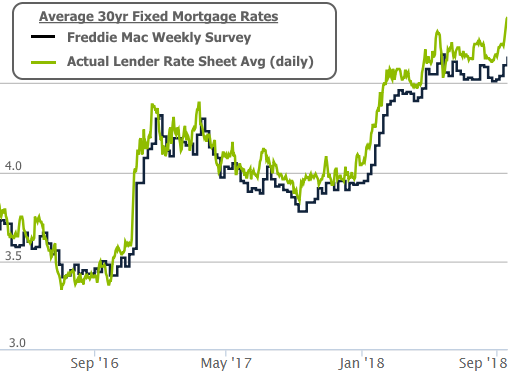 Yikes... Is there any good news?  Any silver linings?

There is always a silver lining, depending on your standards or how long you're willing to wait.  On a housing-specific note, we had several reports come in this week and they weren't nearly as gloomy as some of the recent housing data.  If anything, we're still getting the impression that a strong run in housing is 'leveling-off' as opposed to 'at risk of crashing.' 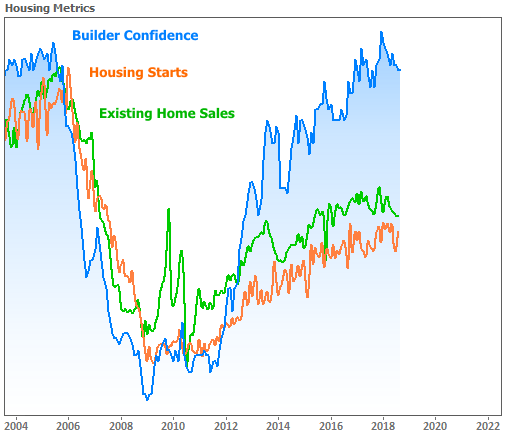 As far as holding out hope for a big drop in rates, that's a trickier topic.  The party line is that such a drop is not the sort of thing you want to plan on, even though it will almost certainly happen eventually.

How can you be so sure?

Economies/rates/stocks/employment/etc. oscillate in cycles.  The cycles are far from predictable in terms of scope and timing, but extremely predictable in the sense that there will always be ups and downs.  Given that we've mostly talked about longer-vs-shorter-term rates today, consider the following chart of 2yr vs 10yr Treasury yields.  Granted, history doesn't always repeat itself in the same way, but the implication is clear: longer-term rates tend to fall fairly soon after 2yr and 10yr yields hit the same level. 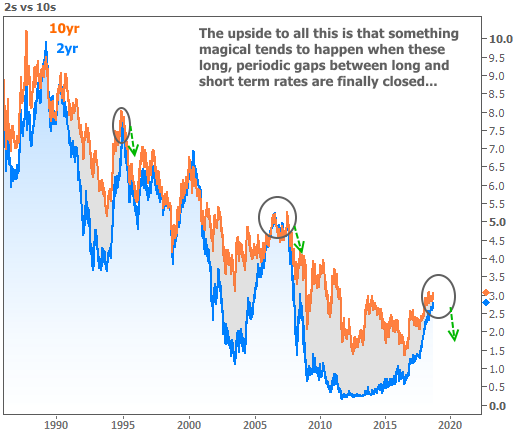 Whatever ends up causing a big-picture reprieve for rates, it's important to understand it could take a long time to materialize.  It could also happen next week if one of several unexpectedly awful things were to happen, but the cure is worse than the disease in those cases.  The most important thing about next week at this point is that Wednesday brings the Fed's next policy announcement.

This Fed meeting isn't important because of the chance of another rate hike.  The Fed is absolutely hiking next week.  Rather, investors are very interested in an update to the Fed's economic projections--most widely followed due to the dot plot showing each Fed member's outlook for the Fed Funds Rate.  The so-called "dots" are one of the most important considerations for interest rates across the board, including mortgage rates.  There's some small chance that anxiety over next week's Fed stance has played into this week's rapid rate spike.  If that's the case, and if the Fed's outlook is at least somewhat moderate, we could see rates recover a good amount of this week's losses.