Both New and Existing Home Sales came in lower than expected this week. Taken together with last week's big drop in Housing Starts, this raises obvious questions about the housing market. How much should you worry?

Incidentally, I posed the same question in last week's newsletter.  You can revisit it with this link or simply read on.  The answer is the same, and for mostly the same reasons, but we'll explore it a bit further this time.

Again, the short answer is "no."  And again, the long answer requires some more explanation.

If, for instance, your hopes and dreams rely on home sales continuing to rise without pausing, you may indeed have something to worry about.  For everyone else, all we're seeing so far is a fairly normal cooling-off period.

This can be seen in the following chart with Existing Home Sales settling into a sideways pattern.  Incidentally, this means we're sideways at the strongest levels ever seen in this data apart from the run up to the housing bubble.  With that in mind, some "normal cooling" might not be a bad thing. 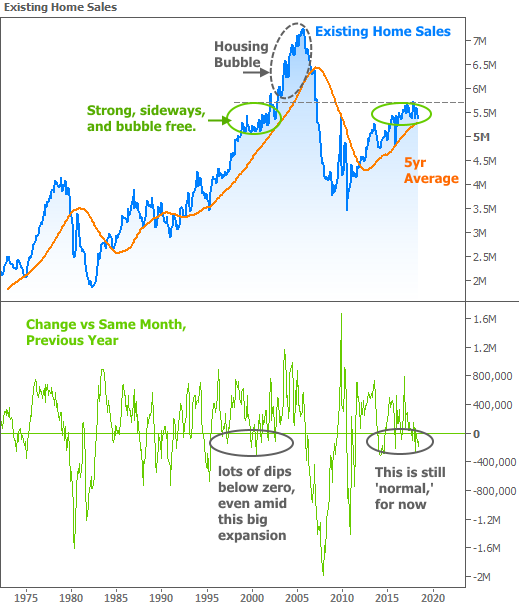 Whereas it might require a deep breath and some perspective to feel optimistic about existing sales, New Home Sales are still very clearly in a linear uptrend.  They just happen to be experiencing a move lower INSIDE that trend--one that they've seen at least 4 times in the past 5 years.  In fact, the periodic corrections of the past few years are clearly milder than those seen during the previous expansion (as seen at the bottom of the following chart). 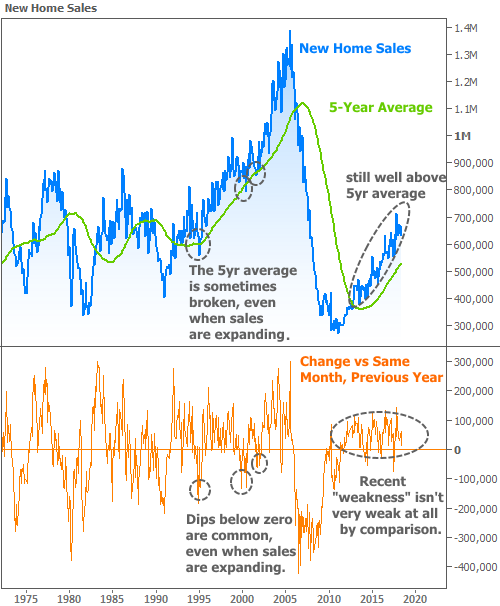 It makes sense that New Home Sales are outperforming.  Relative to that strong, stable baseline from 1998-2002, they've lost much more ground than existing sales and they haven't recovered as quickly.  The following chart shows the percent change in sales from the 1998-2002 time frame.  Notice that existing sales have been above the baseline for several years.  Like we discussed last week, there are much worse places to be leveling-off. 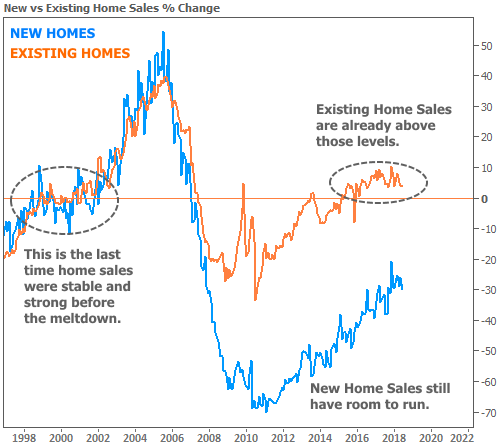 So, does all of the above mean everything's fine and there's no reason to worry?

It's rarely a good idea to think about the future market outlook with such certainty.  What we can be certain of is that there's no obvious reason to be alarmed by currently available data (especially the New Home Sales data).

Yes, sales have declined in recent months, and Existing Sales are clearly in a sideways pattern.  But then we might ask ourselves if we'd really want to see Existing Sales continuing to push the pace if that increased the risk of a sharper correction in housing.  If we don't dip too far below current levels, it'll be something that almost everyone can live with and it will set a stronger foundation for future improvement.

Of course future potential can always be derailed by unforeseen shocks, and market participants tend to worry more about that when certain headwinds start piling up.  One of the current headwinds is the recent rise in rates.

As of last week, rates were just beginning to inch higher from a very narrow range (roughly 2.82-2.90% in terms of 10yr Treasury yields).  This week essentially confirmed that breakout with yields getting close to 3%.  Conforming mortgage rates experienced a similar move higher for most lenders. 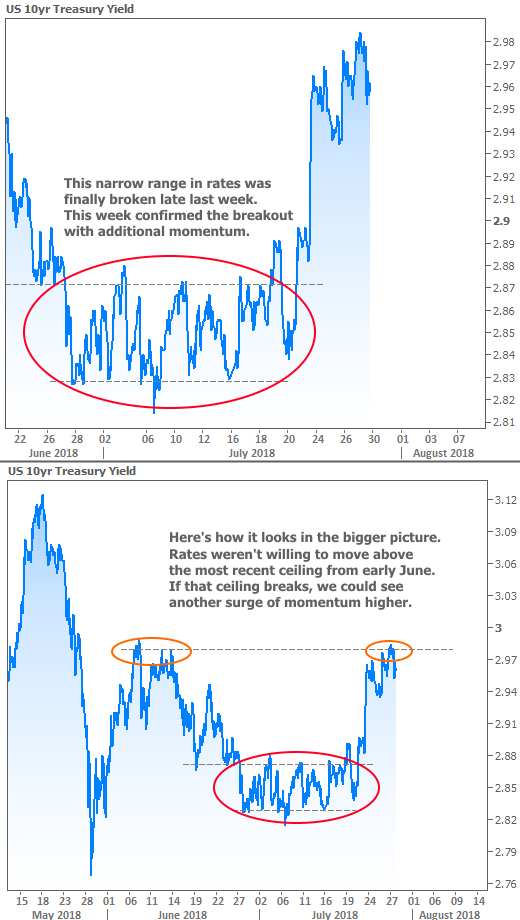 Next week brings an incredibly active calendar of economic data and events.  If you had to name the 2 biggest calendar events for interest rates over the years, Fed Announcements and Nonfarm Payrolls (NFP) data would be at the top of the list.  We get both next week as well as a slew of other data.  On a housing-specific note, Monday's Pending Home Sales data will give us an idea of what to expect from next month's Existing Sales numbers.