As expected, the Fed raised rates this week.  Mortgage rates and 10yr Treasury yields (which aren't directly tied to the Fed Funds Rate) actually moved lower for the rest of the week.  How did that happen and what might it mean for the bigger picture?

Remember, the market is all about "pricing-in" whatever it thinks it knows about the future.  If the Fed is 99% likely to hike rates, the market effects of a Fed rate hike are already 99% in place ahead of time.  That's how things happened this week.  As such, other parts of the Fed's announcement were able to have their own effects.

At every other meeting, the Fed releases updated forecasts on key economic metrics.  Investors are always most interested in the updated rate hike forecast, frequently referred to as "the dots" (because it's presented on a dot plot).

If more of the dots are moving higher, it means the Fed sees rate hikes happening sooner or more often.  The following chart combines the previous dot plot from March with this week's changes. 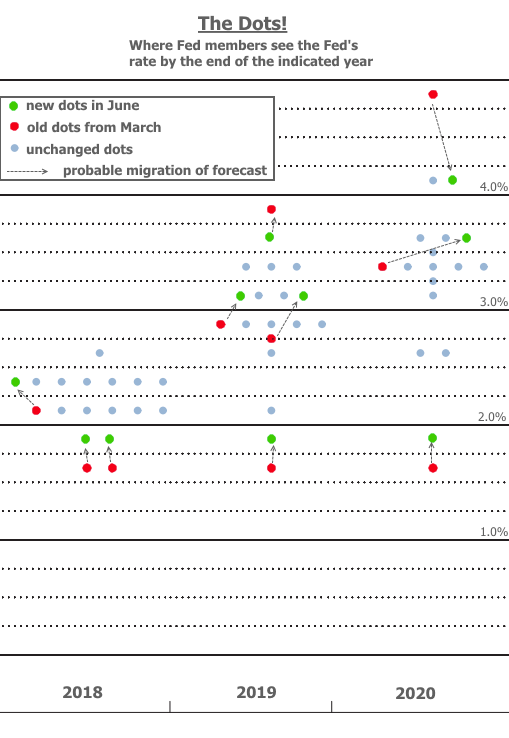 The chart tells us the Fed's rate hike outlook accelerated by just a bit.  Markets reacted with an immediate move higher in rate.  Keep in mind though, that because the Fed's rate dictates overnight rates, it has less of an impact on longer-term rates like 10yr Treasury yields and mortgage rates.  In fact, as the next chart shows, longer-term rates actually managed to improve by the end of the week while shorter-term rates remained higher. 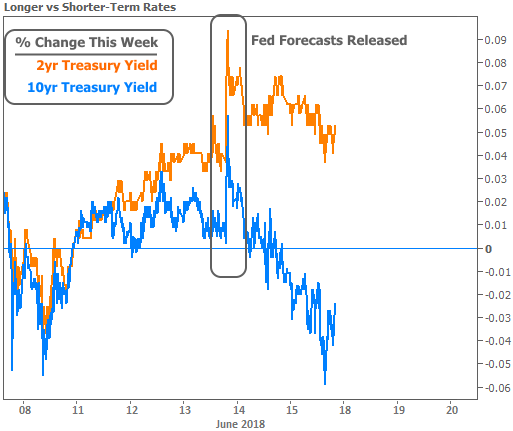 The improvement in longer-term rates began with Fed Chair Powell saying that rates are getting closer to a "neutral" level.  A few of his other comments were in the same vein, but all in all, his press conference was well-balanced.  The correction in rates seen above has more to do with the fact that markets were positioned somewhat defensively heading into the this week's big ticket events.

Rounding out those events, and also helping to lower traders' defenses, was Thursday morning's policy announcement from the European Central Bank (ECB).  Just like Fed bond buying is/was a big deal for rates (remember the taper tantrum?) so too is the fate of the European bond buying program.  We knew they would be discussing their own tapering decision soon, because the program expires in September.

Rather than offer clues and make us wait several months, the ECB surprised markets by announcing their tapering plans in full.  They offset the potential ill effects of that surprise by pledging to keep rates low through next summer--a bit longer than markets expected.  This helped rates continue to improve through Friday morning.

Despite the obvious improvement in bond markets, many major media outlets published stories saying that rates rose this week. This discrepancy is common due to over-reliance on Freddie Mac's weekly rate survey, which only really captures rate movement from early in any given week.  Because most of the improvement happened in the 2nd half of the week, much of the news is at odds with reality.  The average lender made it back to last week's levels. 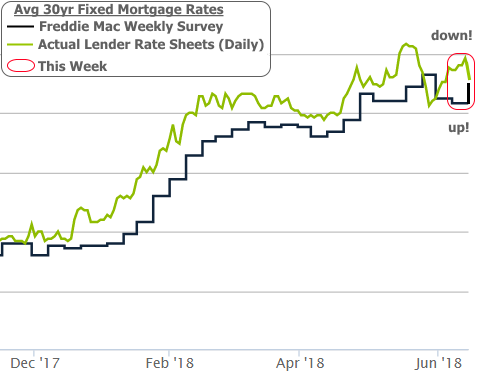 Making it through this week's big central bank announcements without rates rising means we have a chance to see a ceiling begin to take shape in the bigger picture.  Even if the current potential ceiling doesn't end up looking like 2014's, optimists are hoping for at least some relief. 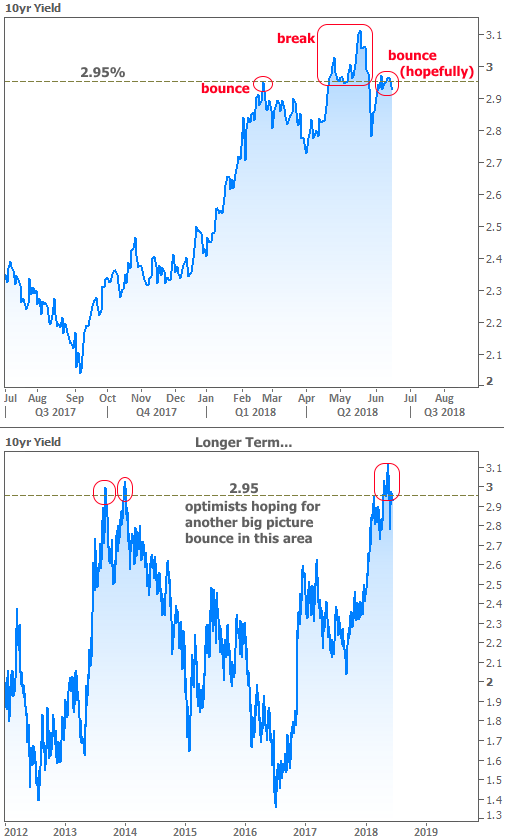 Next week's economic reports aren't big market movers, but many of them are housing-related.  "Holding steady" is the name of the game as far as forecasters are concerned.  Builder sentiment is expected to remain unchanged near recent highs on Monday.  New Construction (Permits/Starts) is seen staying around an annual pace of 1.3 million on Tuesday.  Then on Wednesday, the consensus is for a modest 1.5% improvement in Existing Home Sales after last month's 2.5% decline.