An abrupt stock market sell-off dominated the week's financial news. It was the kind of move that gets everyone talking (and speculating, and worrying, and explaining). In those conversations and in the news, certain concepts have garnered broad agreement. Unfortunately, just because something is often repeated, it's not necessarily true.

To make a long story short, almost any explanation you'll hear for this week's nosedive in stocks will pin the blame on rising interest rates, inflation concerns, or a combination of the two.  While there are a few elements of truth in these explanations, they're mostly bogus, as the charts below will clearly show.

I'll admit, it's tempting and even logical to notice that rates are at the highest level in years and assume the extreme behavior in one major market sector has something to do with the extreme behavior in the other.  This week's short-term charts validated that assumption, as long as those charts ignored important considerations like the percent change in bond prices compared to the percent change in stock prices.

The upper pane of the following chart does just that.  In it, we see high rates at the scene of Monday's big drop in stocks.  When rates moved back up into the 2.8% range, stocks dropped again.  Case closed, right?  10yr yields over 2.8% are bad for stocks!  Right?

Not exactly...  While it's true that rates are at long-term highs and that stocks seemed to respond, in terms of percentage change, rates barely budged this week compared to stocks.  When we look at the price of 10yr Treasury notes (which serve as the foundation for long-term interest rates in the US), investors weren't taken on nearly as wild of a ride. 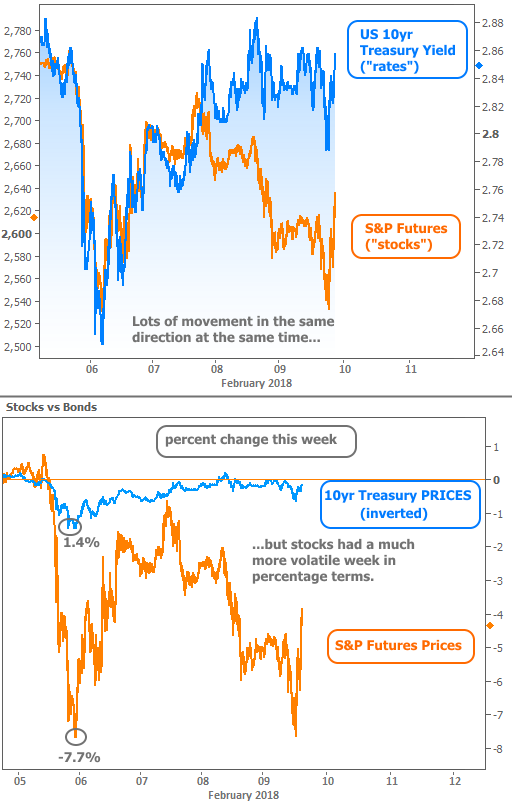 In other words, it took a lot of movement in stocks to make a comparatively tiny dent in rates.  Rates might not have moved that much this week otherwise, or they may have done what they've been doing and simply continued higher.  Either way, higher rates and an accelerated Fed rate hike outlook haven't been an issue for almost the entire time that markets have trading the potential effects of the tax bill (the key fundamental market motivation since September).  One must wonder: why now? 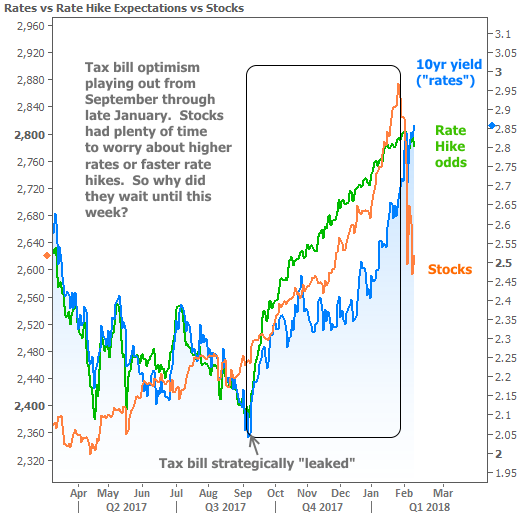 There are two arguments you might hear for the "why now" question.  The first concerns outright levels.  Specifically, proponents of this theory suggest that the stock market was OK with 10yr yields in the 2.6% range, but that stocks started to freak out when rates moved over 2.8%.  In other words, there's a limit to how high rates can go before stock investors assume collateral damage.

It's true that higher rates can and will restrict economic activity, and thus cause potential headwinds for stocks.  The only problem with choosing a magic line in the sand is that rates have been higher in the past, and it hasn't had the same effect that's being argued this week.  Not only that, but the trip to those levels was much more abrupt in the past without so much as an inconvenienced sigh from the stock market. 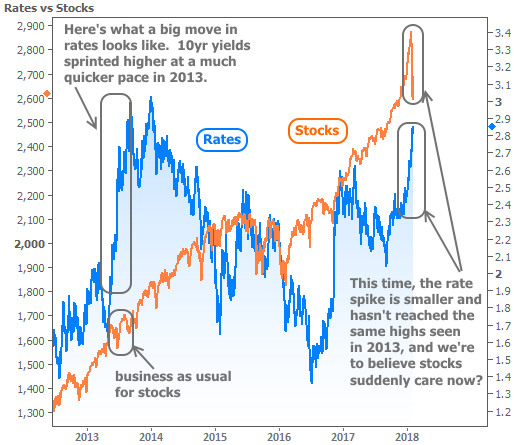 When confronted with that chart, proponents of this week's stock market scapegoat hunt might turn their attention to inflation.  They might say 2013 was different because inflation expectations hadn't yet become worrisome, and that new fiscal policies and a tight labor market are creating major inflation risks.  Here too, the conceptual part of the analysis would work just fine were it not for that pesky little matter of past precedent.

The following chart shows the S&P overlaid against market-based inflation expectations.  It's pretty conclusive.  In fact, one could use it to suggest that falling inflation gave stocks pause in 2015--the opposite of the relationship being argued this week! 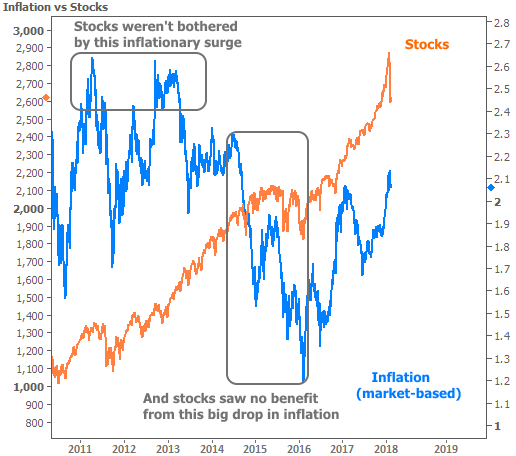 Of course, that's not what gave stocks pause in 2015, but that's exactly the point.  Inflation is not the scapegoat we're looking for.  It's just another interconnected cog in the global financial system and will therefore periodically exhibit certain degrees of correlation to other cogs.  This is really good to remember when someone tells you 2 things in financial markets are connected.  They usually ARE connected, but usually not as much as it seems.

If you're waiting to hear what actually caused this week's drop in stocks, I'm sorry to disappoint.  I can only tell you what DIDN'T cause the drop.  I will say that the truth is almost always more nuanced and complex than the easy answers offered up by news stories.  While it may not be as glamorous or conclusive as playing the blame game, I do know that while any given market is moving surprisingly higher for a surprisingly long time with surprisingly low volatility, the eventual move back in the other direction is simultaneously becoming bigger and more inevitable.

But enough of this hashing out of who did what to whom!  Things are what they are!  Rates are where they are.  Even though there's always a chance they'll bounce lower, most of the industry is bracing for more upward pressure in 2018. 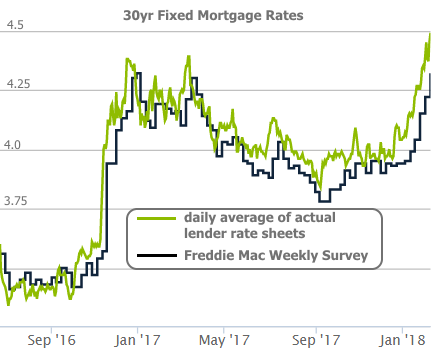 Higher rates create obvious challenges for the housing and mortgage markets, but so far, those challenges have been slow to crop up.  Most of the recent housing data has been solid.  In fact, just this week, Fannie Mae's Home Purchase Sentiment Index hit the highest levels since its inception in 2011.

In separate news, mortgage applications managed to improve, even if only slightly.  Still, any improvement is striking considering the data is seasonally adjusted.  That means applications aren't merely improving because the Spring homebuying season is approaching.

Granted, we could simply be witnessing some delayed reaction to rates that are finally getting high enough to throw a wrench into the housing market's engine.  If that's the case, it will become increasingly apparent in February's housing-related data (released in March). In the meantime,  weekly reports (like Mortgage Applications) will offer clues as early as next Wednesday.