So far this year, interest rates (including mortgages) have spiked at the quickest pace since the US presidential election. They're currently at levels not seen since early 2014. It was all anyone in financial news could talk about this week, but some of that conversation should be taken with a grain of salt.

I'm not here to minimize the impact of the rate spike.  There's no doubt that it's been quick or that it brings rates into unpleasant territory.  The move has also been more methodical and determined than past examples of big rate spikes.  Bond markets (which dictate rates) spent the 4th quarter winding up for the next big move in a very linear consolidation pattern (red dotted lines below) centered on 2017's previous highs (red circles).  When rates finally broke out, there was no question as to which side they'd chosen. 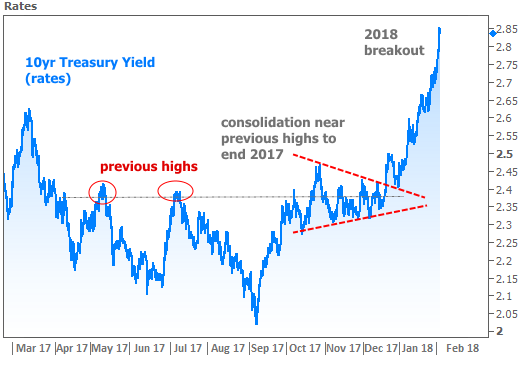 The methodical and determined nature of the move is one of the problems.  Market commentators prefer to pin big moves on clearly-defined, individual events or phenomena.  For instance, following the election, the best guess was that Trump's probable policy path would create growth, inflation, or simply more bond market supply than traders wanted to buy.  All of the above were logical reasons for the quick spike in rates.  While a lot more could be added to that conversation, there was no question about the catalyst because more than half of the damage was done in the 3 days following the election.

This time around, there's no similar example of concentrated movement following a major event.  It's really been a team effort.  Still, there are a few usual suspects to examine any time rates make a big move without an immediately apparent motivation.

The first suspect is inflation.  Higher inflation (actual or expected) pushes rates higher, all other things begin equal.  So it's only logical to take a hard look at inflation if we're having a hard time explaining a rate move.  But while inflation expectations are certainly a factor in the current move, a closer look quickly shows us it can't possibly be the only motivation.

The following chart breaks out the 10yr Treasury yield (the quintessential benchmark for longer-term lending rates in the US) into an inflation-adjusted component, and an implied inflation component.  In other words, rates are essentially 2 things: inflation expectations and everything else.  Adding them together gives us the actual 10yr yield.  As seen in the chart, the non-inflation component still accounts for most of the post-election rise in rates.  It also accounts for more of the abrupt move seen so far in 2018 (the inflation component has been moving higher more steadily and for longer, by comparison). 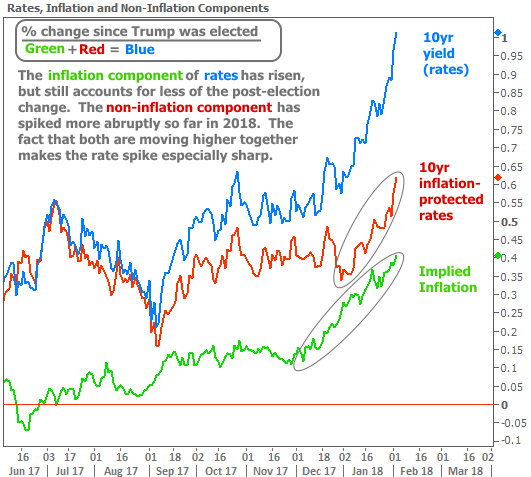 The other usual suspects are monetary policy (i.e. how friendly the Federal Reserve will be toward bond markets) and fiscal policy (i.e. how many new bonds will the government need to issue).  In general, the Fed and other major central banks have been less and less friendly toward bond markets.  The Fed is expected to continue hiking shorter term rates and to continue decreasing the amount of bonds it buys.  Both actions put upward pressure on longer-term rates.

On the fiscal side, the first year of the new tax system (as well as any other new spending initiatives) carry implications for increased Treasury issuance.  In other words, the government is going to issue more debt so it can pay for "stuff."  More debt supply implies lower debt prices, and lower debt prices result in higher rates.

In short, we have all of the usual suspects in play this time around.  They're all looking guilty.  In fact, it looks like they've all been working together to do maximum damage to rates.  As you can appreciate, without one singular event to mark a shift in Fed policy, inflation, or fiscal policy, it's only logical that we would NOT have the same sort of 3-day spike seen after the presidential election.  It's unfortunate that most "experts" feel compelled to explain things in the context of singular developments, but if you didn't already know better, now you do.

Adding to the problem was the fact that Friday's news showcased two great examples of convenient "singular development" type explanations.  Both were bogus.

The first was that the as-expected jobs report caused a massive intraday rate spike.  The theory varied depending on who was explaining it.  Some pundits said the jobs number was just "really solid," while others focused on the wage growth component of the data coming in at the best annual pace of the entire recovery.

This point about the annual wage growth number borders on comical because the wage component of this month's data fell perfectly in line with the median forecast.  The previous month was revised a tenth of a percentage point higher, resulting in 2.9% year-over-year wage growth as opposed to the 2.8% expectation.  A tenth of a percentage point in year-over-year wage growth is not now, nor has it ever been, a basis for a rapid move to the highest rates in more than 4 years.   Does it help?  No... but it isn't what hurt us.

What hurt us is the fact that traders are increasingly lining up to get out of the bond market because they're increasingly seeing the writing on the wall from the usual suspects discussed above.  Different traders realize and react to this reality at different paces and by different magnitudes.  The change over from January to February was a natural barrier for certain traders who had to hold a certain mix of bonds for month-end reporting.  They were suddenly free to make new trades as February began.  This resulted in a huge rate spike on Thursday.  Then on Friday, they waited to make sure there wouldn't be a big miss in the jobs number as that would have cost them a lot of money in short order (traders definitely use the jobs report as a focal point for short-term strategy).  When the jobs report came out in stronger territory, it opened the floodgates.  Importantly, the strong jobs number did NOT create the flood.  The historical street cred of the data simply acted as the floodgate.

Friday's other singular development actually used rates as an explanation for the big losses in the stock market.  You couldn't see 30 seconds of financial news without someone blaming the rate spike for the stock sell-off.

Not really.  While there are surely plenty of investors out there who might jump off the fence and decide to sell stocks because someone else said higher rates are scary, there are surely nowhere near enough of them to cause a sudden, sharp shift in equities.  Don't overcomplicate this one...   People are selling stocks because other people are selling stocks (and because everyone's nervous about how high and stable stock prices have been).  When higher rates actually exert pressure on stocks, it's a much slower and more subtle phenomenon.  If anyone argues this point with you, just show them all the recent examples of stocks and rates moving higher TOGETHER. 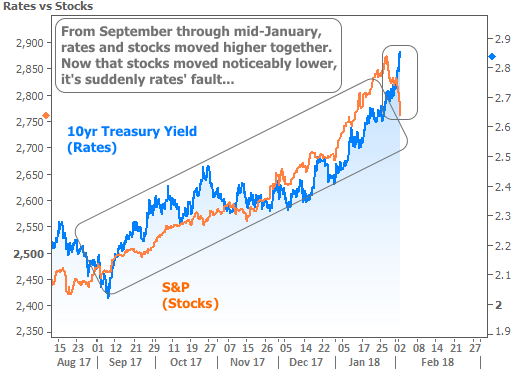 How is all of this drama playing out in the housing and mortgage markets?  Any time 10yr Treasury yields are at multi-year highs, mortgage rates aren't likely to be too far behind.  Mortgages hadn't quite crossed that dubious threshold as of last week, but this week was a different story.  Although this chart doesn't show it, you'd have to go back to early 2014 to see higher rates.  Many lenders are up into the mid 4's on conventional 30yr fixed quotes for well-qualified borrowers. 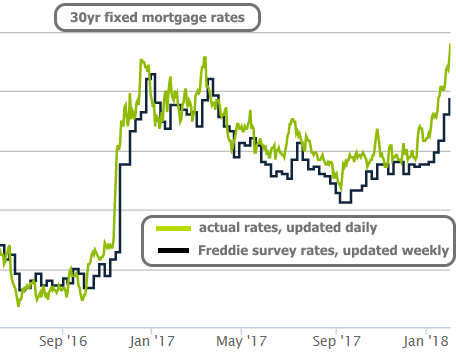 In terms of refi demand, the silver lining to languishing application numbers is that they just don't tend to go much lower.  Higher values have kept the cash-out refi demand fairly steady.  If we're to see fallout in mortgage apps, the purchase side of the market looks like it has more to lose, but it's certainly not showing signs of distress at the moment. 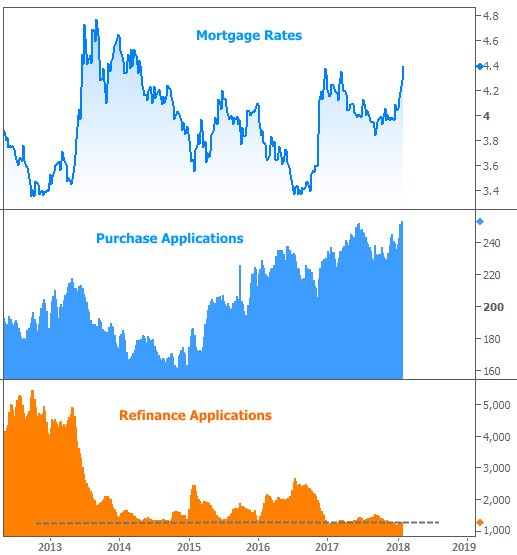 Home sales data has been similarly free from distress.  This week's biggest sales report was the National Association of Realtors' Pending Homes Index, which is something of an advance indicator for the bigger Existing Home Sales report.  Pending sales gained a bit more than economists expected, but the caveat is that the data was collected before this week's rate spike took place. 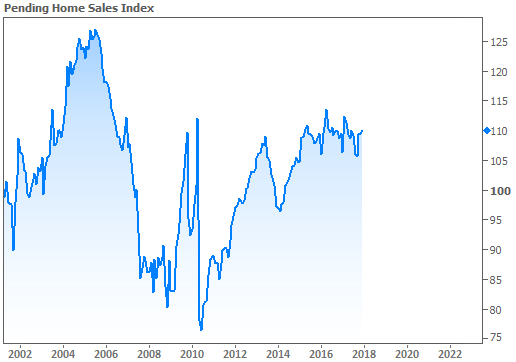