Tensions are running high on tax reform.  The Senate was able to advance its bill through committee despite a shouting match over whether the bill disproportionately benefits the rich.  The House passed its version of the bill, but the Senate won't take it up until after Thanksgiving.  Even then, we may see several major changes before a passable version begins to take shape.

For now, both bills leave some homeowner tax incentives on the chopping block. Critics decry the move as a major blow to the housing market. If they're right, the housing data released this week will soon look like a collector's item.

As written, the House version of the new tax bill would limit the deduction for mortgage interest as well as a portion of state and local property taxes. Homes bought or refinanced before Nov 2nd would be grandfathered in under the existing tax code.

In other words, October's housing data would not yet be affected by apprehension over potential tax changes.  Incidentally, October's New Residential Construction Report came out this week, and it was just shy of its best levels in a decade--at least in terms of Housing Starts, the report's headline metric.  The same can't quite be said of the Building Permits metric, but it was nonetheless in solid territory, near its highest post-crisis levels. 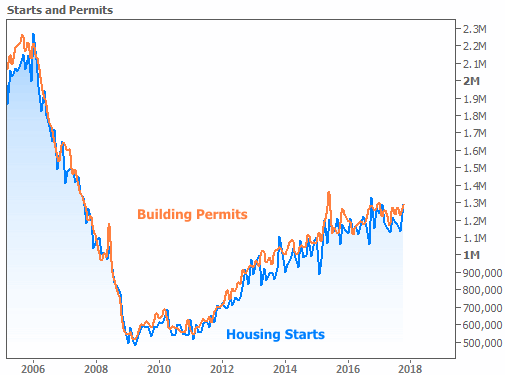 Even after the next round of data (which includes homes that COULD be affected by tax changes), we should remember two things.  First, at least when it comes to Starts and Permits, the contracts for new construction and ground-breaking for November's numbers will largely have been in place before the November 2nd cutoff.  Therefore, to whatever extent potential tax changes spook the housing market, we wouldn't see it in these numbers until January at the earliest.

More importantly, in terms of median home prices, mortgage amounts, and tax brackets, the backbone of these construction numbers won't be heavily impacted by proposed tax changes. Combine that with lobbying groups actively trying to salvage as many homeowner tax incentives as possible, and it's easier to understand this week's other key housing report.

The National Association of Homebuilders (NAHB) is one of the groups voicing vehement opposition to the housing-related changes in the tax bill.  Yet their members were in good spirits this month as seen in the NAHB's Housing Market Index (a measure of builder confidence) rising to the 2nd highest level since before the housing crisis.  In fact, builder confidence is generally in the same territory as the height of the housing boom! 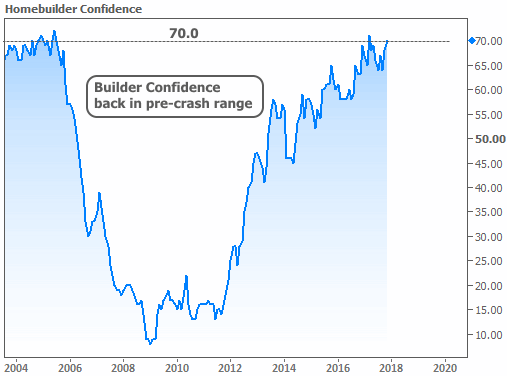 In the spirit of "waiting and seeing," interest rates improved slightly this week.  This keeps them locked in a consolidative trend (higher lows and lower highs) that's been underway for more than a month.  It's the bond market's way of expressing indecision, and for now, the trend suggests indecision could linger at least through early December.  Even if we apply some esoteric math to recent rate movement and derive a line that measures momentum, that line has been almost perfectly flat for several weeks.

The upcoming Thanksgiving week is a tricky one for market watchers.  Many market participants are out of the office, either mentally or physically.  Lighter participation and volumes open the door for volatility without regard for underlying data and events.  We've often seen rates go one way for no apparent reason only to bounce back in the following week.  Bottom line: anticipating future rate movement is always a guessing game, but for Thanksgiving week, that's doubly true.