Last week was dominated by the release and parsing of the GOP tax bill in the House. This week the Senate fired back with its own bill. Stocks and bonds both lost ground in response, but is the tax bill the only scapegoat?  Is it even the most important scapegoat?

Spoiler alert: no!  Especially with respect to rates, the tax headlines were not the first thing on the mind of bond traders as they pushed interest rates to 2-week highs.  We'll address those less overt considerations, but first let's bring ourselves up to speed on the new tax bill.

At first glance, the Senate's version might seem better for housing because it retains the mortgage interest deduction (neither version retains HELOC deductions).  But the more important issue is the elimination of other deductions that would normally tip the scales for some taxpayers in favor of itemizing.

Among those who continue to itemize, the Senate bill would provide a slight edge for homeowners with mortgages closer to $1 million while the House version would be more meaningful for homeowners with loan balances closer to the $500k mark because it retains the $10k property tax deduction.  The National Association of Realtors issued an official form letter decrying the perils of the House bill.  Preliminary comments from NAR President Elizabeth Mendenhall suggest a similar stance on the Senate version.

Brainteasers aside, this week's measurable drama centered on a spike in interest rates.  Given the proximity to the tax plan announcement, it's fair to wonder if there was some connection.  It even looked like the House tax bill pushed stocks higher and rates lower while the Senate tax bill had the opposite effect. 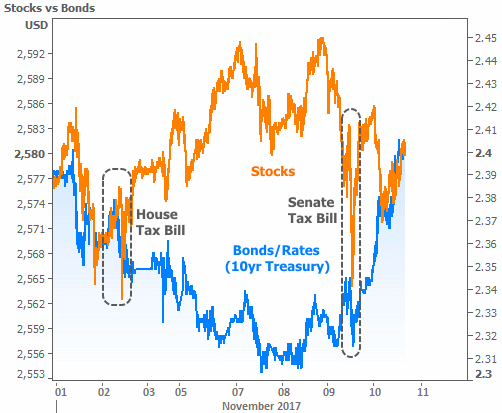 But we'll have to dig deeper to get to the bottom of the volatility--at least for bonds and rates.  Fortunately, there are other explanations that fit even better than the tax bill.

The first has to do with European bond markets.  The European Central Bank (ECB), recently announced its own version of the sort of tapering (a gradual decrease in bond buying) that the Fed announced in late 2013.  Both central banks opted for 9-10 month sunsets on bond purchases.  Investors are wondering if the ECB will stick to its gameplan or if they'd be open to extending bond purchases if officials deemed it necessary.

We heard from two ECB officials this week who made a case for sticking to the gameplan.  The less likely the ECB is to resume buying bonds in the future, the more upward pressure it puts on interest rates.

European interest rate movement definitely has an effect on rates in the US (and vice versa).  With that in mind, a case could easily be made for European rates leading the way higher for US rates with the latter pausing for half a day (notice the blue line doesn't immediately follow the green line higher) to digest the Senate's tax plan news.  Here's the same chart from above, but with European bonds added into the mix. 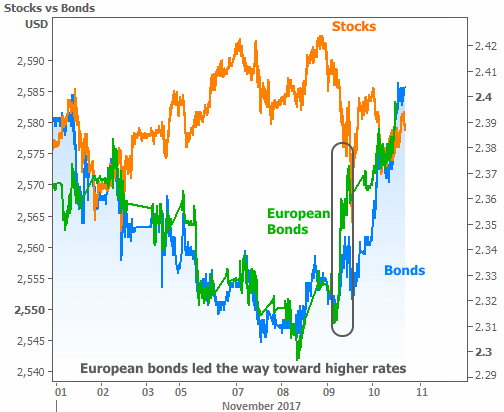 The final consideration is almost too esoteric to mention, but it is important to bond markets (which dictate rates) at the moment.  It has to do with the yield curve--the spread between longer and shorter term Treasury yields.

The point is that the yield curve has plunged to its lowest levels (narrowest gap between 2 and 10yr yields) since before the Financial Crisis, and when the curve hits historically low levels, it can prompt a bounce in longer-term rates. 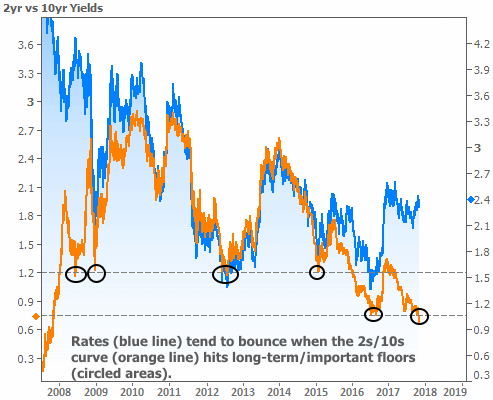 While there are underlying reasons the curve is doing what it's doing, the short-term trading reaction is purely technical.  In other words, traders seize opportunities to push the curve back up when it enters the black circle areas in the chart simply because it's entering those black circle areas (and not for some fundamental reason like economic data or tax bill headlines).  That push often involves rising longer-term rates like 10yr Treasuries and mortgages.

Next week is critical because this week's rate spike brought 10yr yields to an important ceiling at 2.40%.  In general, rates have been more willing to challenge ceilings as opposed to floors recently.  That behavior tends to foreshadow rising rates in the coming months, but a strong bounce at a 2.40% ceiling (especially if it's followed by a break below 2.28%) would be a major coup. 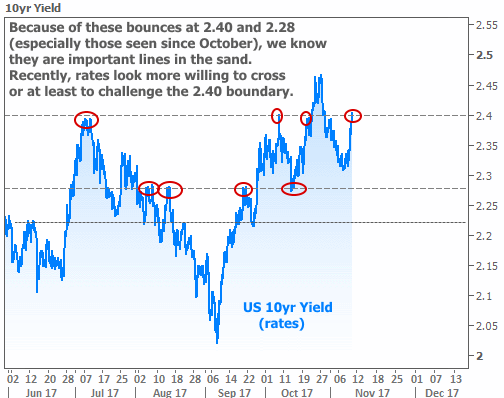