The GOP tax bill dominated news headlines this week, especially after its official announcement on Thursday. The housing industry was quick to lambaste several of the provisions as having massively negative impacts.

I won't get into a judgment of bill's pros and cons (though Homebuilders and Realtors are happy to oblige), but I can offer some perspective that may help address the question of housing market fallout.

First thing's first: we have no idea what the housing market fallout will be yet because this bill is still just a bill (and yes, it is likely "sitting there on Capitol Hill").  Unlike the charismatic little cartoon, this particular bill isn't going to serve as a shining example of the legislative process.  It is a starting point... a rough draft.  Some of the deepest lobbying pockets will certainly see to that and few are deeper than the National Association of Realtors'.

By the time we add the lobbying efforts of Builders and Mortgage Bankers to the mix, there is already a lot of resistance to what many see as the bill's most notable feature: a change of the mortgage interest deduction (MID) limit to $500k from $1 million.

The MID has long been considered sacred with respect to tax code.  It was one of the few interest deductions that successfully evaded the Tax Reform Act of 1986.  That made comments from Jerry Howard, CEO of National Association of Homebuilders (NAHB) all the more interesting.  Howard likened the possible effects of the current bill to the 1986 legislation, saying "after that tax bill passed, there was a significant housing recession."  He also noted that it would jeopardize homeownership for millions of families.

There's some truth to some of this, but to whatever extent 1986 continues to be used as a talking point for the current tax bill, it's worthwhile to brush up on historical facts.

It's true that construction numbers dropped after the 1986 tax bill, but not because homeowners were any less able to deduct mortgage interest.  The Tax Reform Act of 1986 actually marked a shift in tax policy in favor of individual homeowners at the expense of landlords, developers, and builders.  Homeownership actually didn't change much during that time, but the nature of borrowing money changed in a major way. 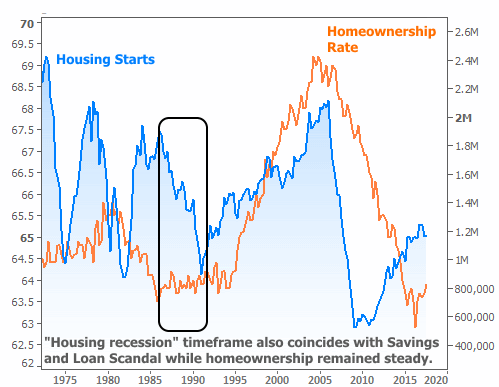 With the Savings and Loan crisis blossoming at the same time that builders were losing valuable tax incentives, it's no surprise that construction declined, but it was the multi-family sector that did the most damage. 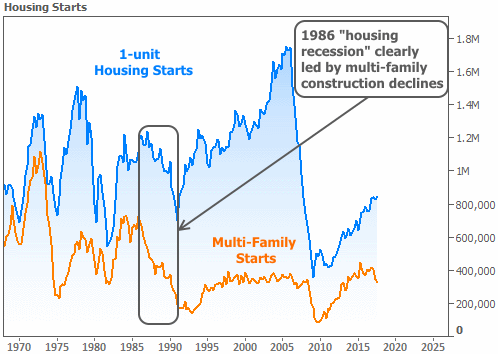 This time around, the tax changes that pertain to borrowing money pale in comparison to the mass extinction of almost all interest deductions seen in 1986.  But unlike 1986, the current tax bill would indeed limit the mortgage interest and property tax deductions for many homeowners on their primary residences.

Whether or not it would impact homeowners in such a way that cripples the housing market remains to be seen.  There's been growing consensus over the years that the MID isn't as critical to homeownership as once thought.  Homebuilders were even ready to agree before changing their tune last weekend.  But that doesn't mean capping the MID won't hurt.

Perhaps the most insidious and least-intended side effect would be to discourage owners of homes with mortgages well over $500k from moving (all existing mortgages as of November 2nd would be grandfathered with no deduction cap, even if after future refinances).  That would put additional pressure on a housing inventory situation that's already precarious, to say the least.

Apart from tax bill drama, there were actually a few other pieces of news this week!  Many of the stories are linked below, but a notable highlight is yet another stellar home price report, this time from S&P/Case-Shiller.  The Case-Shiller Index (20-city) has had an uncanny run of ultra-stable year-over-year appreciation.  It rose to 5.9% this month. 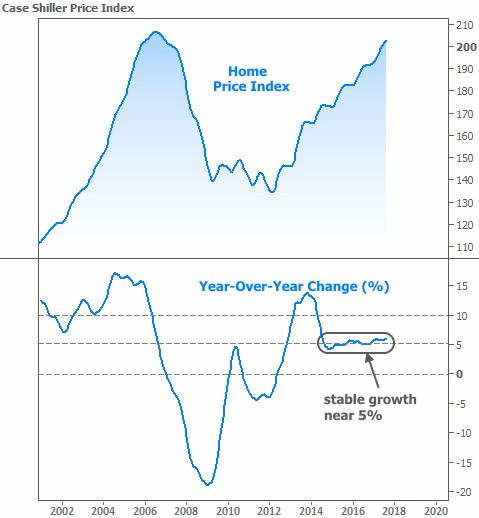 For a week with plenty of potential motivation, interest rates weren't too volatile.  Mortgage rates fell to the lowest levels in more than 2 weeks, but they did so gradually.  In the bigger picture, rates are near the middle of 2017's range and haven't moved much recently (based on 10yr Treasury yields--the best benchmark for long-term rate momentum).

But shorter-term rates are a different story.  They continue rising because they're more closely-tied to Fed rate hike expectations.  In fact, as of this week, the gap between 2 and 10yr Treasury yields was as narrow as it's been since before the Financial Crisis. 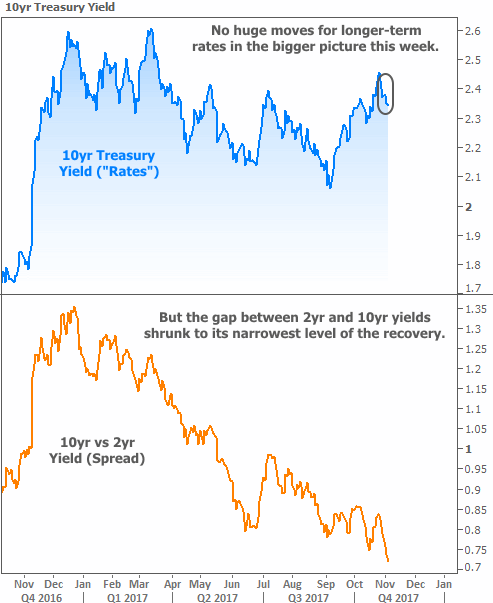 Why does that matter?  It may not matter too much just yet, but if this trend continues, economists will quickly remind us that when this spread gets too narrow, recessions often follow.  Here's a much longer-term view of the same 2yr/10yr spread with the last 3 major recessions highlighted.  In all 3 cases, the spread went below zero (i.e. 2yr rates were higher than 10yr rates) just before the recessions became official. 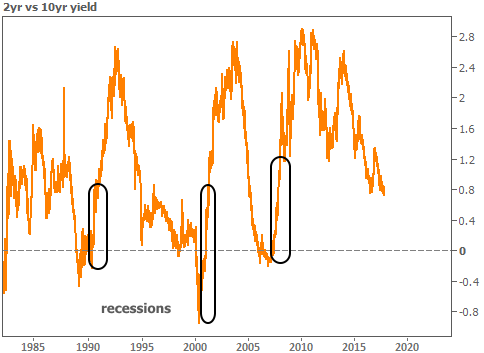