This week's news was primarily focused on escalating nuclear rhetoric between the US and North Korea. Meanwhile, mortgage rates dropped to the lowest levels since November 2016. The connection between those two developments, however, is debatable. 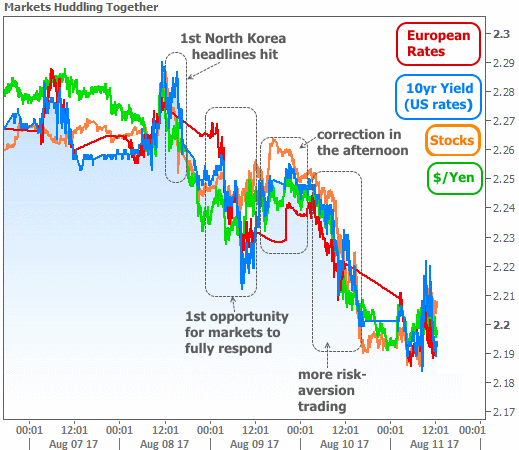 Moreover, the way these metrics are huddling together is typical of a market that is uncertain and reacting to unexpected geopolitical headlines.  In other words, it's just what you'd expect when the threat of global nuclear conflict suddenly takes center stage.

If we zoom out and focus solely on stocks and bonds, the conclusions start to change.  The following chart is scaled to the highs and lows that occurred before this week.  That allows us to see this week's movement relative to its recent range. 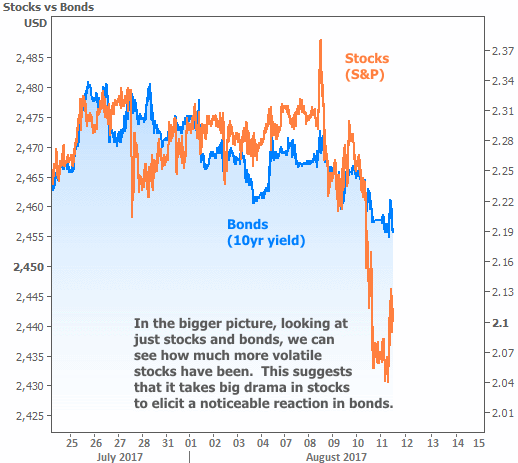 Clearly, this week was a much bigger deal for stocks whereas bonds didn't make it much lower than last week's best levels.  That begs the question: was the movement all about the nuclear headlines?  After all, we'd expect a more unified response (i.e. a bigger drop in rates) if markets were strictly reacting to geopolitics.

Indeed there were other factors in play (there always are).  By mass media accounts, it was the tech sector that resulted in stocks taking a much bigger bath than bonds.  It's true that on Thursday alone, several tech giants saw shares drop more than twice as fast as major averages.   But that could be just as much a reflection of tech's massive outperformance in 2017, combined with recent jitters.  In short, the tech sector was more vulnerable and there was more concern about potential weakness coming into the week. 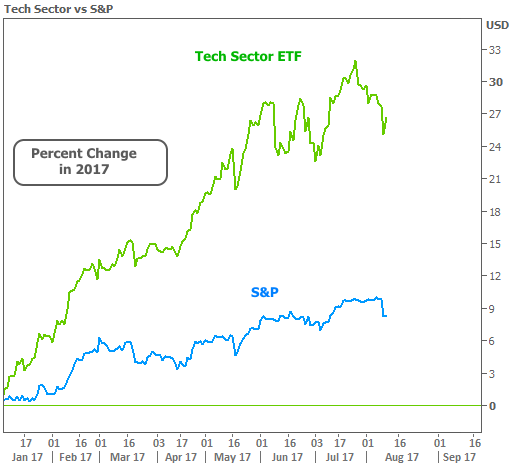 "Vulnerability and concern for potential weakness" is really the theme here.  Nuclear headlines simply served as the spark.  The tech sector is an extreme example of general investor sentiment. The higher they go, the more worried some investors are about a correction.  Because stocks have been calmly treading water near all-time highs since late July, and because rates were already close to the lowest levels of the year, stocks had much more to lose this week than rates had to gain.

Rates did make gains though.  Mortgage rates, specifically, managed to hit new lows for the year, thanks to the modest improvements throughout the week.  The broader benchmark for rate momentum--the 10yr Treasury yield--is not yet back to its best levels and there's still a fair amount of ground to cover before making it back to June's lows (just over 2.10%). 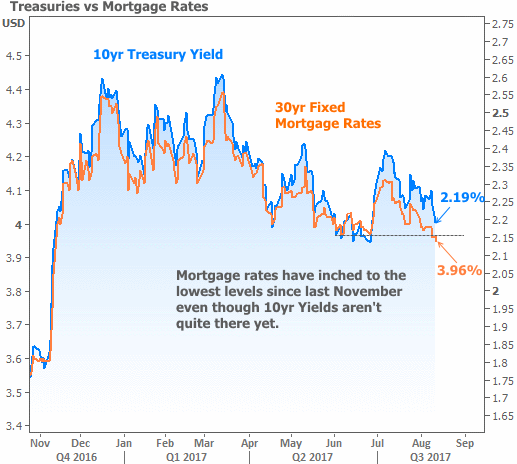 As long as 10yr yields remain above those lows, mortgage rates won't be willing to move too much lower.  Whether or not those lows are broken depends on several factors.

Naturally, if tensions were to escalate to a certain point with North Korea, bonds would be obliged to soak up some of the money fleeing out of other sectors (excess demand for bonds = lower rates).  Even without such dire developments, if that elusive stock market correction takes shape, rates would also likely benefit.

One thing we can be sure of is that interest rates will always care about what the big central banks are doing.  To that end, we've increasingly seen the Fed shy away from its previous commitment to multiple rate hikes in the coming year.  The following chart helps explain why. 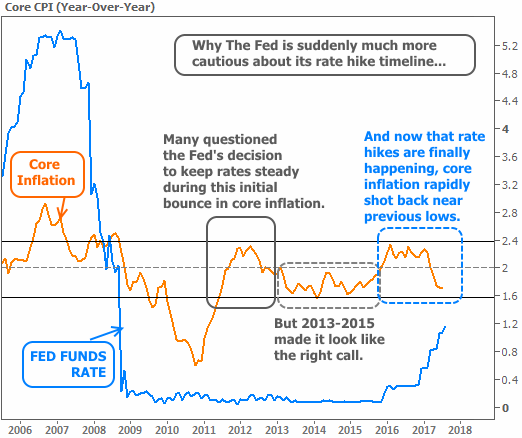 In other words, core inflation has fallen too quickly for the Fed to keep harping on an aggressive rate hike schedule.  Not all Fed members agree, but some are now saying we don't really need to hike rates until we see how inflation evolves.  Most at the Fed agree that now's the time to start tapering the Fed's bond-buying balance sheet, and have generally indicated that September would be the month to implement the plan announced in June.

Given that the European Central Bank is also rumored to open discussion on its own tapering process (not quite the same as what the Fed's doing, but both will impact rates), the next few months of monetary policy are extremely important.  Both Janet Yellen and Mario Draghi (head of the European Central Bank) will be attending the Jackson Hole symposium at the end of the month, and investors expect them to use the event to prep financial markets for any upcoming changes.