Last week's newsletter was all about the Fed Minutes, which showcased a fairly detailed strategy for reducing the size of the Fed's balance sheet. It was generally more rate-friendly than investors expected. This week's jobs report added to the positive momentum--at least for rates!

Stocks, on the other hand, don't seem to be wanting for positive momentum.  They've been moving steadily higher since November's Presidential election, slowly catching up to the massive spike in interest rates (which had already topped out by the end of 2016 as seen in the chart below).

Back in November, rates spiked faster than stocks because rates (which are driven by the bond market) had to read deeper meaning into the election results.  Not only did rates have to adjust for economic growth and inflation potential, but also for the likely changes in Fed policy--specifically to the reinvestment policy (in which, Fed bond buying helps rates stay lower than they otherwise would be).

While Fed rate hike expectations definitely have an impact on longer term rates like 10yr Treasury yields and mortgages, it wasn't until the Fed began demystifying its reinvestment plans that rates were able to make a meaningful move back toward lower levels. 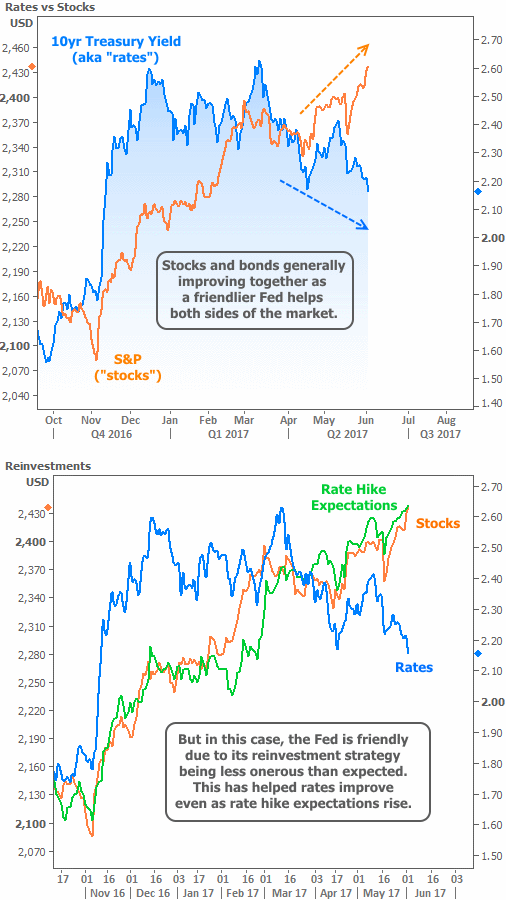 Fed policy often accounts for the biggest shifts in rate momentum, while the day-to-day events and headlines act more like fine-tuning adjustments.  This week, those smaller adjustments took the form of "month-end bond buying" on Tuesday and Wednesday (compulsory trades from money managers who have to be holding a certain mix of bonds by the end of the month).  On Thursday, there was some volatility surrounding the ADP Employment report, but it was Friday's jobs report that caused the biggest move. 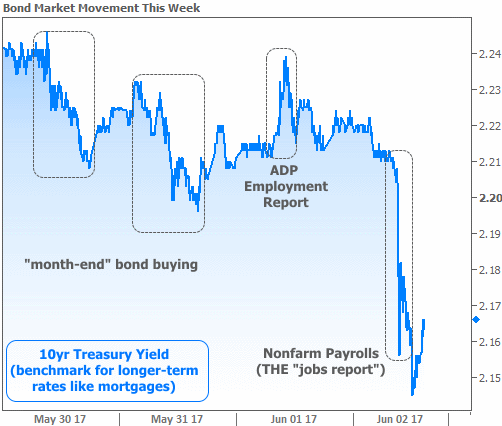 While "big" in the context of this week, Friday was still one of those "fine-tuning adjustments" in the bigger picture.  The reason it's more exciting than normal is that it brings rates to a very important line in the sand.

Following the election, US 10yr yields (the quintessential benchmark for momentum in longer-term rates like mortgages) formed a prominent "gap" between the closing levels of one day and the opening levels of the next.  This is typically only seen in the midst of major shifts in momentum.

Breaking THROUGH the gap would be a big deal as it would suggest an end to this period of negative momentum.  This week began with rates being fairly close to the gap.  From there, weaker jobs numbers provided the final fine-tuning adjustment.  In the chart above, it was as simple as getting below 2.17%.  In the chart below, we see rates' second attempt since the election to storm the proverbial castle.  The first attempt was unsuccessful.  Will things be different this time?  We'll know a lot more about that when we see how bonds trade next week. 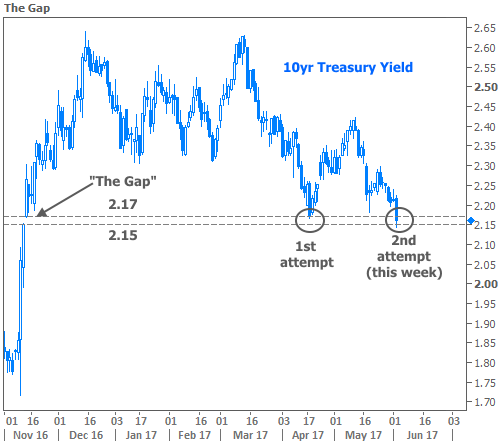 When/if this gap breaks, it could merely be the beginning of additional positive momentum.  With fiscal policy plans hitting roadblocks this spring and some softness in the economic data, traders are once again considering the risk of the economic cycle "rolling over."  This is a simple reference to economic expansions (adding jobs, positive changes in GDP) vs contractions (losing jobs, negative GDP).

The positive economic cycle in the 90's is often cited as a paragon of stability and staying power in terms of job creation.  The chart below highlights that cycle compared to the current expansion.  Long story short, this week's jobs numbers (nonfarm payrolls) did nothing to reject the notion that the current cycle remains at risk of rolling over--if not now, then soon. 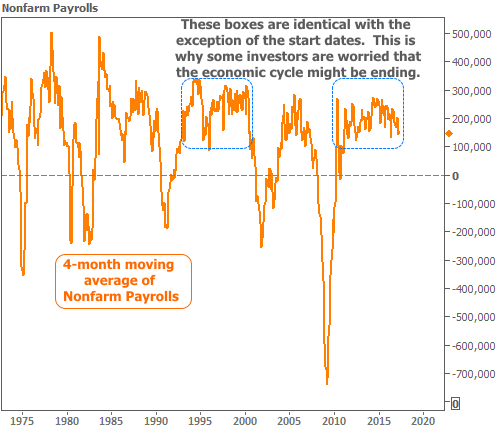 This week's housing-specific data sang a similar tune, with Pending Home Sales falling in line with 2016's averages.  This advance indicator of sales activity increasingly looks to be stalling-out since 2015. 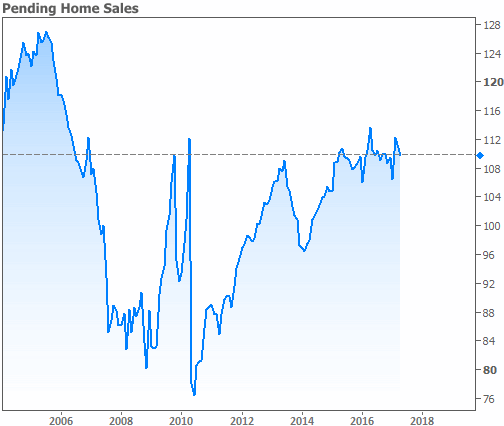 Not all the housing news was bad, however.  Home prices continued to defy the odds according to separate reports from Black Knight and Case-Shiller.  At the same time, Fannie Mae implemented an underwriting change that could help a few more prospective homebuyers qualify for loans on these ever-pricier homes by easing DTI (debt-to-income) requirements.