When it comes to interest rates, there are only a few quintessential sources of inspiration: the economy and the Fed. After entertaining a cadre of new suitors (like geopolitical risks and fiscal policy missteps), rates finally seem ready to reconnect with those familiar old flames. This week, that turned out to be a good thing.

Although rates had done a nice job of moving lower between mid-March and mid-April, they'd been trending progressively higher since then.  These trends can be seen in the following chart.  As of Friday this week, rates made their first attempt to break below the recently troublesome uptrend. 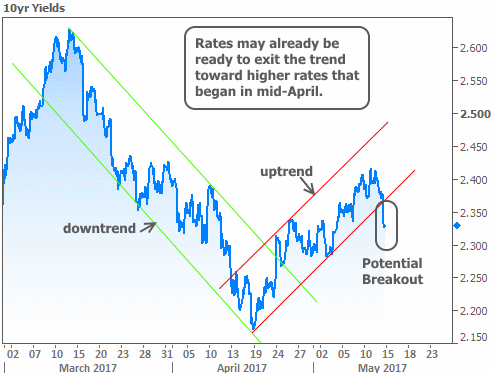 Unlike late-March and early-April, rates didn't find much benefit from various geopolitical and fiscal headlines.  In other words, threats of nuclear war with North Korea and congressional infighting didn't create this breakout.  In fact, rates were generally still moving higher for most of the week.

Part of the problem was "supply."  Like anything that can be bought or sold in financial markets, there is a certain amount of supply and demand for bonds.  When the supply of bonds rises relative to demand, bond prices fall and interest rates move higher.

While it's normal for corporate bond supply to ramp up during earnings season, if it combines with Treasury supply (especially when rates are already in the process of trending higher), it puts extra pressure on investors seeking to buy bonds.  Buyers aren't as willing to go out on limbs chasing higher prices.  Thus prices fall and rates continue higher.

That's exactly what happened to bonds during the beginning of the week. By Thursday afternoon, the biggest wave of supply was over.  Rates leveled off and investors waited for the good, old-fashioned economic data due out on Friday morning to provide some guidance.

Friday's data included Retail Sales and the Consumer Price Index.  Investors were already starting to get nervous about weakness in the Retail sector and this week's report didn't help.  Sales rose at 0.4 percent versus a median forecast of 0.6 percent.  While that's not a terrible reading, it's not moving in the right direction.

At the very least, slower sales growth fails to support an ongoing surge in stocks.  The timing was important, because it helped reinforce a ceiling over stock prices.  A recent chart makes this week look like a failed attempt to break that ceiling.  If money may soon be flowing out of the stock market, bonds would be there to soak some of it up (thus helping bond prices move higher and rates move lower). 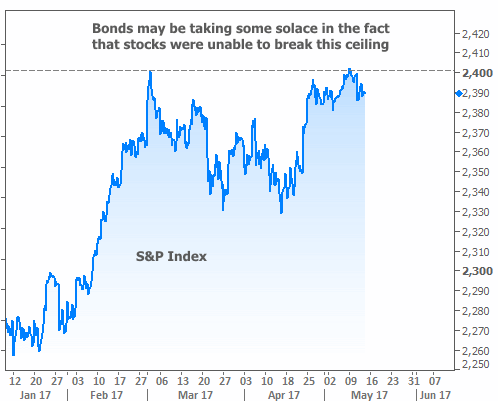 Given that much of the recent dialog from the Fed has addressed risks of overshooting on the inflation target, the backwards movement was an important gut-check this week.  This is easily seen in a chart of Fed Funds Futures (expectations for a rate hike in June) versus 10yr Treasury Yields (the benchmark for longer-term rates like mortgages). 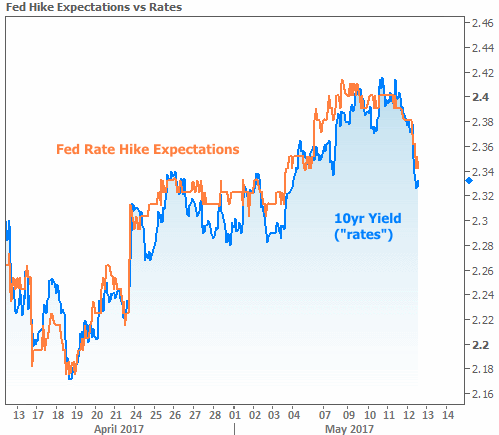 The chart above is brutally simple.  Not only have Fed hike expectations been a factor this week, but they've been constantly on the mind of bond traders since rates bottomed out in mid-April.  Incidentally, there was indeed less connection before then as geopolitics and fiscal policy had more of the spotlight.

In percentage terms, a June rate hike is still highly likely (over 80%), but as that probability shifts in the coming month, rates should continue to pay close attention.  That means that all of the incoming economic data that speaks to growth and inflation stands a better chance than it did in April to have an impact on day to day rate movements.  If the data continues to allude to contraction, rates can carve out a new trend lower.  While that's far from guaranteed, the fact that it's even a possibility is welcome news in a year where many experts predicted rampantly higher mortgage rates.

Refreshingly, our predictions for mortgage application activity to weather the storm of late 2016's rising rates continue to look good.  Whereas some big name economic teams like that of Freddie Mac predicted that origination activity would be "crushed" in 2017, even refi applications have managed to hold above their historical lower-bound.  Purchase applications have been an even better example of slow and steady progress regardless of the interest rate environment. 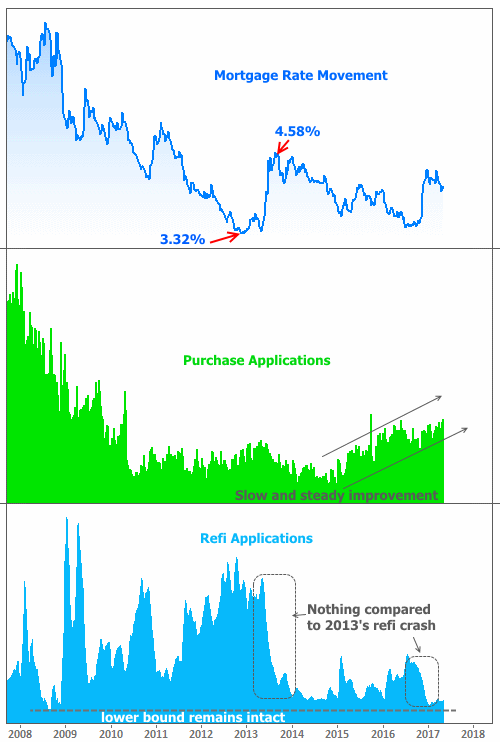