Multiple sources of inspiration continued vying for the market's attention this week with no clear winners. Stocks remained fully locked in the same indecisive pattern that emerged last week. Rates, on the other hand, may be starting to choose a side. 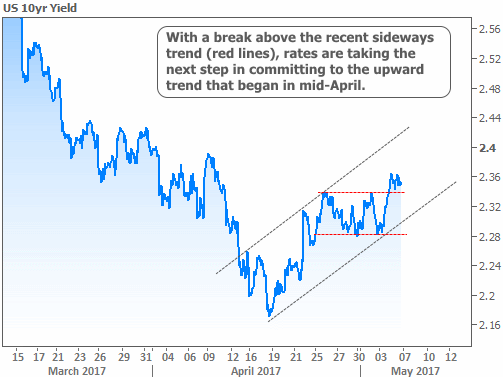 For rates, the tipping point was Wednesday's announcement from the Fed.  Normally, we'd pay the most attention to the Fed meetings that result in a change to the Fed's policy stance (such as hiking/cutting rates, or changing the amount/pace of bond buying programs).  This time around, markets were in general agreement that there would be no policy change, but the announcement was nonetheless seen as an important venue for clues about future policy changes.

With last month's jobs report being quite weak, and Q1 GDP coming in at a mere +0.7 percent, some traders were looking for the Fed to temper their recent enthusiasm.  While the Fed did acknowledge some of the recent weakness in economic data, they offered just as many counterpoints, going so far as to characterize Q1 weakness "transitory."  With that, traders who were hoping to see a gloomier Fed were forced to sell bonds, thus pushing rates higher.

As dramatic as that sounds, it wasn't enough to break rates above the sideways trend seen in the first chart (red lines).  Where did the extra push come from?  Financial media paid most attention to oil prices, the House's passage of the new healthcare bill draft, and of course, stock market volatility.  But more than any of those factors, it was European market movement that coaxed US rates higher.

The late-April push toward higher rates in the EU was a factor of the first round of the French election.  The candidate who might try to get France out of the EU (Le Pen) made it to the run-off, but so did Macron.  If Le Pen won, stocks and rates would have fallen sharply, but Polls suggested Macron would handily win the upcoming run-off, so stocks and rates rose.

Investors were still entertaining the possibility that this week's presidential debates in France could tip the balance far enough back toward Le Pen to make this weekend's run-off a closer call (which would have been bad for stocks and good for rates).  But polls remained fairly steady after the debate, with Macron maintaining a 63/37% lead.  As such, European rates continued higher still.

By Monday morning, we'll have confirmation of the French election results, and while it's not the only market mover to consider, it will likely be worth a bit of extra pressure on interest rates.  Unless another development speaks up in favor of lower rates (e.g. lousy economic data, botched fiscal reform in congress, or a geopolitical flare-up), risks remain in place that rates have entered a mild uptrend as seen in today's first chart.

In the bigger picture, rates really haven't moved that much for the average housing market stakeholder.  We're talking about an eighth of a point (at most!) between the best and worst levels of the past few weeks.  In general, rates have fared much better than most experts expected in 2017--a fact that's reflected in the recently strong housing data, as well as the ability for mortgage applications to hold their ground.

This week's most notable piece of housing-related data was CoreLogic's Home Price Index.  Reasonable rates teamed up with tight inventories to create a 7.1% year-over-year gain.  The index continues to outpace CoreLogic's own expectations, which pegged the current number at 5.2% a year ago.