Seemingly overnight, the bill to replace the Affordable Care Act is all anyone can talk about in financial markets. How did we get here and what does it mean for rates going forward?

To understand this week's market movement, we need to revisit the most recent major theme: Fed rate hikes.

At the end of February, the Fed set about to convince investors that a March rate hike was much more likely than prevailing expectations suggested.  They were tremendously successful.  In less than a week, the probability of a March rate hike rose from below 40% to over 90%.

The Fed's message was so compelling that investors not only priced-in a March hike, but also figured the Fed's rate hike outlook would accelerate.  Strong employment data the following week helped validate that assumption, and rates moved higher still.

When the Fed's rate hike outlook turned out to be relatively tame, rates moved quickly lower, but the move was short-lived.  With the Fed reaction having run its course, stocks and bonds flattened out as investors wondered where to find the next source of inspiration.  In short, markets were open to suggestion.

Like many contentious political issues, there has been plenty of "back and forth." In the eyes of investors, passage of a healthcare bill would be a symbolic victory that increases the odds of other fiscal policy goals making it through Congress.

More than anything, this is about tax reform.  Roadblocks for the healthcare bill not only delay tax reform efforts (per Trump), but they also cast doubt on the administration's ability to get the necessary buy-in from Congress.

Investors asked themselves that question all week.  Every new sound byte and headline pertaining to the healthcare bill elicited a reaction in stocks and bonds.  This was especially noticeable on Tuesday after the revelation that differing views among Republicans meant the bill wouldn't have enough votes to pass as written.  Rates dropped precipitously and stocks experienced their biggest losses since the election.

All of the above can be seen in a chart of 10yr Treasury yields--the most ubiquitous benchmark for momentum in longer-term rates like mortgages. 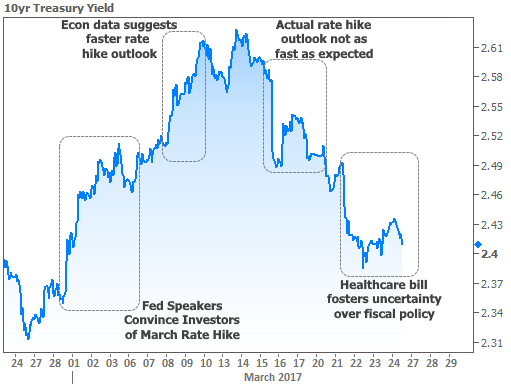 Heading into the weekend, a vote is expected at 3:30pm EDT.  If it happens, that leaves only 90 minutes of time for markets to react this week (NYSE closes at 4pm, but futures continue until 5pm).  Even though there would likely be a big move in stocks and bonds during those 90 minutes, the true market reaction would play out on Monday morning.

In housing-specific news, this week's data was mixed.  Existing Home Sales fell short of expectations, but the National Association of Realtors points out that this was due to a stifling lack of inventory.  New Home Sales beat expectations but continue lagging Existing Sales in terms of making it back to pre-crisis levels.  Both are holding just inside positive territory in terms of year-over-year change (%). 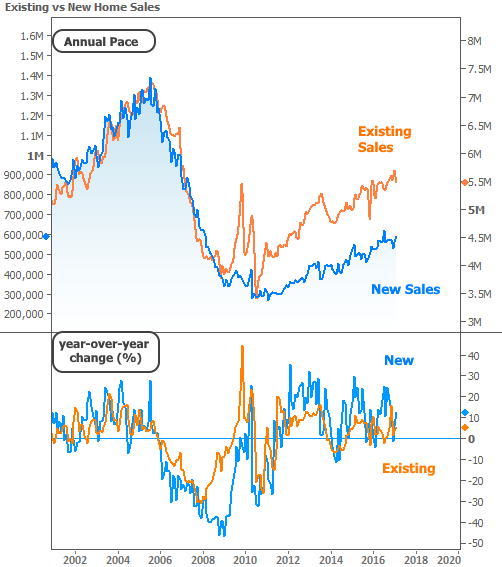 Where inventory is taking a toll on sales, the late-2016 interest rate spike took a toll on mortgage production profits according the the Mortgage Bankers Association (MBA).  Rising rates mean fewer applications and more fallout.  When the rise is abrupt, the cost of guaranteeing rate availability increases as well, further eating into profits.  Total production costs increased from $6969 in Q3 to $7562 in Q4.  Net Profit fell from $1773 to $575.