Last week's newsletter made the case that this week's Fed rate hike was "pointless" because bond markets (and mortgage rates) had already fully adjusted for it. Instead, it would be the Fed's economic projections (their forecasts for future rate hikes) that would make or break this week's rate movement. That's exactly what happened.

Bond markets are always doing their best to adjust today's rates to match future expectations, based on a number of variables.  One of the most important variables is the Fed rate hike outlook.  All other things being equal, if bond markets see the Fed hiking the Fed Funds Rate sooner or faster, other rates (like mortgages and 10yr Treasury yields) will rise.  Back in late February, the Fed embarked on a PR campaign to convince bond markets of precisely that.

A series of comments from various Fed speakers caused a rapid increase in rate hike expectations for the March meeting.  In turn, this pushed 10yr yields and mortgage rates quickly higher in the first week of March.  By that point, this week's Fed rate hike was fully accounted for.

In the 2nd week of March, the ADP Employment report crushed forecasts, showing job growth that was 50% faster than expected.  ADP is one of several advance indicators for the all-important Employment Situation (the big "jobs report").  Markets quickly adjusted for the possibility that the Employment Situation would be similarly stellar.  They concluded the Fed's rate hike outlook would accelerate (remember, that's a key ingredient for present day rates).

As such, it was no surprise to see 10yr yields and mortgage rates continue higher while March's Fed rate hike expectations held steady (after all, March expectations were essentially maxed-out).

But the Fed surprised markets by releasing a fairly tame set of economic projections.  In fact, for the end of 2017 and 2018, the median rate expectation among Fed members turned out to be exactly the same as the last set of projections (in December), and the 2019 outlook rose by a meager 0.125%.  Rates reacted decisively. 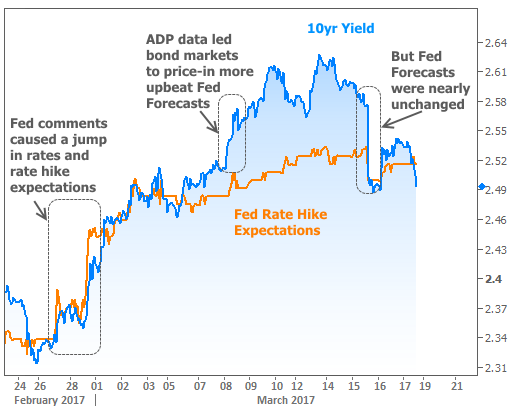 The bond market improvement translated to a significant drop in mortgage rates on Wednesday afternoon.  Lenders were certainly defensive before that, and their collective sigh of relief was evident in the new rate sheets that came out late in the day and on Thursday morning.

Some news articles from Thursday and Friday will suggest that rates are at 2017 highs.  While that was true on Wednesday morning, it's no longer the case.  Those articles are relying on weekly survey data from Freddie Mac which only captures rate movement between Monday and Wednesday morning.  Actual lender rate sheets show rates at 2-week lows.  Freddie's numbers should reflect this next Thursday, barring significant volatility early next week. 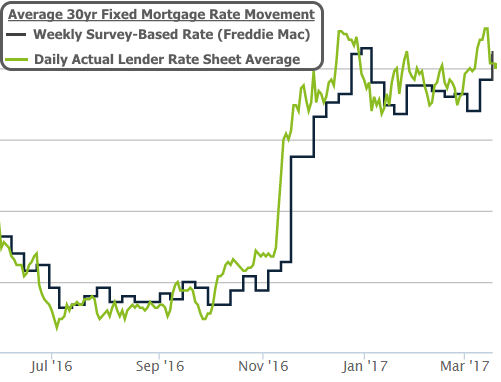 Beyond the world of rates, there was more good news for the housing market this week.  Several housing-related economic reports were strong.  The NAHB reported that homebuilder confidence reached the highest levels in more than 12 years--nearly matching the best mark from the housing boom. 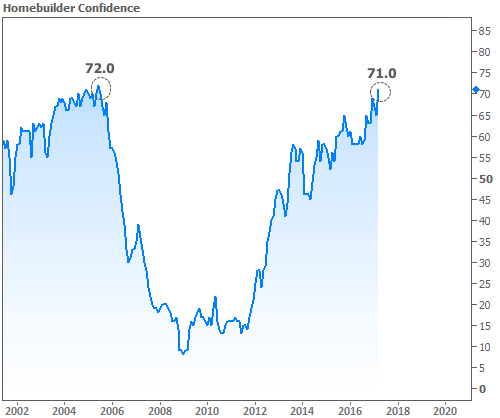 Residential construction numbers were also strong, according to The Census Bureau.  Housing Starts (the first phase of construction) and Building Permits didn't match the grandeur of the builder confidence numbers, but they maintained healthy trends nonetheless.  The following chart shows the outright level of Permits and Starts followed by the year-over-year change (which is remaining in positive territory after dipping below in 2016). 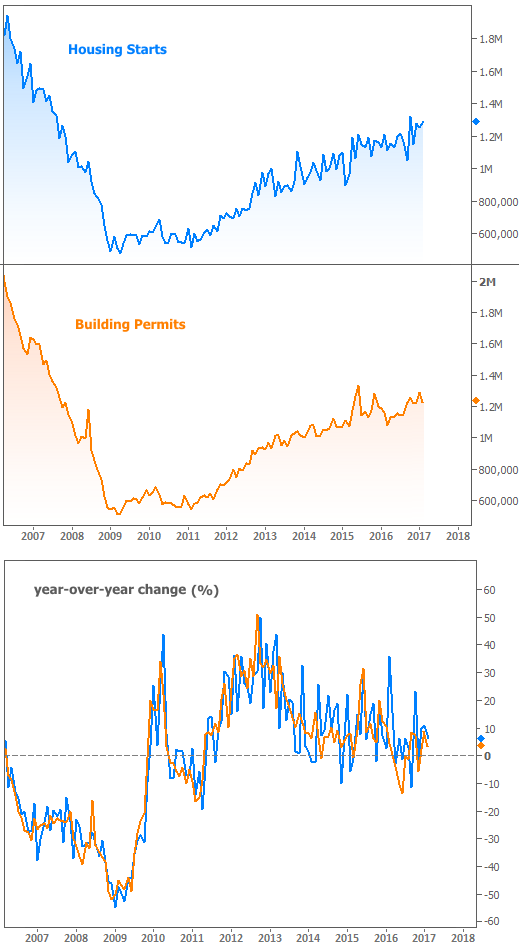 Perhaps the most important news of the week for homeowners and prospective homebuyers is a series of credit scoring changes announced by the major credit bureaus.  Civil judgments and tax liens will no longer appear on credit reports unless they were filed according to certain standards.  Most judgments currently don't meet these standards and will therefore no longer appear on credit reports.  This will make for immediate credit score improvements.