Both for the housing market and interest rates, this week stood in stark contrast to the previous week. Whereas rates had been at the lower edge of their recent range, they're now near the top. Whereas last week's housing data showed great promise, one of this week's reports may raise serious doubts.

The report in question is the National Association of Realtors (NAR) Pending Home Sales Index.  This is a bit of an advance indicator when compared to last week's "New" and "Existing" Home Sales data.  Contracts are counted in the pending sales report, meaning that it tends to lead the other reports by about a month.  In other words, the following chart is more timely than last week's.  Unfortunately, it doesn't look nearly as upbeat. 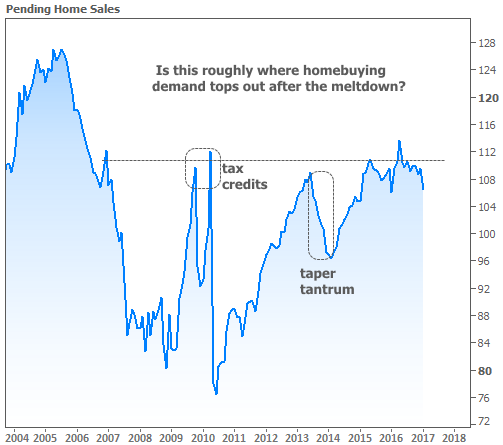 As the chart suggests, a case could be made that the Pending Homes Index tends to top out in the vicinity of 110.0 in the post-meltdown era.  If we consider that the levels of demand achieved during the housing boom were potentially unhealthy, it's only natural to ask if the recent highs are "about as high as we're going to go."  NAR doesn't quite see it that way.  Instead, demand is outstanding, they say, and it's the "significant shortage of listings" that's holding housing back.

NAR also points out that affordability is an issue.  While high demand is hurting affordability by driving prices higher, the recent mortgage rate landscape is making it harder for prospective buyers to afford the payments.  Eventually, some combination of these increasing costs will noticeably stem the tide of demand, but we're not there yet.

The Fed did their part to drive rates higher this week.  In fact, by Friday, Fed Vice Chair Stanley Fischer flat-out admitted that recent Fed speeches suggest a conscious effort to convince markets that a Fed rate hike is likely in March.  This is important because Fed rate hike expectations closely track day-to-day interest rates.

If there was one event that exemplified those efforts, it was a series of comments from NY Fed President Bill Dudley on Tuesday afternoon.  Dudley's words are worth more than most any Fed member (apart from Yellen and Fischer).  He's considered one of the "big three" when it comes to guiding policy decisions.

We don't hear from Dudley as much as several other Fed speakers, and the last time we did, he didn't speak assumptively about hiking rates.  Tuesday was a different story.  Dudley said the case for tightening monetary policy is now a lot more compelling and that a rate hike is likely in the "relatively near future."

Here's how markets reacted to that, both in terms of Treasury yields and Fed Funds Futures (financial instruments that track Fed rate hike expectations). 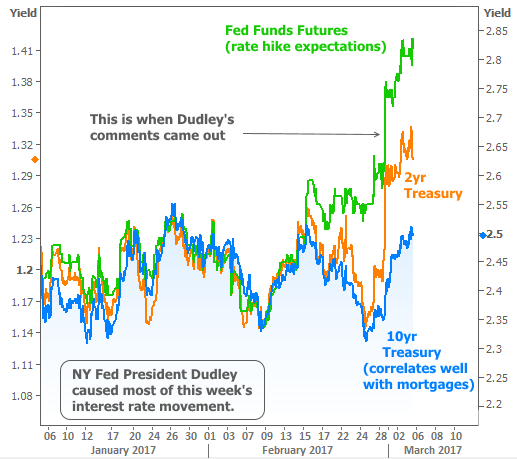 With that, the week was essentially over for rates, as they drifted moderately higher on each of the next 3 days.  So potent were Dudley's comments that bond markets didn't even react on Friday when Yellen reiterated the likelihood of a March rate hike.

So is this the real deal?  Or is the green line in the chart above akin to a long-shot sports bet?  We can observe just how real the deal is by looking at a more sober and reliable indicator of Fed rate hike potential.

The next chart shows overnight indexed swaps (OIS).  These essentially track big banks' expectations for overnight interest rates.  The difference is that, unlike Fed Funds Futures, the OIS market isn't speculative.  It's based on the rate of return that banks are actually willing to pay and receive on billions of dollars a day. When OIS starts moving higher, the "smart money" is saying a Fed rate hike is coming up soon.

This really leaves no doubt.  OIS is on the same exact trajectory as it was in the month leading up to the last 2 hikes.  It wouldn't be possible for financial markets to convey any higher probability at the moment and it would take some sort of massive, unforeseen shock for that to change.

The nice thing about such a high level of certainty is that it means there's not much about a March rate hike that is going to surprise the bond market (and thus rates).  The biggest wild card will be the updated economic projections from Fed members.  In fact, this is what caused the rate volatility after December's hike (after all, the chart above reminds us that the hike, itself, was obvious).

Whether or not that means rates will continue in the existing range remains to be seen.  They've done a good job of that so far--especially in light of surge in stocks over the past few weeks. 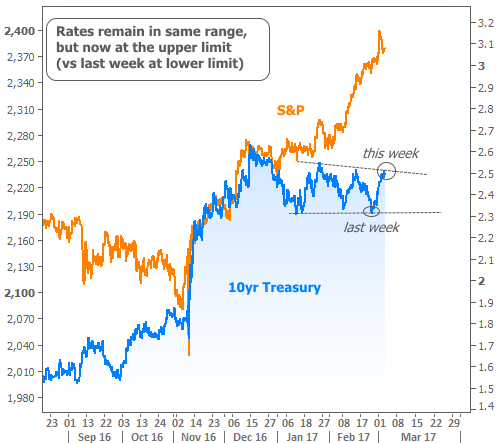 Some market participants think bond traders might be waiting to capitalize on a much-feared stock correction.  In that sense, bonds could indeed benefit from money flooding out of the stock market.  Bonds wouldn't be the exclusive beneficiary of that money, but past examples suggest it would be more than enough to keep rates under their recent ceiling.

Next week begins the Fed's "blackout period" (where they abstain from public comment on monetary policy).  That means we won't see any more Fed-induced rate volatility and can instead focus on economic data and other scheduled events.  Chief among these will be Friday's Nonfarm Payrolls data (aka "NFP," or simply, the "jobs report"), which is coming out a week later than normal due to the shorter calendar of business days in February.