Following The UK's vote to leave the EU, headlines have been awash with "all-time low rates." While that's abundantly true for benchmark rates like US Treasuries, mortgage rates aren't quite there yet--nor have they moved lower at the same pace. What's up with that?

First thing's first.  Mortgage rates are not based on the 10yr Treasury note (for space-saving purposes, I'll call them "Treasuries" or simply "10's" from here on out).  This is a common misconception that exists for a great reason: mortgage rates and 10s have moved together almost perfectly throughout history.  The relationship broke down a bit heading into the financial crisis (investors didn't really want to buy mortgages), but it became stronger than ever thanks to ongoing support from the Fed and stringent underwriting standards.

In other words, investors could rest easy knowing there would constantly be a big buyer in the market if they needed to sell (because the Fed instantly became the biggest buyer of mortgages as a part of its various stimulus efforts, and the buying amount was guaranteed ahead of time!).  Moreover, if they didn't need to sell, they knew these loans were at least being held to a higher standard than those seen before the financial crisis.

When we talk about "buying mortgages," what we're really referencing are the bonds that are created when groups of similar mortgages are packaged together and sold to investors.  These mortgage-backed-securities (MBS) are the lifeblood of mortgage rates.  When investors buy more, rates fall.

Because of the positive factors mentioned above, investors generally buy MBS at a similar pace to Treasuries.  But sometimes the relationship gets a little bit out of sync--especially during times of exceptional volatility.

As we already know, the time frame surrounding Brexit (The UK's vote to leave the European Union) has been an exceptionally volatile time for financial markets.  In general, when volatility is driving toward lower rates, Treasuries win and mortgages lag.  The past few weeks are no exception.

Taking this a step further, we can easily answer the question of why mortgage rates aren't quite at all-time lows.  It's actually very simple: the prices of MBS aren't yet back to the levels seen during the all-time low rates of late 2012 and early 2013! 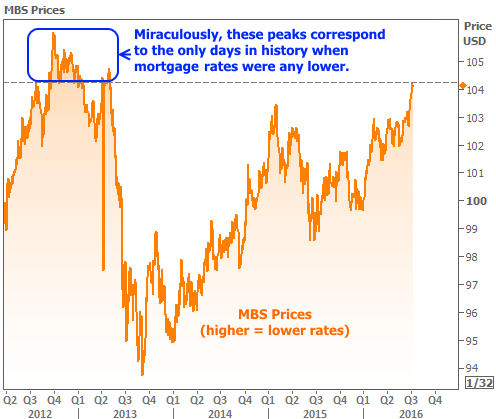 Nothing else is needed to explain the current mortgage rate environment, but just in case you need extra convincing, consider the fact that the average fees imposed by Fannie and Freddie are roughly 0.09% higher today (in terms of rate) versus late 2012.  That means rates should still be about 0.09% higher even if MBS Prices were at late 2012 levels.  Add the additional lender expenses from new regulatory requirements and today's rates are actually LOWER than the behind-the-scenes numbers suggest they should be.

None of this is of dire importance in the big picture, but it's important to know that lenders aren't simply "being greedy" by not lowering rates faster than they already have.  Even if MBS buyers manage to get prices back to late-2012 levels, lenders will still need some time to get rates as low as possible.  It's something that will happen faster for some lenders than others, depending on the structure of their business.

And regardless of business structure, all lenders have to be careful how quickly they drop rates due to fallout.  This happens when a loan in process at any particular lender is canceled.  In this environment, that would likely be due to the borrower pursuing a lower rate.  But the original lender incurs several costs on that borrower's file, and those costs end up being paid by all mortgage borrowers in the long run.  Bottom line: when fallout is minimized, lenders can offer their most aggressive rates.

This week was light on housing-specific data, with CoreLogic's Home Price Index being the only notable release.  It showed ongoing strength in OR, WA, and CO, but a potentially disconcerting deceleration in the pace of gains nationwide.