Financial market volatility is starting to increase in a noticeable way as we approach the middle of the year without a Fed rate hike in sight.  Heading into 2016, the average Fed member saw 4 rate hikes this year.  By the March meeting, the consensus had fallen to only 2 hikes due to persistently low inflation and concerns about the global economy.

The March Fed Announcement kicked off our most recent run toward lower rates.  By early April, 30yr fixed rates were as low as they'd been in nearly 3 years and very close to the all-time lows seen in 2012.

Rising oil prices combined with a slightly more austere outlook from the European Central Bank (ECB) to put a floor under global interest rates.  Last week saw rates move higher, faster than any other week in the past 6 months after ECB President Draghi confirmed he just wants to give current policy time to benefit the economy.

In other words, the ECB isn't in a rush to drop rates any further or to add even more money to its asset purchase programs.  Financial markets love free money, so when one of the world's biggest central banks puts a limit on it, markets pout.

This week offered a chance for the US Federal Reserve (Fed) to follow suit with news that would make markets even crankier.  Many viewed Wednesday's Announcement as an opportunity for the Fed to firmly telegraph a June rate hike, much like its October Announcement telegraphed a December rate hike.  After all, time is running out if they're going to hike twice in 2016 with enough time and space to allow markets to sort through an expectedly volatile response.

Instead, the Fed shied away completely from alluding to June rate hike prospects.  The statement also downgraded its view of the economy and inflation, although it dropped the verbiage expressing immediate concern about the global economy.

The takeaway for markets is that the cost of money (via the Fed Funds Rate, which is as close a measurement to the "cost of money" as we have in the US) will remain a bit lower for a bit longer.  As such, we saw rates move lower almost as quickly as they rose last week. 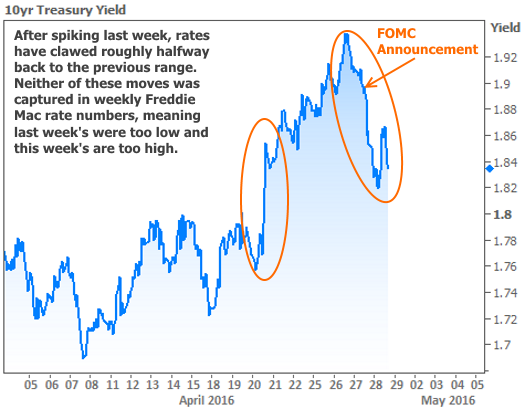 In housing-specific news and data New Home Sales fell 1.5 percent versus a median forecast calling for a 1.0 percent gain, but notably, moved back into positive territory year-over-year. 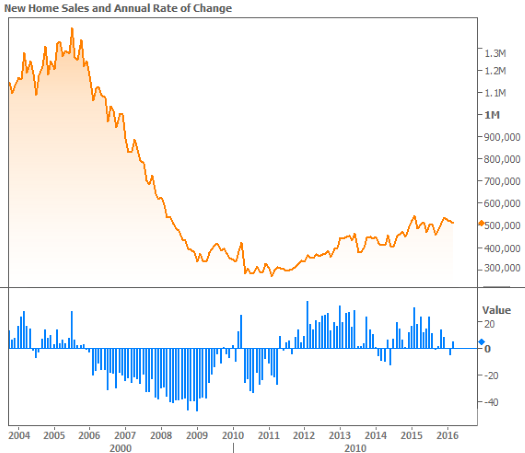 Pending Home Sales hit the highest levels in 10 months, but the NAR noted that "demand is starting to weaken in some areas, particularly in the West, where the median home price has risen an astonishing 38 percent in the past three years." 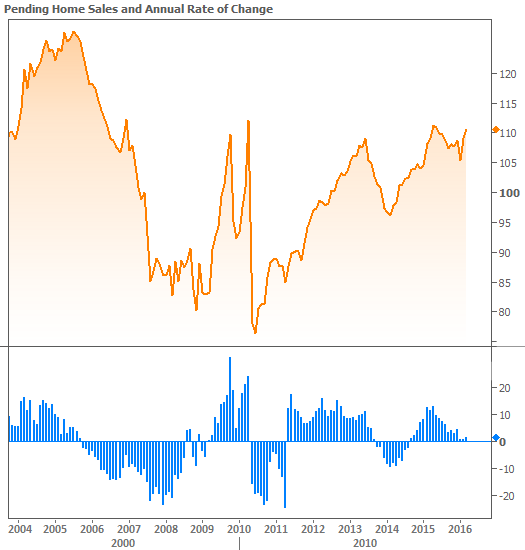 Case-Shiller Home Prices continued running in the mid 5 percent range year-over-year, but the pace of gains is easing on a monthly basis.  In a separate report, Black Knight concurred on the annual pace of home price and further pointed out that prices are nearing their 2006 peak.

Although the rising prices mean fewer homeowners have to worry about being underwater in terms of home values, some will have to consider a more literal definition, thanks to global warming.  An estimated $66-160 billion in real estate could be below sea level according to this Freddie Mac report.