There has been a lot of economic data to digest this week and plenty of movement in financial markets.  The news is decidedly mixed for the housing/mortgage market.

Some of the housing-related data was stable or strong.   Existing Home Sales led the charge, rising 5.1 percent compared to a median forecast of 3.5 percent.  This makes for an annual pace of 5.33 million homes, and marks a sharp rebound from terrible numbers in February.  The volatility was attributed mostly to inventory, which rose in March but remained 1.5 percent lower year-over-year.

In other welcome news, Ellie Mae released its Origination Insight report, showing that the mortgage industry has now fully worked through the turn-time delays associated with the implementation of the new TILA/RESPA Integrated Disclosures (TRID).  Average time to close a loan topped out at 50 days in January, but has now fallen to 41 days—the shortest since March 2015.

Several reports were equivocal, including Builder Confidence and Mortgage Applications.  One report was downright gloomy.  The Census Bureau’s New Residential Construction report is often referred to simply by its headline components: Housing Starts and Building Permits.  Both were down big in March.

Positivity and gloom aside, it’s always worthwhile to step back and look at the bigger picture when we talk about any given month constituting a “big move” in a particular housing metric.  For instance, if we put the very positive Existing Sales numbers on the same chart with the very gloomy Housing Starts, not only are both following a similar trend, but it’s downright hard to see how one month of data took each of the lines in opposite directions without the convenient captions I’ve provided for you on the chart! 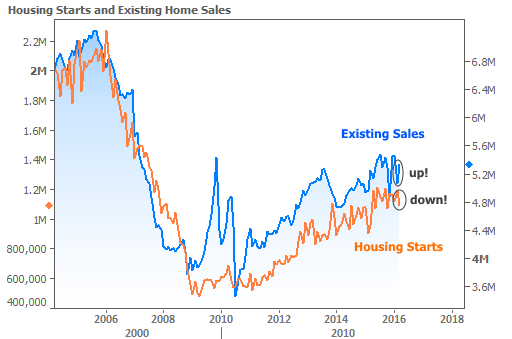 Far less equivocal this week has been the move in interest rates.  Once again, most major media outlets put out their big weekly mortgage rate articles based on Thursday’s Freddie Mac survey.   Freddie says that the average 30yr fixed rate quote only rose by 0.01%.  As usual, Freddie’s numbers are relatively accurate for the days the survey actually covers, which span Monday morning through Wednesday morning.  Thursday and Friday aren’t even measured.

That’s only a problem when there’s a big move on, say, a Wednesday afternoon.  And wouldn’t you know it!  There was a VERY big move, PRECISELY as Wednesday afternoon began.  The implication is that most people who read an article about mortgage rates today will be getting stale information.  Rates have actually spiked to the highest levels in April.  Unless they bounce back significantly next week, Freddie’s next survey will unquestionably show its biggest weekly jump since early March. 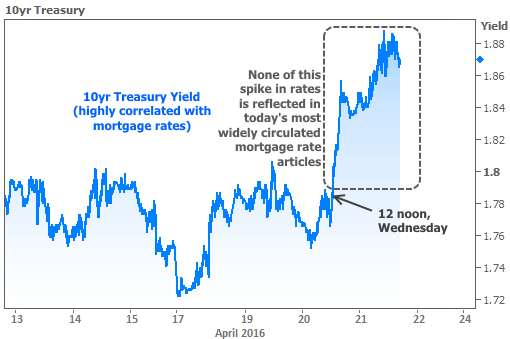 As for the source of the spike, it’s multi-faceted to be sure.  There are valid cases to be made for the bigger-picture recovery in stocks putting pressure on bonds, but I’d think of that more in terms of a “challenging backdrop” against which other factors are exerting even more influence.

Chief among these is quite simply the long term trend in global interest rates.  One of the best representatives for that global trend is the 10yr yield of the German bond market.  These are effectively “long term European rates” and they’ve been a big help to rates in the US for several years.   They’ve also been much more correlated with US rates in recent weeks than the other sources of inspiration commonly discussed in mainstream financial media. 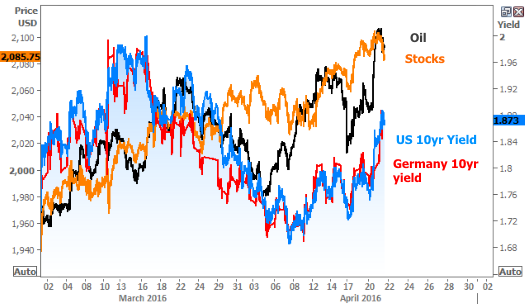 This week brought a policy announcement from the European Central Bank (ECB) in which it reinforced its preference to avoid further accommodation.  That’s a fancy way of saying Europe’s version of the Fed doesn’t want to cut rates any more or print any more money.  Markets reacted accordingly with stocks falling and rates rising.  If there is a “mainstream media” explanation that’s worth considering, it’s the big spike in oil prices that began at the same time.

Bottom line, markets never choose only one source of inspiration, but these few are certainly accounting for most of the movement.   There is a risk that the past 2 days mark a shift back into a trend toward higher mortgage rates.  At the very least, we should guard against that possibility until we can rule it out.