Ever since the Fed stepped in to save the mortgage market in 2008 by announcing that it would buy mortgage-backed-securities, the relationship between central banks and financial markets became more intertwined than it already was.

While it was the Fed’s bond buying programs that had the most forceful impact on mortgage rates over the years, Fed policy continues to play an important role in shaping the movement of the entire financial market.  In fact, financial markets (including the bond markets that drive mortgage rates) are arguably more sensitive to central bank policy now than ever before.

The reason for this is simple: the world’s biggest central banks have never been doing so much to stimulate their respective economies.  As the current business cycle matures (translation: stock markets might be topping out after 7 year rally—something they’ve done twice in a row now), investors worry about the economy’s ability to sustain further growth without central banks keeping the accommodation flowing.

Accommodation can refer to asset purchases like the Fed’s quantitative easing measures or simply to low rates.  In general, when central banks offer more accommodation, it helps stocks move higher and rates move lower—which is the opposite of their typical relationship.  We’ve seen several great examples in recent weeks and they highlight the market’s sensitivity to central bank policy.

Earlier in the month, the simple statement from European Central Bank President Mario Draghi that further rate cuts were unlikely (they’re already in negative territory, by the way!) was enough to push rates higher and stocks lower (which means they’re both improving, because lower rates result from higher bond prices).  Two weeks ago, the softer stance in the Fed Announcement pushed stocks and rates in opposite directions again.  Now this week, Fed Chair Yellen gave a speech that reiterated the Fed’s more cautious outlook and yet again, rates and stocks improved in unison. 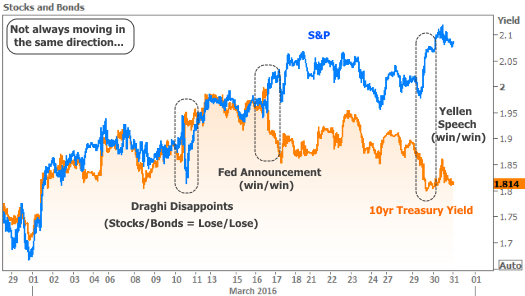 This phenomenon whereby stocks rise and rates fall is indicative of the paradox of Central Bank policy with respect to mortgage rates.  “Accommodation” is theoretically good for the economy in the long term, and a stronger economy ultimately supports higher rates.  Yet that same accommodation can take the form of lower policy rates.  In other words: lower rates can mean higher rates.  Wait, what?!

We can come to terms with the paradox by remembering that there are different kinds of rates.  The biggest difference between otherwise similar rates is their duration (i.e. 10yr Treasury notes vs 2yr Treasury notes).  Investors’ appetites for various durations are greatly informed by Fed policy.  It’s  the shorter durations that are most receptive to the Fed’s rate stance, as we can see in the following chart (we’re using 10yr Treasuries as a proxy for minute-to-minute mortgage rate momentum because mortgage rates usually only change once or twice per day.  Thus 10yr Treasuries show more variation, while remaining almost perfectly analogous to 30yr fixed mortgage rates over time). 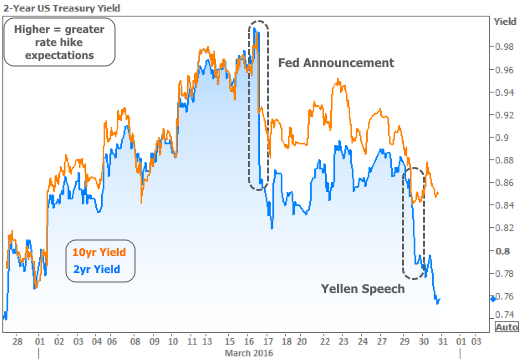 What does it all mean to you?  It may mean different things to different people, but my goal is to convey that what happens to the Fed Funds Rate won’t necessarily happen to mortgage rates.  It’s a longshot, but if the Fed is able to able to keep rates at a level that ultimately generates inflation without crippling growth, folks on the news will be talking about the Fed’s low rates while mortgage rates will be moving up.

As for now, there doesn’t seem to be too much belief in that scenario, and thus we’re seeing rates return to recent multi-week lows. Even so, some investors took Yellen’s speech as a vote of confidence in the Fed doing what it takes to create inflation/growth.  The alternative is that Yellen’s speech suggests the Fed is more concerned about the global economy than previously thought.  One of these camps will win, and rates will move accordingly.

This week’s housing-related data was mostly limited to home price reports.  Case-Shiller and Black Knight were both fairly close to each other in reporting 5.4 and 5.3 percent year-over-year growth respectively.  There are notable differences in geography though, with Case-Shiller pointing out double digit annual growth in the West and Black Knight focusing on more recent growth in Eastern states.

If housing prices aren’t likely to go lower any time soon, can we at least hope for easing credit standards to help the affordability picture?  A recent Fannie Mae survey of lender sentiment suggests that underwriting may be leveling off and unlikely to get much looser.