Last week’s headline asked if this could be the “big bounce” for rates. Unfortunately, this week’s market movement has only strengthened the case for such a bounce. While rates are still historically very low, there are a few troubling caveats.

First of all, rates have been moving quickly higher over the past 2 weeks. If you were looking at locking more than 2 weeks ago, the quote could have been as much as a quarter-point lower than it would be today. That’s a big move in relative terms.

As for the rationale behind the quick moves, that’s a problem unto itself. Since the middle of January, European bond markets have been helping US bond markets (and thus, mortgage rates) hold in lower territory, even as stocks bounced higher from their lows.

This dynamic kicked into higher gear in February as European Central Bank (ECB) officials hinted at big monetary policy accommodation in the March meeting (read: dropping money from helicopters). The ECB made good on its promise this week, but it had a paradoxical effect on markets, pushing stocks lower and bond yields higher. 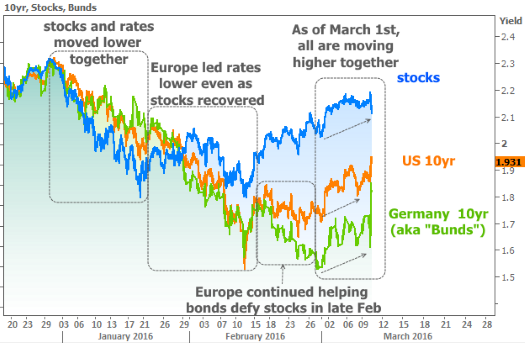 One way to reconcile this is to consider that financial markets often arrive at certain trading levels in advance of expected data, and then have no more desire to continue in the same direction once the data arrives. This is sometimes oversimplified with the phrase, “buy the rumor, sell the news.” Granted, the reaction to the ECB news is young, but so far, it’s only confirming fears about a bigger bounce in rates.

Finally, there’s the location of the bounce itself. Both in terms of 10yr Treasury yields and mortgage rates, it’s the same territory as the bounce in early 2015. Moreover, this is a level that has only been broken during the Fed’s QE3 campaign (which was the one that specifically targeted mortgage-backed-securities in September 2012). 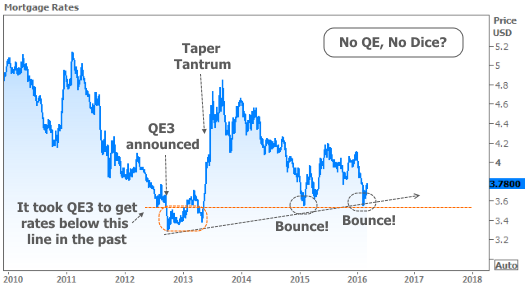 The outlook isn’t hopeless though. Markets could still be waiting to make any bigger moves until next week’s FOMC Announcement. Even in the chart above, you can see the “lower highs” in addition to the “higher lows” that I’ve pointed out. To reiterate last week’s closing thoughts, there is indeed still a long term scenario that could lead rates to all-time lows, and that scenario would definitely come with big, periodic, scary corrections. It continues to make the most sense to treat this as just such a correction until we can rule it out.

Regulators clarified current rules on the use of property evaluations instead of appraisals.

Black Knight opines that the interest rate environment in early 2016 creates a “refi revival.” In conjunction with widespread agreement on strong home price appreciation, it’s no surprise to see cash-out refinances at the highest levels in 7 years.

How long can the good times last? Not forever, according to a Fannie Mae survey that showed waning home price expectations.