Mortgage rates plunged to 8-month lows this week, defying most expectations. What’s up with that?!

Interest rates, in general, have been falling for more than 30 years. Any time anything in financial markets moves in one direction for long enough, pundits, analysts, mavens, and armchair economists can’t help but predict the end of the trend.

It goes something like this (we’ll use the term “economist” as a catch-all for the list of pundits above):

But economists have been dead wrong time and time again. This time around, it was supposed to be the Fed rate hike in December that finally confirmed the end of the 30+ year rate rally. I gave you a heads up on why you might not want to listen to them even before the Fed hiked. I also talked about the fact that rates could continue to do fairly well even after the Fed hike.

As it happens, rates have done much better than “fairly well.” As economists have learned through trial and error, any time the outlook seems like a sure thing, something else tends to come along to throw a wrench in the works.

2016 has a growing list of “something else.” At first, it was the major losses in stocks and oil. As investors sold stocks at a frantic pace, much of that money made its way into bond markets, resulting in lower rates. Just when it looked like the stock weakness and falling interest rates were leveling-off (discussed last week), another “something else” comes along—several somethings, actually. 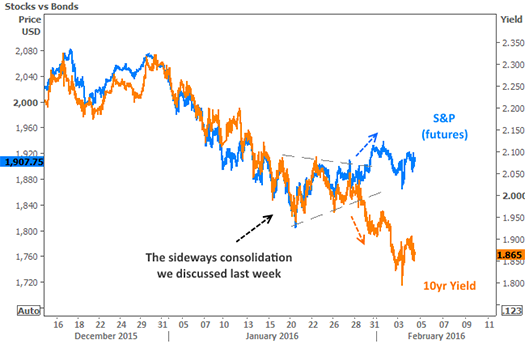 Let’s break this down a bit more, because it’s a big deal right now. Europe and Japan are the 2 biggest central banks next to the Federal Reserve. If they’re making money easier to get, it obviates some of the Fed’s urgency to raise rates at home.

You may have heard the term “currency wars.” It’s not just some tinfoil hat conspiracy theory. Major global economies want their currency to be cheap enough for their exports to remain affordable around the world. If other countries are having the same feeling, there can be more than a little bit of competition to see who can devalue their currency enough to accomplish their goals.

Looking at this from the other side of the equation, the byproduct of the Fed hiking rates is a STRONGER currency. In other words, the Fed is moving the opposite direction of the other major central banks. This is taking a toll on corporate profits of US companies and has many folks questioning whether the Fed even needs to continue hiking rates.

That’s a scary prospect. No one really knows what the implication would be because the Fed has always continued to hike rates fairly steadily after hiking from long-term lows. Scared investors buy bonds—especially when global central banks are pumping more money into the system. And bond buying = lower rates.

Construction spending numbers were tepid. Although spending did improve month-over-month, it was only by 0.1 percent—falling well short of expectations. On a brighter note, home prices continue improving, with CoreLogic seeing annual appreciation rise above 6 percent. Unsurprisingly, more equity means more cash-out refinances as well as more questions about affordability—both of which were discussed in Black Knight’s Mortgage Monitor.