Last week we discussed the theme of consolidation ahead of the holiday week, both in terms of mortgage rates and the broader housing market.   In each case, ‘consolidation’ refers to narrowing outcomes of some particular measurement.

While we often see volatility in bond markets (and thus, mortgage rates) on Thanksgiving week, this year has been an exception.  In fact, rates haven’t moved much at all in nearly 2 weeks.  Given the pace with which they HAD been moving higher at the beginning of the month, that’s something to be thankful for indeed.

When it comes to determining the source of this kind of market paralysis, “uncertainty” is high on the list of usual suspects.  We have it in spades at the moment.  Juxtaposed with the near-certainty of a December rate hike from the Fed, we have recent comments from Fed officials expressing concern about rates getting “permanently stuck” near zero around the world.   No one quite knows what to make of that, but at best, the Fed seems nervous, and that makes markets nervous.

Add geopolitical risk into the mix, like this week’s news that Turkey shot down a Russian warplane, and markets only become more nervous.

Nerves have been calmer when it comes to the US economic outlook, and the housing market, but we continue to see consolidation here too.    This week brought the release of both of the major Home Sales reports.  NAR’s Existing Home Sales data remained in positive territory year-over-year, but is definitely decelerating. 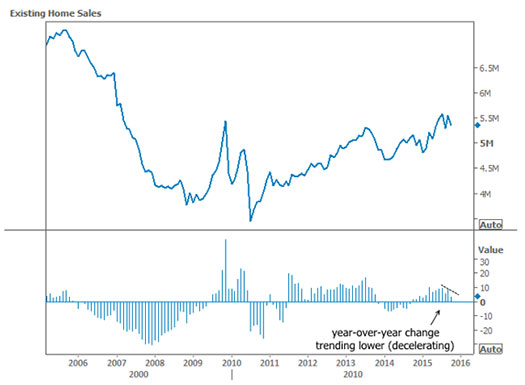 The Census Bureau’s official tally of New Home Sales was more upbeat by comparison, but there is a catch or two.  First off, the report is notorious for its wide margin of error.   Case in point: this month’s numbers were 10.7 percent better than last month, but the margin of error was 17.7 percent!  So they were probably better but possibly worse.  Moreover, we really needed a win this time in order to get the year-over-year change back above the waterline, as can be seen in the chart below.  Simply put, New Home Sales are consolidating, and perhaps even at a crossroads of sorts, at the intersection of the 2015 trend toward lower sales and the longer term trend higher. 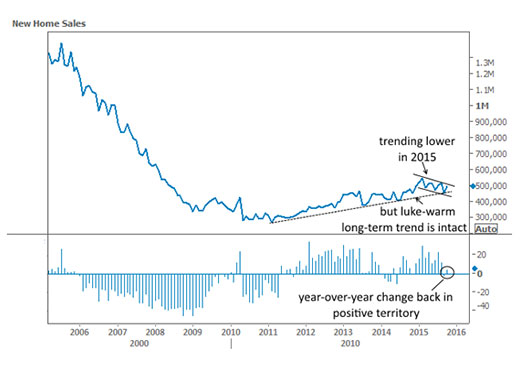 In less equivocal shape, long term, is the trend in home prices.  Both FHFA and Case-Shiller said that prices continued higher at a faster pace than last month.  In the chart below, the Case-Shiller line lags because it adjusts for inflation.  In other words, prices aren’t truly back to pre-crash levels. 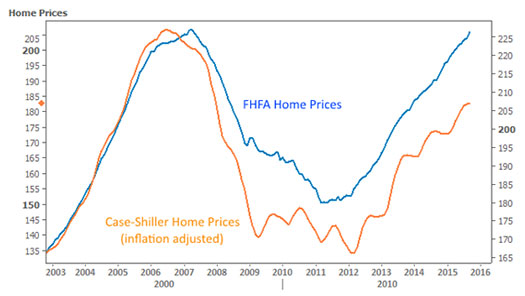 Elsewhere in the realm of housing news, Fannie Mae released a fairly upbeat forecast despite the ‘near certainty’ of a Fed rate hike.  Freddie Mac pointed out the growing divide between buyers and renters.  And FHFA increased loan limits in several high cost counties.