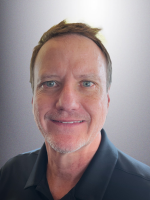 The bond market has been pointing toward higher rates since last August.  Mortgage rates were able to defy that trend at first, but finally began spiking in the new year.  February and March were two of the worst back-to-back months in years.

The higher rates went, the more likely it became that we'd see at least some sort of push back in the other direction.  Anticipation and anxiety were running high as rates hit long term peaks at the end of March.  Now 2 weeks in, April is clearly the month we were hoping it would be.  Rates haven't dropped this quickly since the pandemic began. 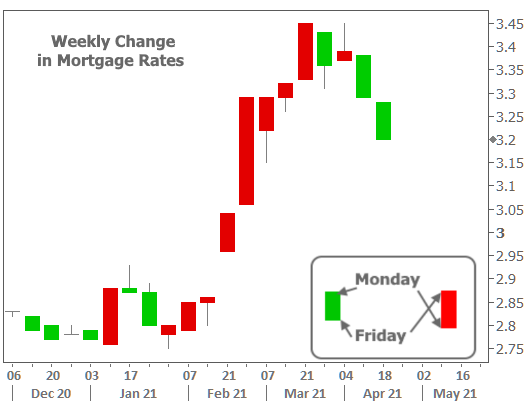 What's with the change of heart?

The bond market (which dictates rates) has a few quintessential sources of motivation.  "The economy" is at the top of that list.  Indeed, a brighter economic outlook (due to vaccines, falling case counts, stimulus, etc.) was a key ingredient in the recent rate spike.  Ironically, strong economic data appeared to have the opposite effect on rates this week.

Thursday was the best example of this paradoxical reaction.  Two key reports were released at 8:30am ET.  Weekly Jobless Claims dropped significantly, finally making it back to a range that existed before the pandemic (even if we have to go back to the financial crisis to see anything as high). 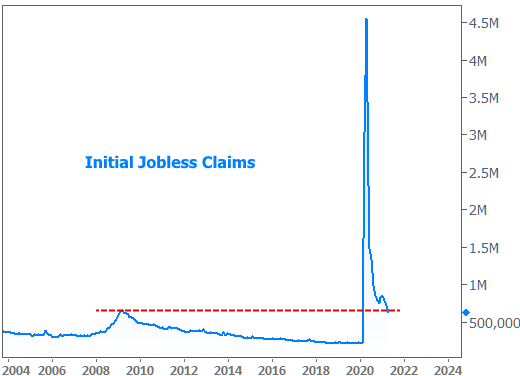 There was a more clear-cut victory in the Retail Sales report, which surged to 9.8% for the month of March.  Economists were expecting 5.9% after a 2.7% decline in February.  This was one of the three strongest reports on record. But it also coincided with the 3rd round of covid-relief stimulus checks. 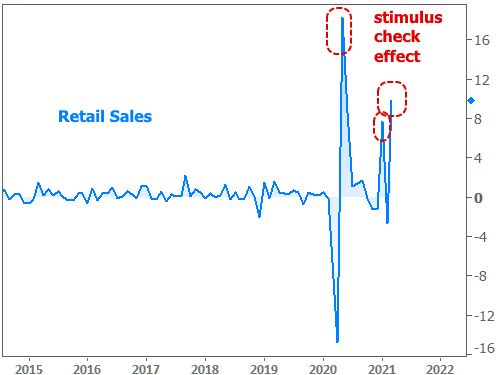 The "stimulus effect" could help to explain why the bond market was able to look past the data.  Bonds continued to improve throughout the day with 10yr Treasury yields ultimately hitting their lowest levels in more than a month. 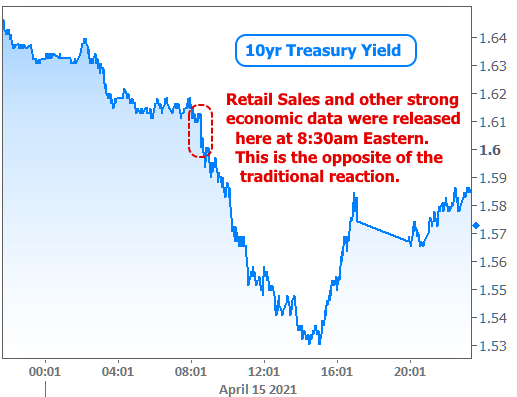 The notion of discounting the data due to stimulus payments is not enough to account for this week's strong performance.  Bonds were simply on a mission to improve, and that's generally been the case for the entire month.  It's not uncommon to see a new month push back in the other direction after strong momentum in the previous month.

Imbalanced trading positions were also susceptible to getting "squeezed."  Specifically, a large number of traders with "short" positions (i.e. bets on rates moving higher) were forced to cover those positions (by buying) as bonds improved.  More buying begets more short-covering, and pretty soon, it becomes a snowball move toward lower yields/rates.

There was some additional evidence for the "snowball" thesis as yields moved back up on Thursday afternoon (i.e. rates didn't really mean to fall quite that much).  By Friday, most of the improvement was erased, but not enough to derail the friendly trend seen so far in April. 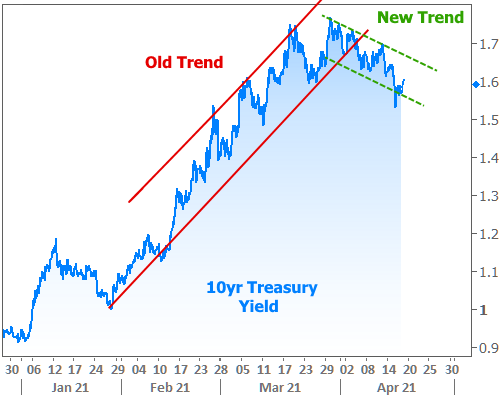 How much longer can these good times last? It's the market! One can never be sure.

If things go well, seasonal patterns suggest a yield bottom in June/July/August. That's happened in 6 out of the past 10 years.  It's impossible to know how much rates could fall, but there's definitely more resistance in that direction.  Bigger improvement in rates would be reserved for more dire economic scenarios--the kind we frankly hope not to see, no matter how much we like low rates.

If things go poorly, rates may not go much lower before beginning a steady grind toward higher highs in the coming months.  How high depends on several factors, but in previous newsletters, we've highlighted a precedent that suggests 2.4% in 10yr Treasury yields--roughly 0.80% higher than current levels.  Mortgage rates tend to move at a similar pace, especially now that the post-pandemic disconnect has been resolved. 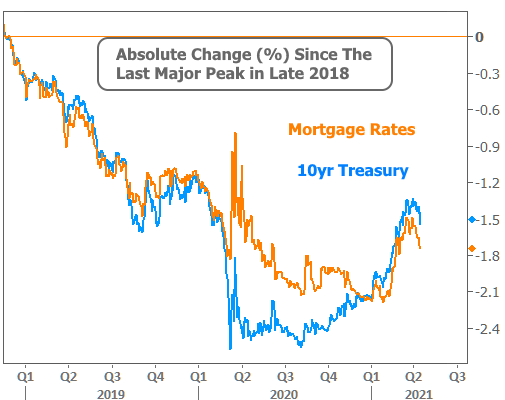 Selected charts from the week's other economic reports:

The Consumer Price Index (CPI) is one of the key inflation reports.  The Fed will continue buying bonds and keeping short-term rates low until this number (and others like it) are closer to 2.5% on a sustained basis.  This week's release clearly says "we're not there yet." 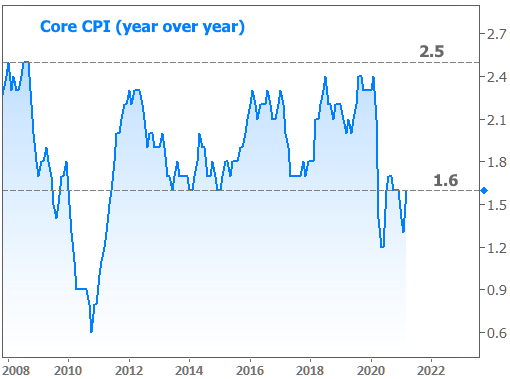 Housing Starts measure the number of new home construction projects that have reached the ground-breaking phase.  This week's report (for the month of March) was the best since before the financial crisis. 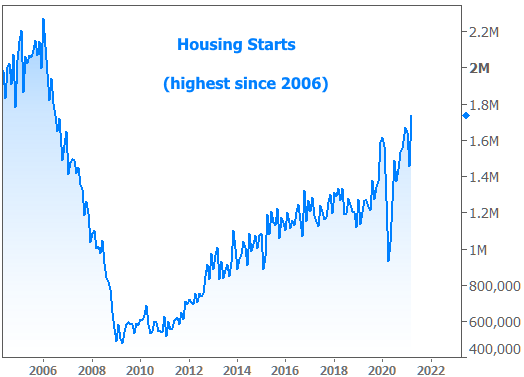 With the construction numbers in mind, it's no surprise to see builder confidence remaining near all-time highs. 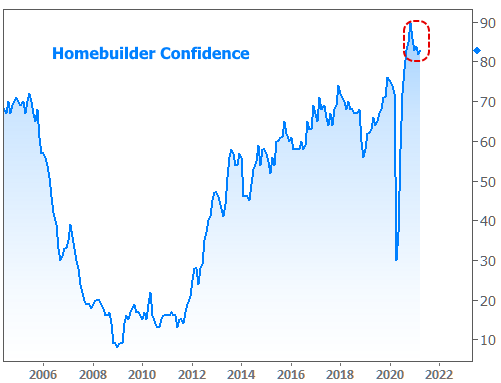