Last week, we talked about the unintended consequences of a strong economy--namely, that better economic data tends to push rates higher. This week, it was more of the same.  In addition to economic data that generally argued for higher rates, markets also had to deal with updates from central bankers as well as a big glut of bond issuance.

Why do we care what central bankers say and what does "bond issuance" mean?

I'll start with central bankers--the people who set policies intended to maintain balance in the financial system.  Many view them as having some sort of agenda, but their only goal is to smooth things out.  They're not perfect, however, so when they make mistakes, critics call them out on it, thus fueling the perception of 'agenda.'

One of the most important central bank policies at the moment is the ongoing bond buying on the part of the European Central Bank (ECB)--something they've already said will be winding down next year. Given the trade-related drama and a few geopolitical concerns that have come up since the last ECB meeting, some investors thought the ECB might be feeling more cautious.  But the central bank didn't express much concern for unexpected headwinds, nor did they suggest delaying their plans to wind down bond purchases.

That was strike two for rates this week.

You said strike two... What was strike one?

Strike one had to do with that big glut of bond issuance.  That may sound esoteric, but it's pretty simple.  Governments and corporations issue debt (aka "borrow money") to pay for "stuff."  Even when corporations have cash to pay for stuff, it can still make sense to finance it.

When big entities borrow big money, they sell big bonds to investors.  Bonds are essentially loans and investors are essentially lenders.  The more bonds that hit the market, the lower prices must be in order to capture investor attention.  And a lower price on a bond means a higher rate of return.  In other words, more bonds for sale = higher rates.

This week not only brought a full slate of bond issuance from the US Treasury, but also an uncommonly large supply of bonds from corporations.  The corporate bonds compete for investor attention, thus putting upward pressure on rates in general.

Was there a strike three?

This is going to be a longer answer, isn't it?

I'll try to keep it as simple as possible.  The ongoing phenomenon goes back to that notion of a stronger economy doing all sorts of things to push interest rates higher.

Last week's wage growth raised the risk that this week's inflation data would be stronger.  In fact, inflation came in lower than expected.  This actually provided a nice temporary improvement for rates on Thursday.  But by remaining over 2% at the core level (a less volatile and more widely-followed metric) the inflation numbers still fit a narrative that is bad for rates overall.  Core inflation over 2% makes it a no-brainer for the Fed to continue hiking rates. 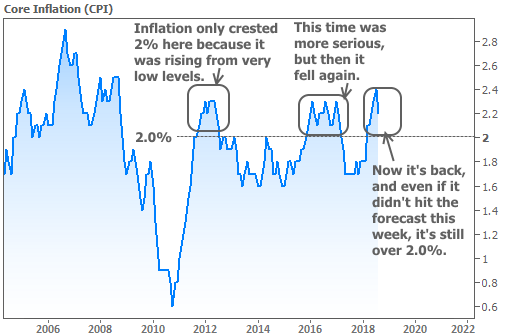 Some of the economic data (like consumer sentiment), far exceeded forecasts while other data (like Retail Sales) came up a bit short.  Forecasts aside, both sets of data suggest August was just another month with the overall economy firing on all cylinders. 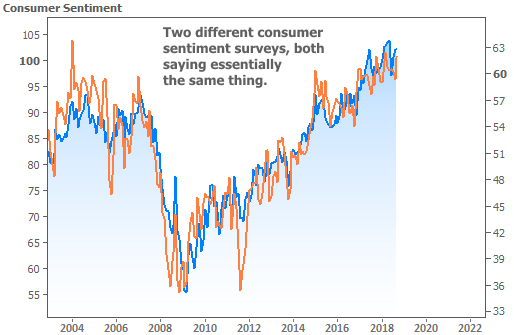 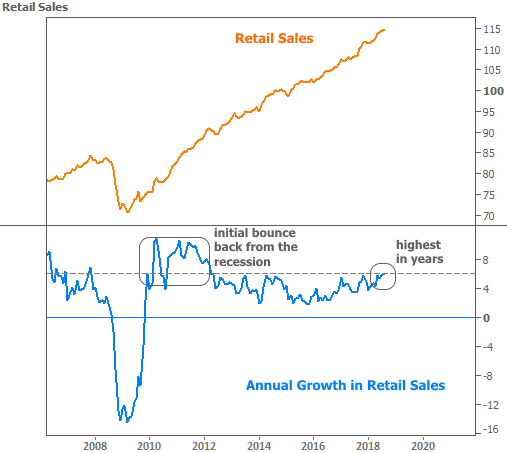 So, strong economy in August = higher rates in Sept? 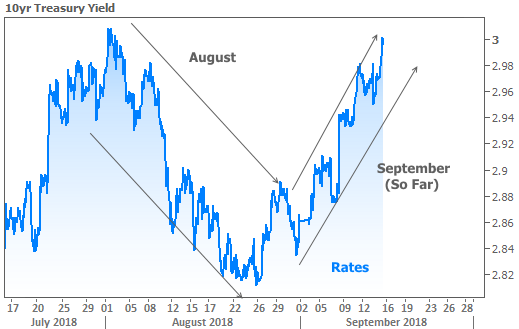 But it's not just August, and it's not just the economy.  Central bank tightening (raising rates/buying fewer bonds) and increased government borrowing are simultaneously putting pervasive, logical, upward pressure on rates.  And they have been for several years now.

By 2016, the economy had long since been healing from the Great Recession, even if the pace was a bit slower than expected.  When Trump was elected, investors figured the new administration would push for inflationary policies (tax reform being chief among these).  Those inflationary policies also stood the chance to promote even stronger economic growth.  As we just discussed, all that stuff is bad for rates, and that's a key reason longer-term rates rose more quickly just after the election.

Early 2017 brought doubts about the administration's ability to forward its agenda.  Longer-term rates recovered while shorter-term rates kept moving slightly higher due to their stronger connection with the Fed Funds Rate (the Fed made it clear that they would gradually be hiking).  September 2017 brought the tax bill back into focus as a strong probability.  Rates reacted accordingly.

Shorter-term rates shot up most readily because the administration said it would borrow more short-term debt to pay for any revenue shortfall from the tax bill (more supply = higher rates).  Longer-term rates rose too, but maintained some skepticism about the long-term effects of the administration's policies as well as global economic stability.  This helped 10yr yields stay in a holding pattern--for the most part--in 2018, even as 2yr yields continue higher. 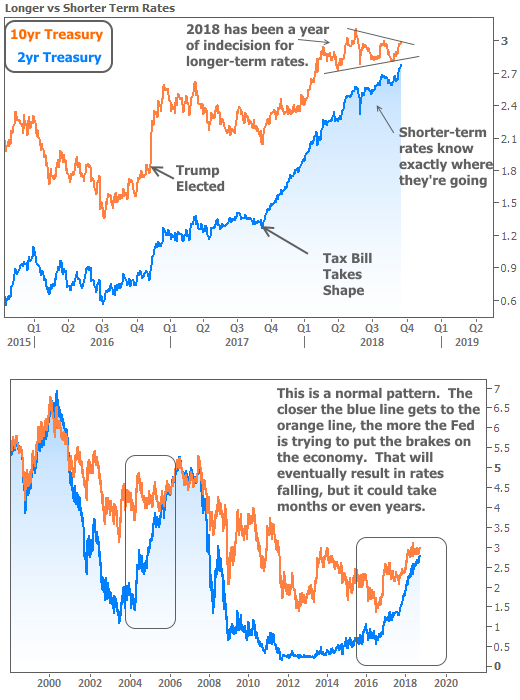 Weeks like this force longer-term rates to make slight adjustments to their holding pattern.  To whatever extent economic data can continue improving, those adjustments could continue pushing rates even higher.  Eventually though--and by design--rising short-term rates will increasingly cool off economic growth prospects.  The economic cycle will shift--either gradually or due to an unforeseen crash--and rates will enter a new downtrend.  Expert opinion varies on how long we'll have to wait for that shift.  September 2018 is probably out though!