The conforming loan limit is set by the Federal Housing Finance Agency (FHFA). Mortgages under that amount generally have the lowest effective rates, and in some cases are easier to qualify for.

With prices appreciating rapidly in the past year, a big increase in the loan limit would be big news.  Prospective buyers would be able to widen their price range in many cases and homeowners whose loans exceed the previous loan limit might be able to refinance to  a lower rate.

It shouldn't come as much of a surprise, then, that word has quickly spread about the earlier than normal increase of the conforming loan limit from $548,250 to $625,000.

There's just one problem: nothing has changed yet!  The conforming loan limit is still $548,250 and it will continue to be $548,250 until November 30th at the very earliest.

So why have people been talking about $625k?

It all began with one major lender publishing an announcement that they would accept loan amounts up to $625k as "high balance" (HB) conforming.  HB loans are already a thing for counties where home prices are much higher than the national average.  This announcement was significant because it extended HB eligibility to ALL counties (i.e. even the ones where the maximum amount is still the national minimum of $548,250).

A few days later, a few more lenders followed suit with similar announcements.  People talked.  Apparently it's easier to say "you see loan limits went up to 625k?" than it is to say "did you hear that a certain lender is currently offering HB conforming pricing to non-HB counties?"  As such, it didn't take long before the industry was abuzz with questions and comments about "the new loan limit."

Again, there is no new loan limit.  This is just an innovative strategy on the part of a few mortgage lenders designed to offer their clients more flexibility and/or to get a leg up on their competition.  That's why they're doing it, but why are they ABLE to do it?  After all, a conforming loan that doesn't conform to the existing guidelines isn't worth as much to mortgage lenders.

The answer is actually surprisingly simple.  These lenders know when the new loan limit will be announced, and they know that it will almost certainly be higher than $625k.  Here's why:

Conforming loan limits are actually updated at the same time every year, immediately following the November release of FHFA's House Price Index (HPI).  Specifically, the FHFA uses what they call the "expanded data HPI."  Determining new loan limits is as simple as looking at the expanded HPI for Q3 2021 and comparing it to Q3 2020.

Q3's HPI number is scheduled to be released on November 30th.  Even if Q3 shows no improvement, prices have risen enough in the other 3 quarters to push the new loan limit over $618k.  But those are quarterly numbers, and FHFA actually releases monthly numbers that closely mirror the quarterly data.  Incidentally, the first month of Q3 was released this week, and it showed a gain of 1.4%--enough for the loan limit calculation to spit out $627,600 without any additional price appreciation in August or September.

In other words, and to make a very long story very short, $625k reflects an extremely safe, and highly educated guess on the part of only a few mortgage companies about where the new conforming loan limit will land at the end of November.

After a volatile week spent moving significantly higher in rate, the current week began with more of the same.  That said, volatility was far more contained and by Wednesday, bond yields began to fall modestly.  As of Friday afternoon, 10yr Treasury yields (a loose indicator for mortgage rate momentum) were at the week's lowest levels.  Unfortunately, those levels were still higher than last week's highs. 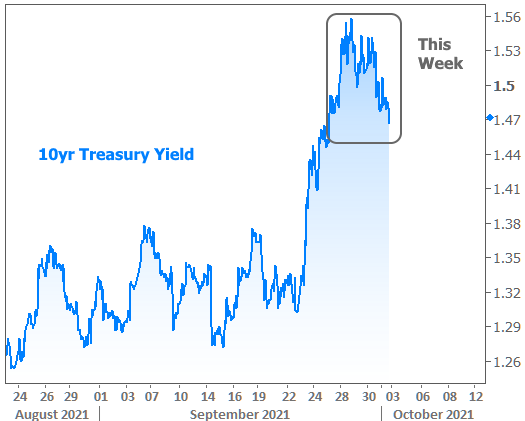