Mortgage loans ultimately "turn into" bonds and those bonds have a certain value to investors.  When those values change, so do the rates offered by mortgage lenders. This is basically a hard and fast rule. But it's completely out the window right now. And that's a good thing this week.

It's a good thing because bonds had a pretty bad week.  10yr Treasury yields--the most popular bond market benchmark--rose by more than 0.15%, making this the worst week since early August.

In general, weaker economic data is good for rates.  As such, it was no small surprise to see 10yr yields surging higher after a much weaker jobs report on Friday.  In fact, it would be almost impossible to explain if not for this week's focus on fiscal stimulus prospects.

As politicians seemingly get closer to passing another covid relief bill, bond traders are getting nervous.  Bonds/rates do not like stimulus because bonds (US Treasuries, specifically) are used to pay for it.  That creates a higher supply of bonds which, in turn, pushes bond prices lower.  And as bond prices fall, yields (aka "rates") move higher.

So what did the jobs report have to do with stimulus prospects?  In short, it was bad enough that markets assumed it would further motivate politicians to strike a deal.

The evening news may tout a drop in the unemployment rate, but that's not the best indicator for the health of the labor market.  In addition to being based on a much smaller and more subjective sample, the unemployment rate doesn't account for workers who've given up the job search.  They're simply not considered to be participating in the labor force after 4 weeks.

That number is measured too--shockingly enough--by the Labor Force Participation Rate (LFPR).  Savvy talking heads will often point out LFPR any time they discuss a change in the unemployment rate.  In Friday's case, LFPR was down 0.2%.  That means true unemployment actually held steady with last month's levels. 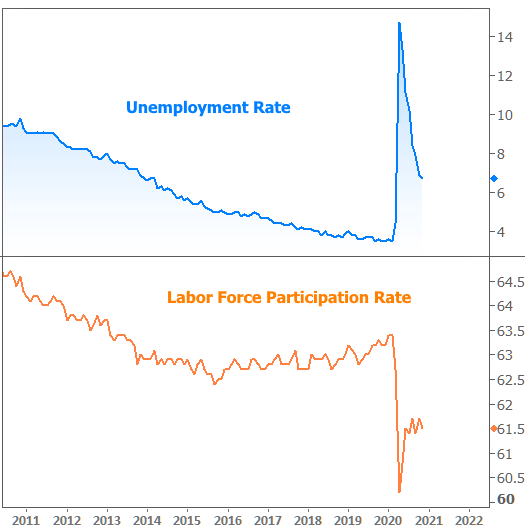 The lackluster data is even easier to understand when we look at the much more reliable and objective nonfarm payrolls (fancy words for "job count").  Before the pandemic, the economy was adding 180-260k jobs per month.  As such, Friday's result of 245k suggests job growth is leveling off after months of historically strong numbers.

It's not that 245k is a low number for this report.  Rather, it's the fact that there are still roughly 10 million jobs missing from the pre-covid economy, and 245k/month isn't going to restore those very quickly. 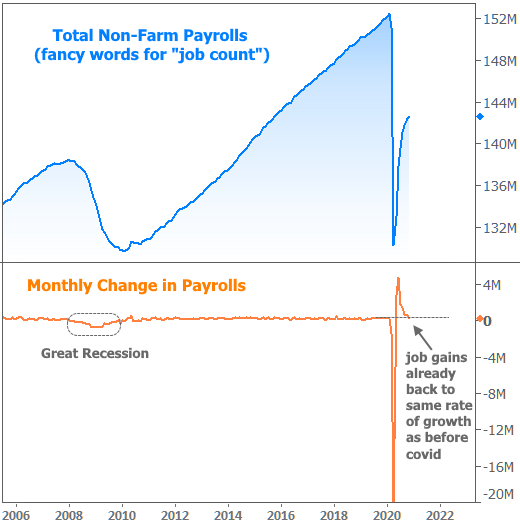 The bond market reaction lined up perfectly with the release of the data.  The only other similar spike happened on Monday morning following the initial announcement of the bipartisan stimulus bill that serves as the focus of the week's news cycle. 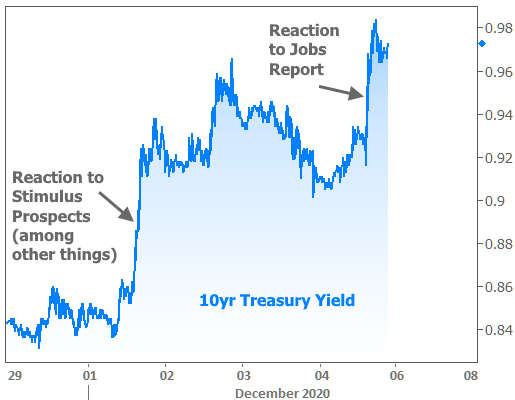 At any other time in history, these Treasury yield spikes would cause similar spikes in mortgage rates, but again, those nearly unbreakable rules are all but shattered at the moment.

In a word: capacity.  Mortgage rates have been increasingly beholden to mortgage lenders' ability to handle the new business.  Lenders hit max capacity months ago.  That left little incentive to offer lower rates (which would result in less money per loan and a whole host of problems associated with taking too long to close loans).

The upside to this logical sort of foot-dragging is that mortgage rates are still so much higher than they could be that lenders really don't have to panic too much when the bond market has a bad day.  In fact, we've seen mortgage rates continue to move lower even as Treasury yields move above their highs from early June. 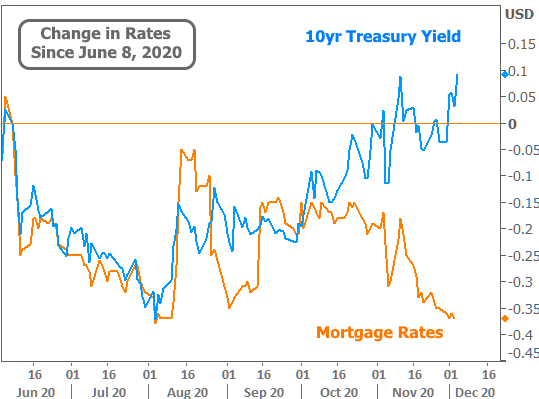 Such a phenomenon is only made possible when there's a very wide margin between actual mortgage rates and those implied by the bond market.  The following chart shows just how wide that margin has become post-covid.  Notably, it's moving even wider--not because lenders are raising rates, but because demand for mortgage bonds has been MUCH stronger than demand for US Treasuries.  In other words, the blue line goes higher for one of two reasons (sometimes both): higher mortgage rates or stronger demand for mortgage-backed bonds. 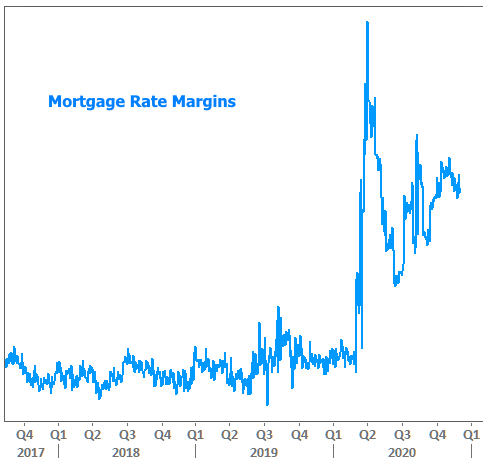 The effect on refinance demand has been obvious, but purchase applications are gaining more and more market share. 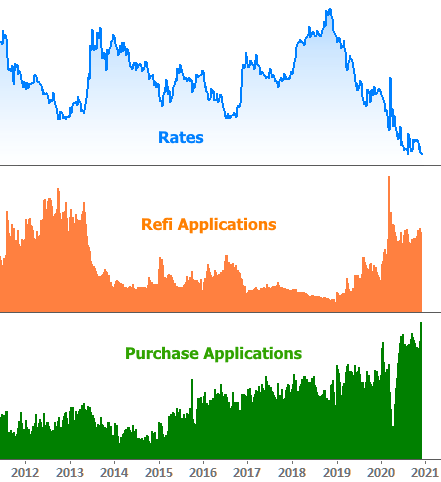 There were some headlines earlier this week indicating a slowdown in home sales, however.  Those were in reference to the National Association of Realtors Pending Home Sales report.  While those numbers did indeed decline for the 2nd straight month, here's what that decline looks like in the bigger picture (spoiler alert: without the last 2 months, this week's report would have been a record high). 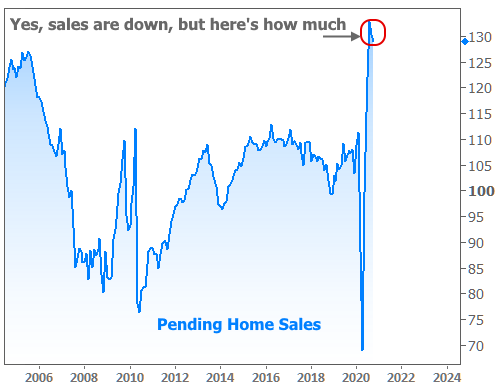 One last point of order because questions continue coming in: yes... it is too late to avoid the 0.5 point refinance fee on conventional loans.  This was the case for most lenders well over a month ago because the Dec 1 cutoff date was for lenders to deliver the loans to the housing agencies, and delivery typically happens 2 or more weeks after closing.