There was an unusual mix of developments affecting housing and mortgage markets this week. Housing finance reform was in the news, but not in the usual ways. Rates shot higher, but not for the usual reasons. And an industry report continues pointing toward a seller's market, but one of the usual side effects is still nowhere to be found.

Ask almost anyone--especially the National Association of Realtors (NAR)--about the current state of the housing market and the topic of "tight inventories" is bound to come up.  The NAR has used the words "crisis" and "emergency" to refer to inventory conditions, which they cite as the primary factor holding back stronger home sales.

Tight inventories tend to drive prices higher, resulting in more homeowners considering selling.  There's no disagreement in Fannie Mae's monthly National Housing Survey, which now points to the strongest seller's market since its inception in 2010.  What's unusual is that the survey has arguably shown a seller's market since March 2017, but inventories have yet to respond.  Perhaps with the uptick seen in this month's data, it's only a matter of time? 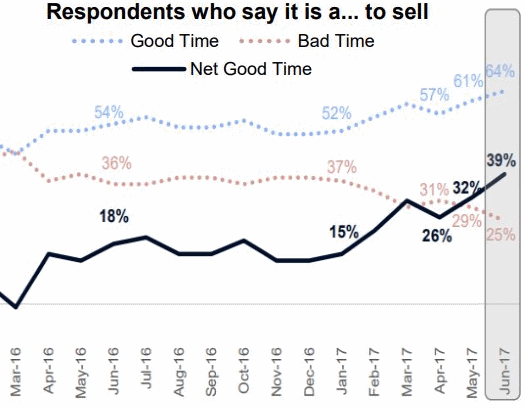 Adding to the list of things unlikely to help the sales environment in the short term is housing finance reform.  This has been a hotter topic in general in recent months and it came up in two distinctly different ways this week.  The first is more of a refreshing anecdote than anything.  CoreLogic points out that lawmakers are increasingly discussing appraisal issues as part of a holistic housing reform approach.

The second is more of a head-scratcher.  Fed Governor Jerome Powell pontificated on the urgency of housing finance reform.  This is not typically the Fed's territory, and it shows in some of Powell's conclusions--several of which contradict each other.  On one hand, he said the current system is unsustainable because government-backed mortgages pose systemic risk and create the potential for taxpayer losses.

On the other hand, he points out that Fannie and Freddie have more than repaid their bailout funds.  While Powell did mention the conservatorship (which dictates all Fannie/Freddie profits be swept to Treasury), he didn't comment on what housing finance sustainability might look like if those profits were instead being used to insulate the agencies against future losses (rather than serve as a major source of revenue for the government).

Instead, he said that reforms to date have created standards that could be too rigid for consumers (especially those with lower credit scores), but that haven't addressed underlying risks to taxpayers.  This was the most unusual juxtaposition of ideas in the entire speech.  Easier underwriting guidelines would imply MORE (not less) risk to taxpayers.  Powell's advocacy for a return of private capital would make loans even MORE expensive (especially for those with lower credit scores)!

I'm not saying Powell's intentions are wrong or off-base.  In fact, most of his conclusions are sound, but several are simply incongruous.  The point is that housing finance reform has been and will continue to be a complicated process, fraught with trade-offs, and debated by some officials who don't fully appreciate the rules of having cake and eating it too.

Rounding out this week's "unusual" theme we have interest rates continuing abruptly higher.  On a week with several major calendar events, including the mighty jobs report and the Minutes from the latest Fed meeting, it's no surprise to see volatility in mortgage rates.

Unfortunately, none of that volatility was due to any of the usual suspects!  The Fed Minutes and the Jobs report preceded the quietest, most inconsequential hours of bond market trading of the entire week.  Instead, Europe continues to dominate the global rate landscape.  We discussed this in detail last week.

At issue is the potential for a European version of the taper tantrum--the aggressive selling of bonds that followed the Fed signalling its intention to wind down its bond buying program.  When investors sell bonds, rates rise.  While this particular tantrum is centered in Europe, the interdependencies of global bond markets mean that US rates have been pulled higher.

This all began on June 27th when the President of the European Central Bank (ECB), Mario Draghi, made several comments regarding the health of the Eurozone economy and the relative victory of "reflation" over "deflation"--concepts that suggest the imminent tapering discussions.

Now this week, we have confirmation of those discussions via the ECB's meeting minutes as well as confirmation that investors are already shunning European bonds (via a horrendous bond auction in France).  Both of those developments hit on Thursday morning, highlighted by "taper-related headlines" in the following chart. 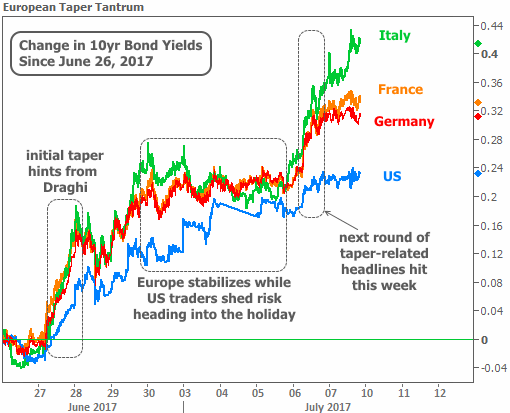 The level of European bond market weakness is getting serious now, with German 10yr yields (as the biggest economy in the EU, Germany's 10yr rates are the benchmark for the EU 10yr rate) now breaking above 2017 highs.  Remember those bond market interdepencies?  This isn't the sort of environment where US 10yr rates can simply continue pushing 2017 lows. 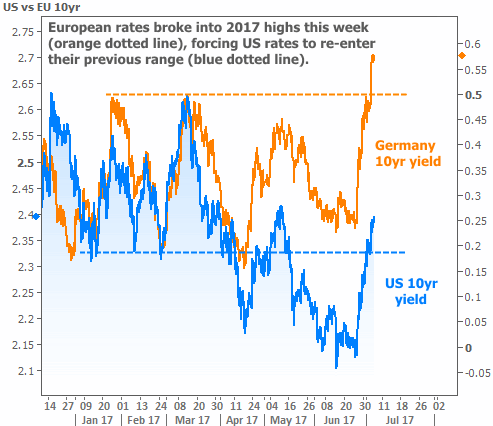 If it's any consolation the pace of movement in mortgage rates has been slightly gentler vs Treasuries, and especially vs European bonds.  Nonetheless, the past 2 weeks have been on pace with the worst 2 since the election.  Actual day-to-day rate sheet changes are happening more quickly than weekly rate surveys have yet conveyed, although Freddie Mac's data began to acknowledge what we already discussed last week.  More acknowledgement is likely to follow next week. 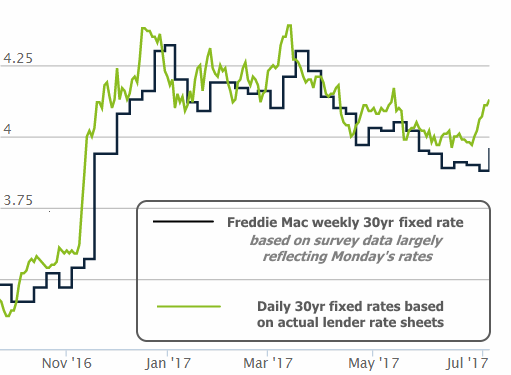