Mortgage rates are driven primarily by the bond market. Bonds can be a safe haven for investors if there are high-risk events on the horizon, or if headlines create a spike in uncertainty. If events pass without too much drama, and if uncertainty ebbs, investors move money back out of bonds, thus pushing rates higher. That was this week in a nutshell.

Heading into the week, rates were in line with 7-month lows thanks to last Friday's weak jobs report.  Rates moved slightly lower from there as investors braced for more drama surrounding big-ticket events at the end of the week.  Of these, the most important was the hotly-anticipated Senate testimony of former FBI Director Comey.

Back in mid-May, both stocks and bonds reacted forcefully to news that Comey's memos might incriminate President Trump.  The "I-word" (impeachment) was thrown around excessively.  It seemed like big news at first glance, but there were plenty of details to work through before any high drama could be confirmed.

Stocks were quickly able to shrug it off, putting the burden of proof on the drama.  Bonds, on the other hand, had to account for the possibility of drama (after all, they're the "safe haven").  Risks surrounding elections in the UK and a policy announcement from the ECB (European Central Bank) also helped bonds hold their ground.

Of those 3 big-ticket events, only the ECB proved helpful to bond markets.  That helpfulness was overshadowed by an absence of significant drama in the Comey hearing.  The UK election technically did produce some drama, but not the kind that bond markets were hoping for.

The result was a steady move higher in rates throughout the week.  10yr Treasury yields (the benchmark for momentum in longer-term rates like mortgages) rose almost perfectly in line with levels seen just before last week's jobs report. 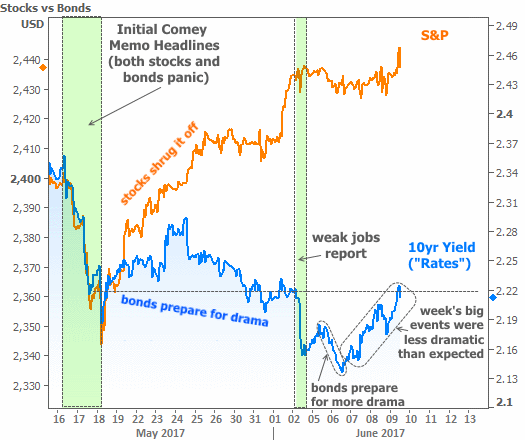 In the bigger picture, this week wasn't any more volatile than most other examples.  Additionally, the longer-term trend since March 2017 is arguably toward lower rates.  The potential problem is the that rates continue struggling to break below the gap seen in the following chart (and discussed in last week's newsletter). 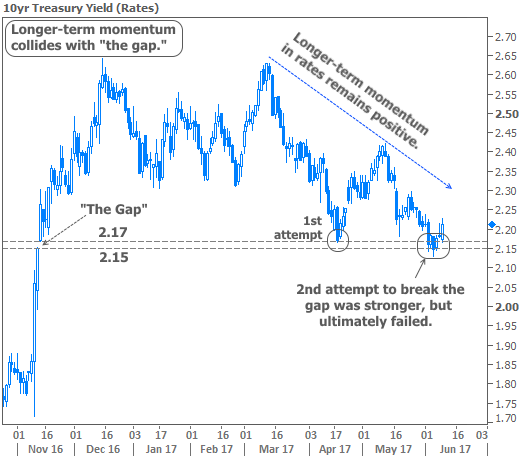 These sorts of gaps can be significant lines in the sand for investors.  This particular gap corresponds to average mortgage rates near 4.0%.  As such, 10yr yields will need to break well below 2.15% if we're to see widespread availability of conventional 30yr fixed rates in the high 3 percent range.

Elsewhere in the mortgage and housing markets, the news was mixed.  CoreLogic's Home Price Index logged an impressive 6.9% year-over-year pace of appreciation, but that was down slightly from 7.1% last month.  Tight supply and a competitive bidding environment in some areas remain common themes in the home price story.

Homeowners are well aware of the issue.  Fannie Mae's Home Purchase Sentiment Index showed a record number of respondents (since the survey's inception in 2011) think that now is a "good time to sell."

On the policy front, the NAHB lobbied for the mortgage interest tax deduction and the House passed the Financial Choice Act, which would make several changes to Dodd-Frank as written.  That said, if the bill remains alive, it would almost certainly be revised by the Senate--perhaps substantially.

In the coming week, the focus will be squarely on Wednesday's Fed Announcement.  A hike of the Fed Funds Rate is almost universally expected.  Markets have priced it in.  In other words, next week's Fed rate hike doesn't mean mortgage rates will move higher.

The last time the Fed updated its forecasts, the implied rate-hike pace was slower than markets expected, resulting in a nice move lower for rates.  If the Fed offers a similar surprise this time around, it could reinvigorate the battle for longer-term rates to break below "the gap."  But if the Fed speeds up its outlook, "the gap" could quickly begin to look like "the floor" (at least for now).