Although markets entered the week on the lookout for more political headlines, it was the Fed that ended up taking center stage. The Minutes from the early May Fed meeting contained important details on the Fed's plan to slowly decrease the amount of bonds on its balance sheet. This ended up being good news for both stocks and bonds. Here's why...

The Fed began buying mortgage-backed-securities (MBS) at the onset of the financial crisis in order to restore investor confidence in the shaken sector.  Until then, mortgage rates were like a train car that had detached from the rest of the bond market and the Fed's efforts are largely responsible for preventing the mortgage market from going totally off the rails.

As the depth of the crisis became more evident, the Fed began expanding its buying program to include US Treasuries.  With the Mortgage market reattached to the broader bond market train, any benefit to Treasuries ("the locomotive," basically) also helped pull mortgage rates lower.  It was a synergistic system that played a key role in getting mortgage rates to all-time lows by the end of 2012.

These bond buying programs were referred to as quantitative easing, or QE.  While QE programs were active, the Fed was growing the size of its balance sheet by adding the bonds it was buying as assets and incurring liabilities it owed to depository institutions (essentially the "debt" used to pay for the new bonds).

The "taper tantrum" in 2013 resulted from the Fed hinting that its balance sheet expansion would soon come to an end.  The Fed began adding fewer and fewer assets/liabilities until its balance sheet stopped expanding.

Despite this new equilibrium, the Fed continued to buy substantial amounts of bonds through its reinvestment policy.  In simple terms, the Fed bought a lot of loans.  It was a lender who collected principal and interest payments, much like a mortgage lender would.  Any principal repaid was subsequently REINVESTED back into the market of origin.

To break this down even further, let's imagine the Fed buys YOUR $300,000 mortgage.  The Fed's liabilities increase $300,000 as do its assets.  Let's say your payment is $2000/month with an average of $1500 interest and $500 principal.  When you make your payment, the Fed COULD use your $500 of principal to reduce its liabilities and assets.  Instead, under the reinvestment policy, it took that $500 and bought more mortgages with it.  That's another $500 in liabilities and assets for the Fed.  The balance sheet remained unchanged.

This policy means the Fed can be a big buyer of Treasuries and MBS.  That excess demand in the marketplace pushes bond prices higher and rates lower--something the Fed judged necessary to the facilitate its goals of rekindling employment and inflation.

While some experts may disagree, the Fed feels it's close enough to achieving its goals that it can begin removing some of that excess demand.  It will remove this demand by slowly decreasing its reinvestments.  That's what this week's Fed meeting Minutes were all about.

The Fed already broached this topic in the last meeting back in mid-March, but this time they went into greater detail.  Market participants anticipated this, but the details ended up being a bit more market-friendly than expected.  For example, the Fed will only adjust its reinvestment caps every 3 months, as needed, until it feels the balance sheet is where it should be.  In contrast, the tapering plan in 2013 laid out a set reduction of new bond buying at every Fed meeting until new bond buying was completely eliminated.

The bottom line is that investors can hold out a bit of hope that economic conditions will evolve in such a way that the Fed won't be overly-aggressive in reducing its balance sheet.  This leaves more excess demand in the marketplace.  That benefits both stocks and bonds (aka "rates"), and both responded to this week's Fed Minutes accordingly. 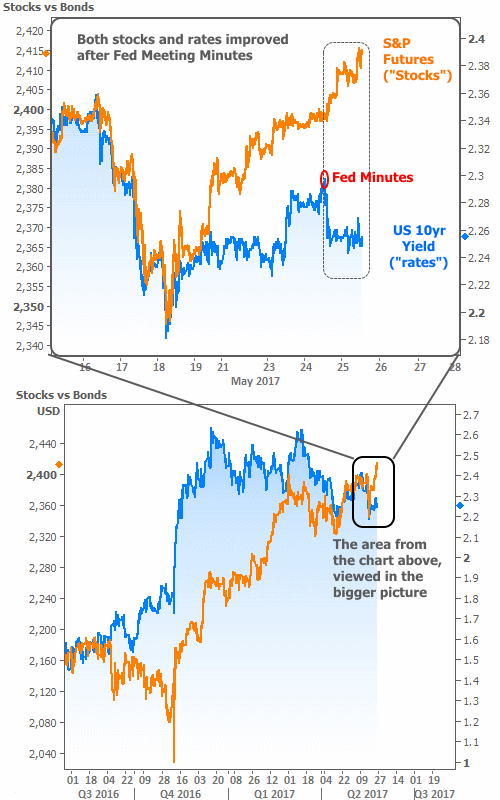 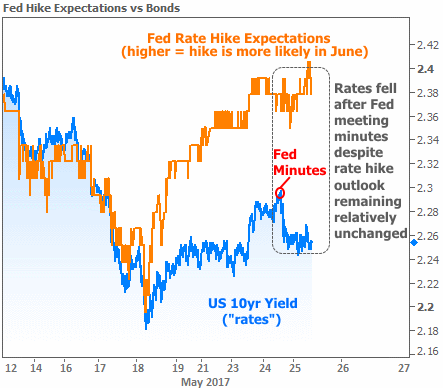 Bottom line: the Fed finally broke the news on its reinvestment strategy and both sides of the market took it in stride.

In housing-specific news, this week's key data release was the Existing Home Sales report from the National Association of Realtors (NAR).  Although Existing Sales fell short of the median forecast calling for an annual pace of 5.65 mln units, the 5.57 mln unit result wasn't far off.  The overall trajectory of sales growth remains positive despite some cooling in the pace of price gains. 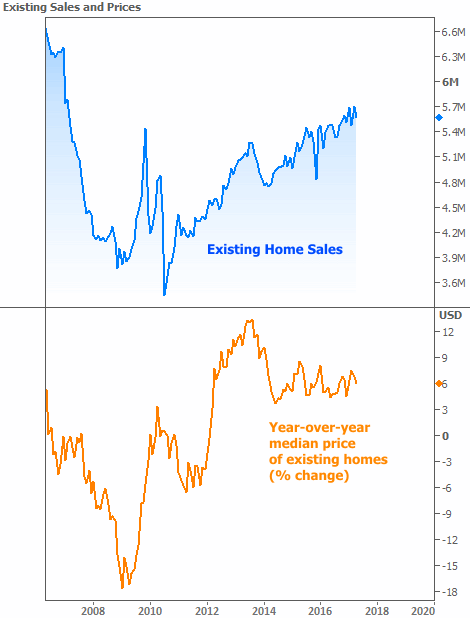 Sales data released by the Census Bureau also missed the mark, but by a much wider margin.  The annual pace of New Home Sales fell to 569k from an upwardly revised 642k last month.  The median forecast had been 610k. 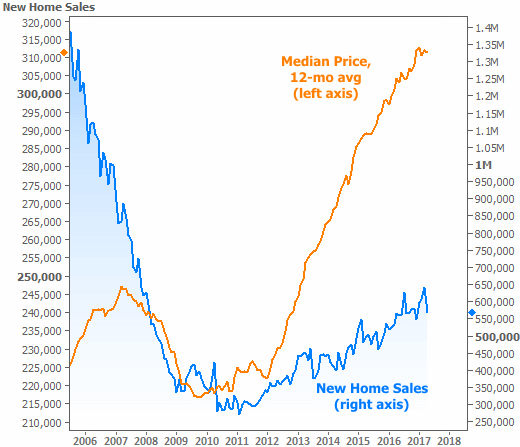