Heading into last weekend, financial markets were eagerly awaiting French election results, as well as more info on the Trump administration's tax reform plan. While the market reaction wasn't much of a surprise, it leaves us in an uncertain position ahead of next week's Fed announcement.

The previous newsletter noted that markets were largely ready for Le Pen to fall short of an outright victory, but that the confirmation would be worth some extra pain for rates.  The following chart shows how that pain played out. 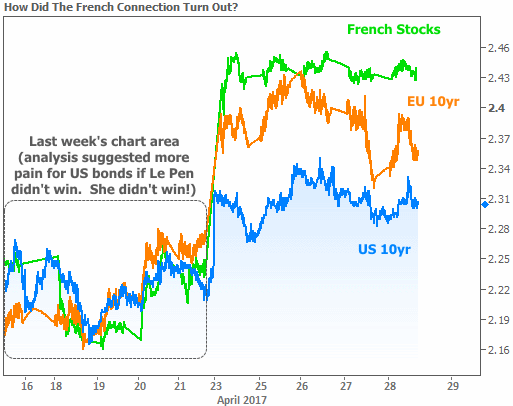 At first glance, it's fair to derive some optimism from the fact that European markets (which pulled rates higher) were unable to move much higher this week.  In other words, the green and orange lines in the chart above were generally flat after Monday's initial spike.  But if we look at a longer-term comparison between US and EU rates, caution might be more appropriate than optimism.

Whereas US rates were able to break below 2017's range, EU rates experienced a definitive bounce.  The next chart shows US and German 10yr yields/rates (because Germany is the EU's biggest economy, its rates serve as the EU benchmark).  If EU rates remain unwilling to break below the dotted line, it will be hard for US rates to make rapid progress. 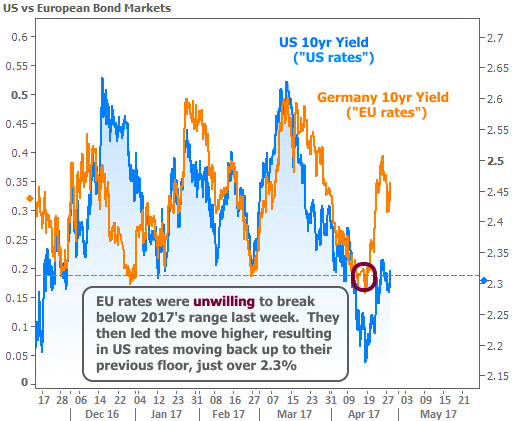 Of course, EU rates aren't the only consideration for US bond markets.  The stock market also shifted in a way that might make things tougher for bonds.  Stocks had been losing ground over the past 2 months--especially since the mid-March healthcare bill snafu.  This week, however, they bounced higher, decisively breaking their trend of "lower highs" seen in the following chart. 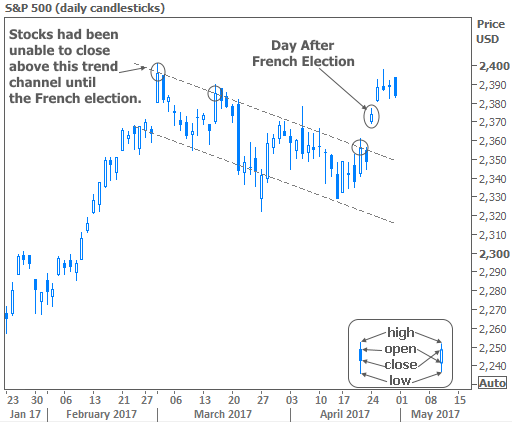 We might take the stock breakout with a grain of salt for a few reasons.  First of all, it's earnings season, which often provides some extra levity.  From a technical perspective, the S&P (the index of choice among traders) was unable to break above March 1st's all-time highs.  If that ceiling remains intact, stock traders will increasingly think about checking out the lower side of the range.  To whatever extent that happens, bond markets would reap some of the benefits of the money flowing out of stocks (more bond buying = lower rates).

For now though, bonds/rates are on the proverbial fence.  Actually, it might be more appropriate to think of rates as being "in between floors" of the building that contains all rate movement.  In terms of 10yr Treasury yields, 2.31% was a solid floor for months.  Rates tore a hole in that floor and fell through in April, hitting the next floor of 2.17% before picking themselves up and deciding what to do next.

When rates tear holes in floors/ceilings, they often return to patch things up.  That's where we are now (right around 2.30%).  The big question is what side of the floor/ceiling we'll end up on after the repair is complete.

Next week's Fed announcement stands a good chance to be the deciding factor.  Although the Fed is not expected to hike rates at this particular meeting, investors will be tuned in to any minor verbiage changes for clues as to June's rate hike probabilities.  Of particular interest is whether or not the Fed makes any changes to its policy of reinvesting proceeds from its bond holdings back into bond markets (reinvestments are good for rates).  We know this is coming, but we don't know when.

For all of the uncertainty and anxiety in financial markets, housing data served as a bright spot this week.   The Census Bureau reported a surge in March's New Home Sales, very nearly matching the post-crisis high.  The more timely Pending Home Sales index lost some ground, but remains in great shape in the bigger picture--especially considering that "tight inventory" is the biggest limiting factor at the moment.

The MBA's refi index responded to last week's lower rates and three of the major home price reports (Black Knight, FHFA, and CoreLogic) showed the expected cooling of home price appreciation has yet to arrive.

There was even good news in terms of underwriting guidelines as Fannie Mae released several updates aimed at making it easier for potential homeowners with student loan debt to qualify for mortgages.