This week, a report from Fannie Mae suggests the housing market is losing momentum due to declines in single family construction spending and the prospect of higher interest rates in the future. Whether or not this should be troubling is a matter of perspective.

It is true that certain construction metrics have been lagging.  In a separate report this week, housing starts fell sharply to their lowest levels in more than a year. 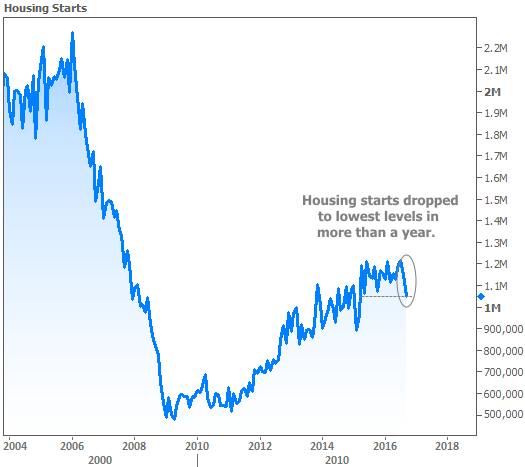 In and of itself, this drop in Housing Starts could be troubling, but by the time we look at the week's other data, the situation doesn't seem so dire.

Right off the bat, it's important to remember that any monthly economic data is inherently volatile.  One rogue month of weakness in Housing Starts (down 9.0%) doesn't speak to a shift in the bigger picture.  A stronger case could be made if the other housing-related data was similarly weak, but if anything, this week's data argues the opposite.

In the same report as Housing Starts, Building Permits told a completely different story, rising 6.3% from last month and 8.5% from last year.  Builder Confidence fell, but remained at the 2nd highest level of the year.

Existing home sales were unabashedly strong, not to mention first-time buyer participation at a 4-year high, and a 5.6% annual improvement in prices.  The following chart shows how several of these metrics have evolved (in terms of percent change) from "peak housing data" in June 2005. 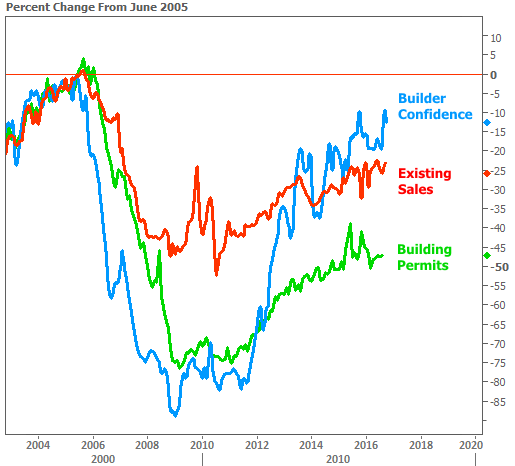 Clearly, the housing market is not "in trouble" at the moment.  Waning momentum, on the other hand, is a possibility we have to consider.

The waning momentum thesis relies, in part, on the expectation of higher rates.  Fannie, and others, are worried that rates could now be at greater risk of a long-term uptrend as global central banks begin unwinding their easy money policies.

This fear is quite valid.  Indeed, rates are only as low as they are due to global central bank monetary policy.  Naturally, if the European Central Bank (ECB) announced its intention to taper asset purchases as the Fed did in 2013, a similar taper tantrum could be the result.

Markets have been concerned enough about another taper tantrum that rates have been moving steadily higher in anticipation.  Whether or not they're "high" on an outright basis, is a matter of perspective. After all, they've only been this low for this long one other time in history.  (The following chart uses 10yr Treasury yields as proxy for movement in longer-term rates like mortgages.) 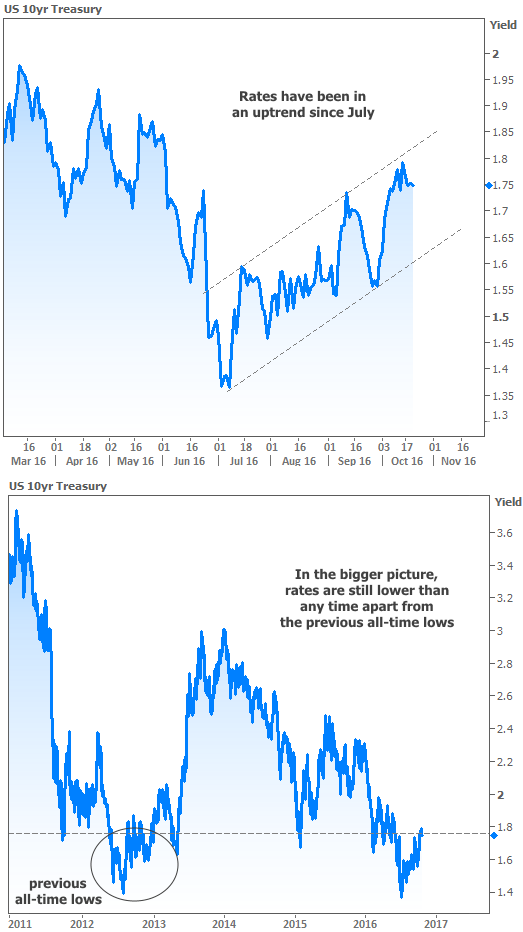 The preceding chart is bittersweet.  It's great that rates have been so low, but it also serves as a reminder of just how quickly they can move higher.  Keep in mind that almost no one expected mortgage rates in the 3% range again the 2013 taper tantrum, yet here we are.

If the ECB does indeed cause a similar tantrum things could get scary in the same way they were scary in 2013.  But at that point, the global economy would need to be firing on most of its cylinders in order to keep rates heading higher.  Otherwise, there's no reason to believe the life-expectancy of a new taper tantrum would be better than the old one.