Have you ever wondered if there was some secret force driving a majority of market movement?  Trust those instincts.  There really is one elephant in the room when it comes to market movement, and it's not so secret!  In fact, there are several sightings just this week.

In the previous newsletter, we examined several examples of "consolidating ranges" in interest rates.  These ranges create a series of lower highs and higher lows in rates.  If we draw lines along those highs and lows, they eventually converge.

Conventional market wisdom holds that rates tend to make bigger moves when they break out of these patterns.  Early June was a classic example (as seen in the following chart).  But the more recent example is having a hard time making up its mind. 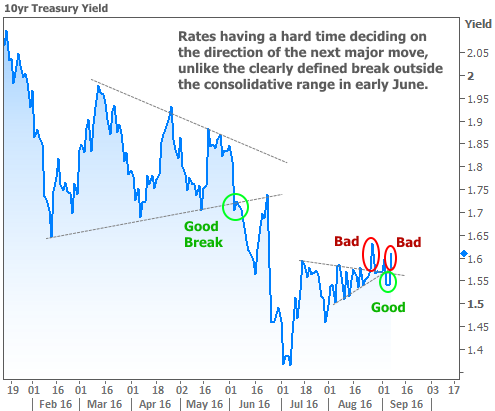 To be sure, there are never any sure bets when it comes to how a particular market pattern will play out.  If rates always did what they did in June, traders would always bet accordingly and no one would make money.  It's not uncommon to see several breakout attempts before markets finally figure it out and commit to move substantially higher or lower.

While we can't be sure of the direction of the next move, we can unequivocally know what will cause it: "monetary policy of the world's major central banks."  This is not-so-secret market mover refers to the rate-setting and bond buying programs of the big central banks like the Fed, the ECB (European Central Bank), and the BOJ (Bank of Japan).  Collectively, this is the only game in town when it comes to any major change in interest rates.

Even if it's the European Central Bank that hints at a decreased willingness to prolong its bond buying program (which could be several months in the future), interest rates in the US can feel the immediate need to move higher in anticipation of decreased long-term bond-buying demand (greater demand for bonds causes bond prices to rise and yields/rates to fall).

In fact, several of these factors are causing volatility for rates this week.  Exceptionally weak economic data on Tuesday (ISM Non-Manufacturing) led markets to abruptly adjust Fed rate hike expectations.  Then on Thursday, the ECB did indeed hint at a decreased willingness to extend its bond buying program.  The effect on interest rates was plain to see, as was the correlation with Fed rate hike expectations.

The following chart shows those rate hike expectations along with 10yr Treasury yields (the best proxy for momentum in longer-term interest rates like mortgages). 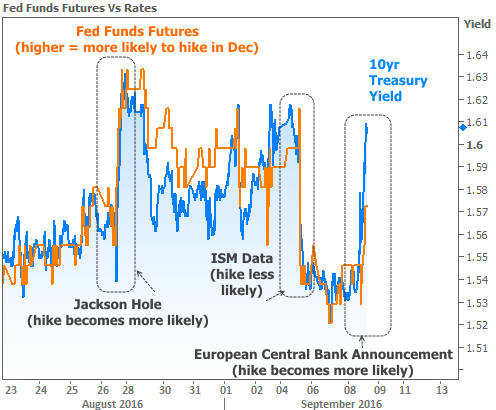 This is not a new or isolated phenomenon.  A quick look at a longer-term chart quite clearly shows the extent to which interest rates have been generally transfixed by Fed rate hike expectations. 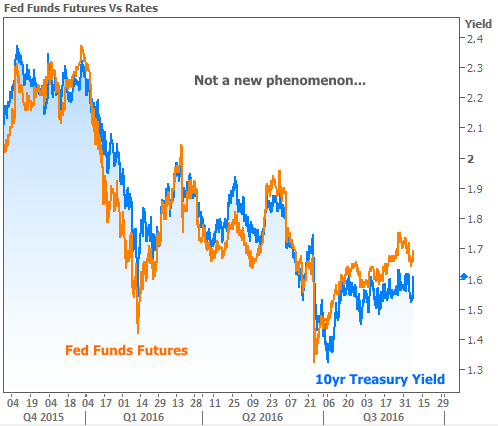 While there is always plenty to see and discuss when it comes to financial markets, and while certain events may seem extra important at the time, it's good to remember that interest rate movement all comes back to central bank expectations.

An important caveat here is that "expectations" are very different from actual central bank rate changes.  For instance, mortgage rates and Treasury yields fell AFTER the Fed hiked rates in late 2015.  But rates had risen in the previous 10 months!  Incidentally, Fed members were increasingly talking about their desire to hike rates during that 10 month time frame.  In other words, it was the increased rate hike expectations that caused the rise in mortgage/Treasury rates, rather than the actual Fed Funds Rate hike in December.

With the shorter post-holiday week, there hasn't been much by way of substantial housing-specific news.  Black Knight's Mortgage Monitor showed originations at a 3-year high in the second quarter, with a substantial jump in both purchases and refis.

CoreLogic released its latest Home Price Index.  The results were positive, suggesting that prices may not be decelerating quite as quickly as the firm suggested last month.  Even so, CoreLogic is calling for an annual increase of 5.4 percent over the next 12 months--a modest deceleration from the current 6.0 percent pace.

Fannie Mae's Home Purchase Sentiment Index fell slightly in August after hitting survey highs in July.  There were notable changes both in the amount of respondents who think home prices will go up in the next 12 months as well as those who think it's a good time to sell.