Interest rates managed to find their footing this week after being pushed higher by last Friday's strong jobs report.  That leaves them in the same sideways range that has persisted for weeks.

The longer these narrow ranges persist, the more speculation we see on the part of financial media about larger-than-average movements in either direction.  All too often, the analysis starts and stops with Stocks and Oil.

For instance, if rates happen to move higher somewhat abruptly, financial media is quick to blame stocks and oil, provided that stocks and oil are also moving higher.  Unfortunately, this relationship is short-term at best, and completely irrelevant at worst.

Yes, I just said the notion of stocks and oil prices correlating with interest rates could be irrelevant.  If that sounds blasphemous to you, consider the following 2 charts showing the long term (lack of) correlation. 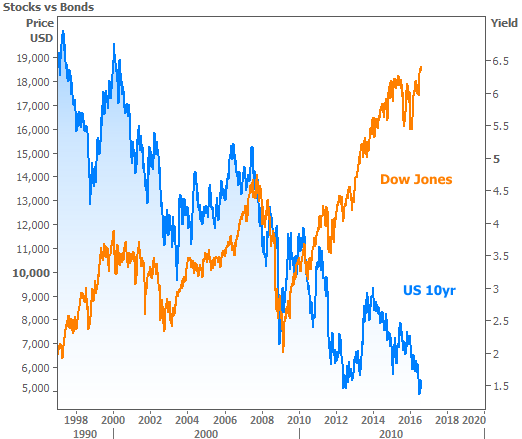 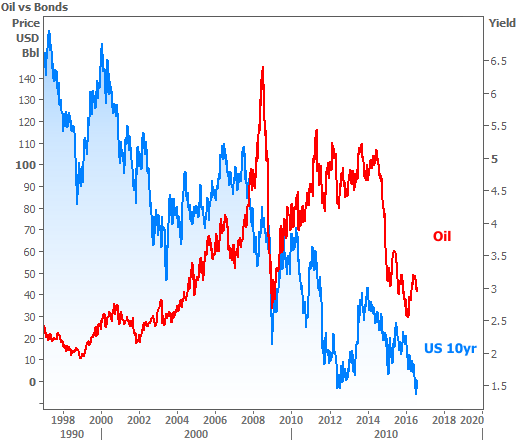 If it looks like rates and stocks have moved in exactly the opposite direction since 2009, it's because they have!  The correlation with oil is slightly more defensible, but still far from relevant in the short term.  It's currently receiving extra attention due to the massive drop in 2014, persistent weakness since then, and fear that prices will continue to fall.

Some would argue that low oil prices mean lower inflation (goods cost less to ship), thus preventing the Fed from hiking.  Although this is an imperfect conclusion when it comes to short-term cause and effect, it gets us much closer to the heart of the matter, because it addresses market movement in the context of the Fed.

Two things and two things only are responsible for the big-picture move lower in rates: global growth concerns and the actions taken by central banks (like the Fed) to address them.  The 10yr bond yields of the countries with the world's biggest and most active central banks tell the story: 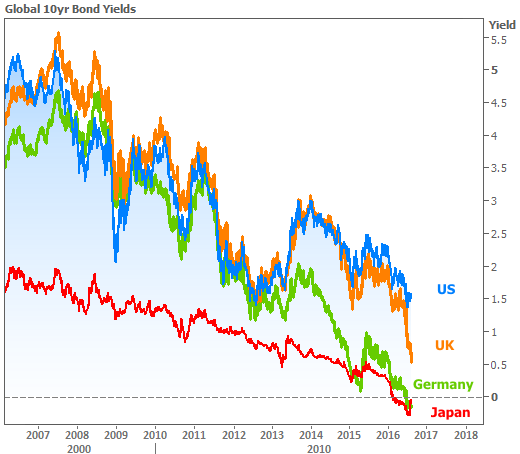 It's this big picture correlation--this global race to the lowest rates--that drives the long term trend lower.  Short term trends toward higher rates are merely a necessary byproduct of the larger-scale downtrend.  Sometimes, these moves higher in rates will line up with moves higher in oil and stocks, but it's central banks that will ultimately set the tone.

To that end, we have a bit of a lull between now and the next major dose of information from the Fed.  The Jackson Hole symposium coming up at the end of the month is often viewed as a venue for more candid communication from the Fed.  Markets are waiting to see if Yellen will give any solid clues about a Fed rate hike before the end of the year.  The stronger that possibility becomes, the more of a pullback we could see in rates--especially if European and Japanese rates end up taking a break from their recent push to all-time lows.

While some might see it as a sensational story with the goal of indirect advertising, there's no question that a Redfin article got people talking this week.  The gist is that "lots of people don't pay full pop for real estate commissions."  Oh and by the way, Redfin doesn't charge sellers full pop.

Two separate reports came out regarding improvements in distress/delinquency--one from CoreLogic and one from the Mortgage Bankers Association.

In separate news, the MBA pointed out a surge in refi apps--especially for government loans, and a normal seasonal stall in New Home Sales.