To put it mildly, the housing market has faced significant challenges in the wake of the financial crisis.  One of the key challenges has been slower growth in new construction, which has arguably contributed to concerns about a plateau in home sales at various points in the past few years.

2013 saw Existing Home Sales--which does not include new homes--peak before breaking above the 2009/10 peaks.  Sure, we could point out the fact those earlier peaks were only made possible by the homebuyer tax credits, but it would have been an important symbolic victory nonetheless.

Meanwhile, construction metrics continued a slow, steady climb to post-crisis highs.  That sounds like a good thing, but the fact is that the pace of the improvement was much more gradual compared to Existing Home Sales (see this in the chart below where Housing Starts and Building Permits barely budged relative to Existing Home Sales in 2010-2012).

Just this week, we saw Existing Home Sales begin to edge above a year-long plateau to hit the best levels in more than 9 years.  Yet Housing Starts and Building Permits (which measure residential construction activity) are stuck under 2015's highs. 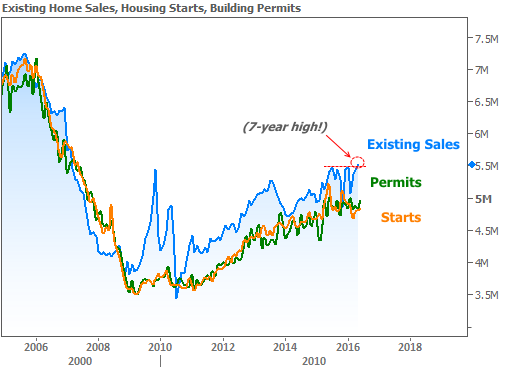 How concerned should we be about this lack of progress in construction activity?

The answer will likely vary depending on your individual outlook on the economy and the housing market.  There are several forces at work here.  One of the most frequently-cited is that it's simply in builders' best interest to build fewer, bigger houses for economic reasons.  The other major consideration is the relative boom in multifamily construction.  Both of these would help explain builders' ability to remain much more upbeat than residential construction numbers would suggest. 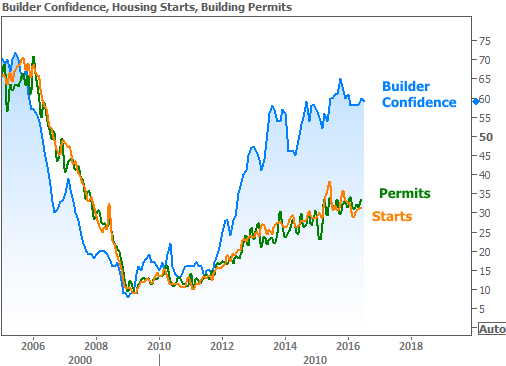 While an ebb in the multifamily boom could theoretically divert more construction resources toward the single family sector, demand has to be there and new entrants to the housing market have to be able to qualify to buy homes.  These are issues that the housing industry can't even come close to solving on its own.  They will continue to prevent the type of expansion in home sales that we've seen in past cycles.

The nice thing about this sort of plateau is that it doesn't convey exuberance or doom.  In fact, the underlying factors do more to restrain exuberance than anything.  The implication is that slow, steady growth can continue, to whatever extent other variables stay steady (i.e. rates, jobs, economy).

Specifically, low rates have helped affordability, and recent rates have been some of the lowest in history.  Looking at trends in 10yr Treasury yields (which tend to set the general tone for mortgage rate movement), rates have been holding under a ceiling that had previously acted as a floor.  If this ceiling is broken, however, the affordability component of the home sales equation could start to suffer. 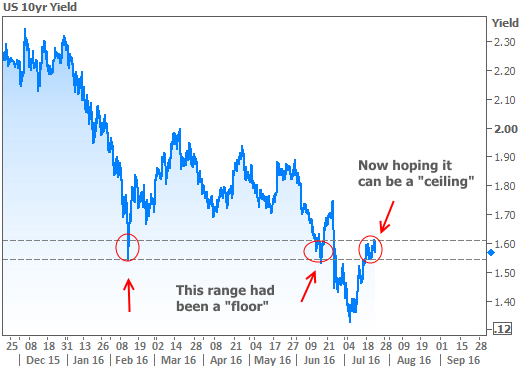 If the battle with this ceiling isn't resolved before then, next week's events will probably help speed the process along.  The headliners include announcements from the Fed and the Bank of Japan.  The Fed is not expected to hike rates at this meeting, but they could drop hints, given ebbing panic surrounding the UK's vote to exit the EU, as well as the stronger jobs numbers earlier this month.

The Bank of Japan was rumored to be considering a big shift in its monetary policy involving "helicopter money" (distributing cash directly to the public).  Even though officials have dispelled those rumors, markets are nonetheless anxious to see if any additional stimulus will be announced.