The post-election spike in mortgage rates kicked into higher gear this week, with most lenders near the worst levels in more than 2 years. In bittersweet juxtaposition, this week's Existing Home Sales data (from October) was the best in nearly 10 years! Is the writing on the wall for the housing market? Yes and no.

First off, let's put to bed the question of whether a rapid rate spike affects housing and mortgage markets.  The Mortgage Bankers Association's (MBA) application data is helpful in this endeavor for 2 reasons.  First, it's a weekly report, thus keeping better pace with day-to-day changes in mortgage rates.  Second, it includes both purchase and refi applications, allowing us to distinguish effects on home sales vs mortgage market activity.

The best recent case study of a rate spike's effects on housing/mortgage markets is the mid-2013 taper tantrum.  In its first 6 weeks, the taper tantrum saw rates rise roughly 100 basis points (1%).  Average 30yr fixed rates moved from 3.5% to 4.5% during that time.  The following chart shows the changes in rates relative to the MBA's weekly purchase and refi applications numbers. 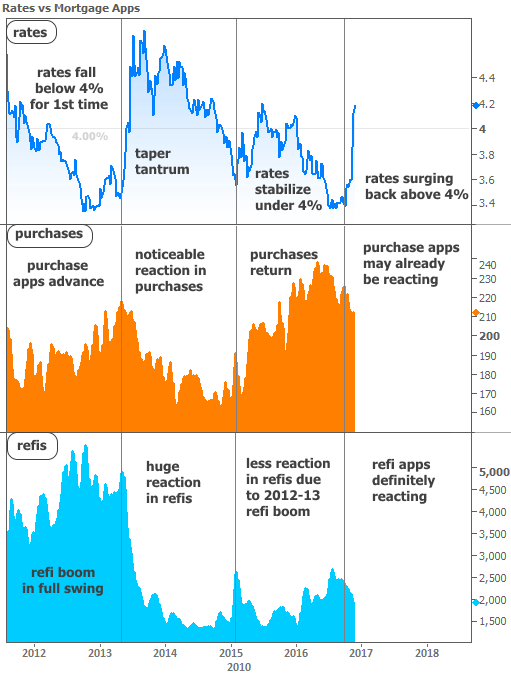 For instance, exceptionally low rates don't necessarily create huge refi demand on their own.  After all, rates were near all-time lows recently, but refi applications were nowhere near recent highs, largely because homeowners and homebuyers already had the opportunity to lock in all-time lows during the 2012-13 refi boom.

We can conclude that in order to draw out peak refi demand, rates must fall far enough past the levels that were available to a large percentage of current homeowners.  The upside to this, from a loan originator's standpoint, is that refi demand doesn't stand to lose as much ground as it did during the 2013 taper tantrum.

What about purchases as a function of rates?  This is a hot topic among talking heads, with some arguing that purchases simply "don't care" about rising rates.  Clearly that's not the case.  In fact, purchase applications essentially turned on a dime as the taper tantrum spike began.  It wasn't until rates stabilized under 4% that purchase apps began to rise again.

From there, we must simply ask ourselves how much movement constitutes a "big deal."  This is subjective, of course.  To many, the drop in Existing Home Sales in the 2nd half of 2013 was a big deal. After nearly 3 years of gains, sales fell into negative territory (annual basis) and remained there for almost an entire year. 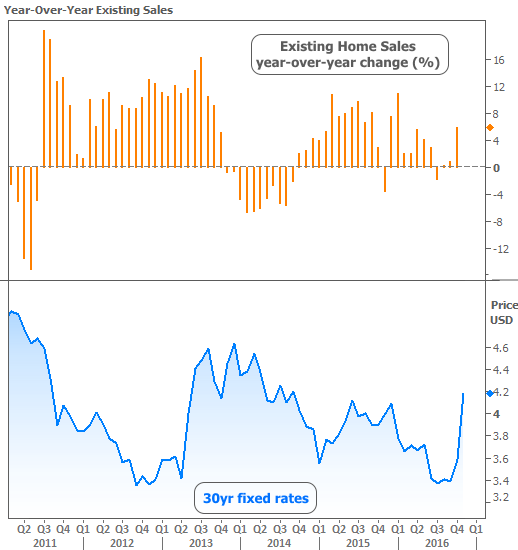 For a counterpoint, consider the longer term trend in the next chart.  The upper pane of the chart shows recent trends in actual monthly home sales (not annual % change), with the taper tantrum effects highlighted.  The lower pane, however, zooms out to include perspective that's been missing.  There we can see the taper tantrum merely made for a course correction amid the bigger-picture trend. 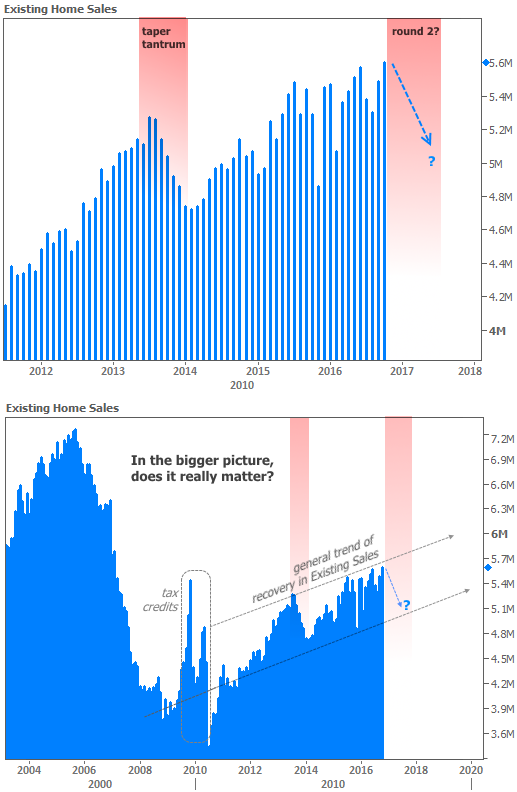 This added perspective means you're free to choose the outlook that suits you.  If you focus on shorter term effects, you may well conclude that the current spike in rates--rapidly approaching the size of the taper tantrum--means home sales are destined for a correction.  If you focus on the longer term effects, you may subsequently conclude such a correction wouldn't be that big a deal in the bigger picture.

Ultimately, much depends on a host of additional variables, but the underlying point is simple: big rate spikes will always have an impact.  The farther you step back, the smaller those impacts will look.

In other housing-related news to be filed under "perspective" this week, the FHFA announced an increase in conforming loan limits for Fannie and Freddie.  The new limit will be $424,100, up from $417,000.  To some buyers, this is insignificant, but to others, it could make all the difference in being able to afford the home of their dreams.  Ideally, the limit can now keep pace with price appreciation going forward.