Several sources for mortgage rate data are doing consumers a major disservice this week. At least two of them are claiming that the average top tier 30yr fixed rate is still under 3.00%.  It's not.

One disclaimer right up front: different companies have different rate-quoting policies.  Even within the same company, borrowers can typically opt for different combinations of rates and fees.  Sometimes two rates that seem very different are actually very similar.

Still, none of those subtleties would get the average lender under 3.00% this week--especially not by Friday.

Let's focus on the specific example of Freddie Mac's weekly rate survey which showed 30yr fixed rates at 2.98% 2 short days ago.  We've discussed the downsides of this methodology before.  Specifically, Freddie collects responses from lenders through the first half of the week and reports the results on Thursday (Wednesday this week, due to the Veterans Day holiday).

Most of the responses come in on Monday.  That means the survey is better viewed as "Monday vs Monday" as opposed to "weekly."  It's one thing to say "here's where rates were as of this past Monday" and something entirely different to say "here's where mortgage rates are this week."  In the second example, someone might see the news on Thursday or Friday and conclude that Monday's rates are still available.

Monday's rates are not still available!

Obviously, Freddie's methodology will fall short on weeks with lots of market volatility.  This is just such a week!  In fact, rates actually were at their lowest levels in more than a month at the beginning of the week.  Things changed abruptly on Wednesday as seen in the chart of 10yr Treasury yields below (the 10yr closely matches the movement in the mortgage rate market, but allows us to see finer intraday detail). 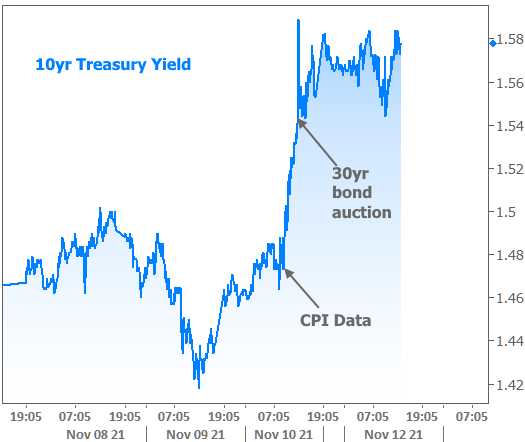 The catalysts were twofold (at least).  In the morning, the Consumer Price Index or "CPI" (a key measure of inflation) rose to the highest level in 30 years.  This was more than economists were expecting.  Inflation pushes rates higher, all other things being equal, so that was a bad way to begin the day.  Then in the afternoon, a scheduled auction of 30yr Treasury bonds was met with very light demand--another cue for rates to continue higher.

By the end of the day, mortgage lenders were forced to raise rates at least once.  Without any improvement on Friday, rates moved higher yet again.  The result is a rather epic mismatch of Freddie's weekly survey data and actual daily mortgage rates. 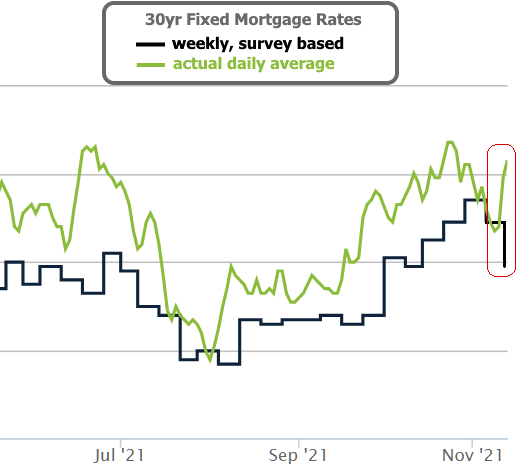 In the bigger picture, this jump in rates coincides with the bond market maintaining a longer-term trend leading up from the near-all-time lows seen earlier this year.

It also reinforces the gradual move up from the all-time lows seen at the end of 2020.  That said, there is also a case to be made for a downtrend in rates based on the "lower highs" in 2021. 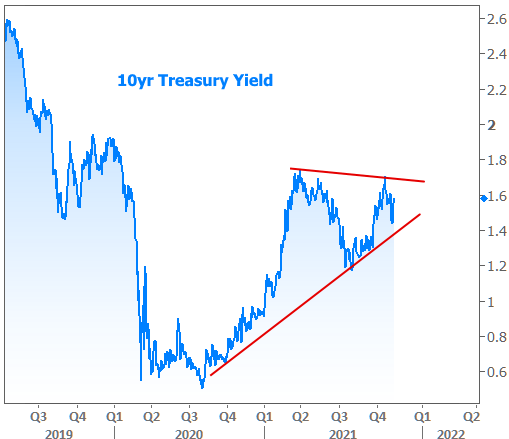 Musings over the future aside, the past 45 days send a clear message that rates have moved quickly to get back near post-covid highs.  That's all we can really know at the moment, even if it's easy to be concerned that rates could continue moving higher.

The ultimate trajectory will depend on covid, the economy, and inflation.  To reiterate, the inflation situation is not great.  Here's the chart of the aforementioned jump in the Consumer Price Index: 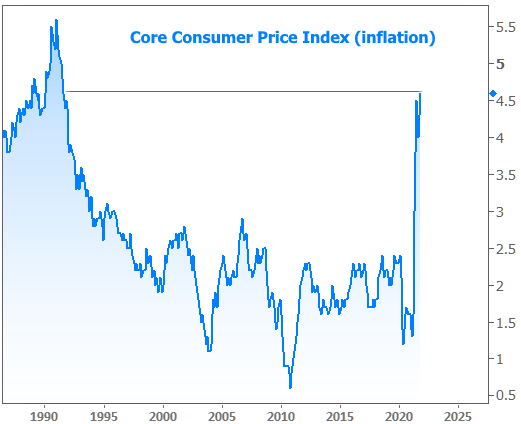 Several recent economic reports have been very strong (not good for rates).  Last week's ISM Non-Manufacturing Index came in at a record level, in fact.  But higher rates and higher inflation bring a natural cooling effect to economic sentiment.  This was even apparent in the short term based on the stock market's reaction to Wednesday's rate surge.

Then on Friday, the Consumer Sentiment reading for November dropped to its lowest level since 2011--largely reflecting inflation concerns. 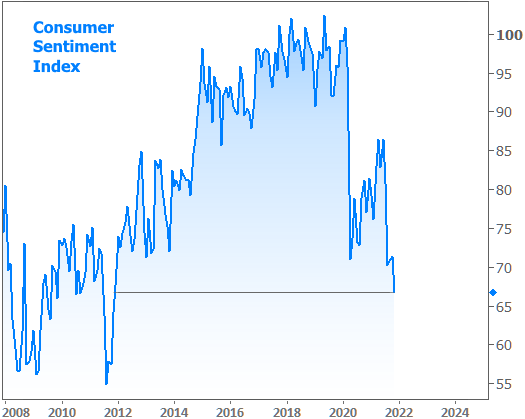 Granted, this isn't the sort of thing that's going send rates significantly lower in the short term, but it does highlight the fact that higher rates/prices eventually become their own reason for rates/prices to move back down.