This week, the Fed announced a reduction in its bond buying. In separate news, the big jobs report was much stronger than expected. Both of these events should have pushed rates higher. So why didn't they?

Let's start with the Fed and its bond buying adventures (also known as QE or "quantitative easing").  The following chart of 10yr Treasury yields (a broad benchmark for "rates") shows the paradoxical reactions to the Fed's previous decisions to stop buying bonds. 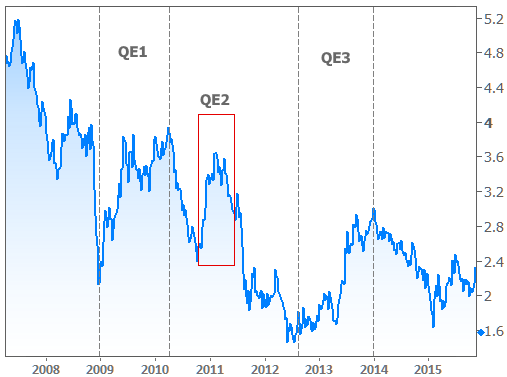 In other words, we knew a paradoxical reaction was a possibility, even though past precedent is never a guarantee.  Beyond that, we also knew that rates were moving higher in anticipation of the Fed's eventual exit.  In fact, by last week, they'd already covered as much ground as they did in 2013. 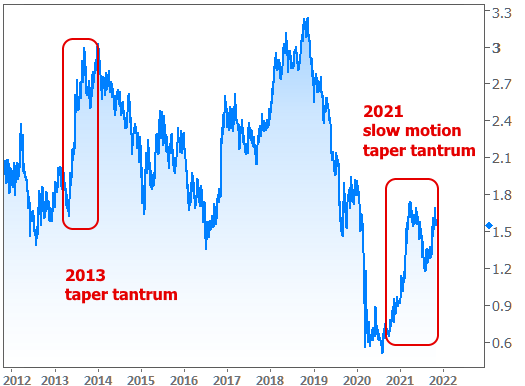 All that to say the reaction to the Fed announcement has arguably been in the works for more than a year.  In that sense, it definitely did push rates higher, but far in advance.  September 22nd offered the most recent example when the Fed most overtly telegraphed the contents of this week's announcement. 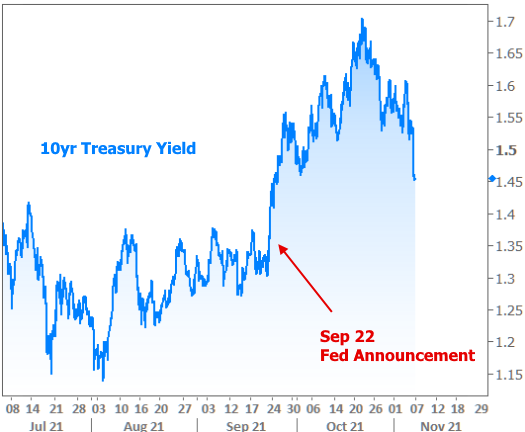 Incidentally, the bond market's first reaction to this week's tapering announcement was also to move slightly higher in rate.  The recovery didn't happen until the following day.  So what caused that drop in yields?  And how about the even more puzzling drop the next morning after the strong jobs report (both "drops" seen in the red highlighted areas below)? 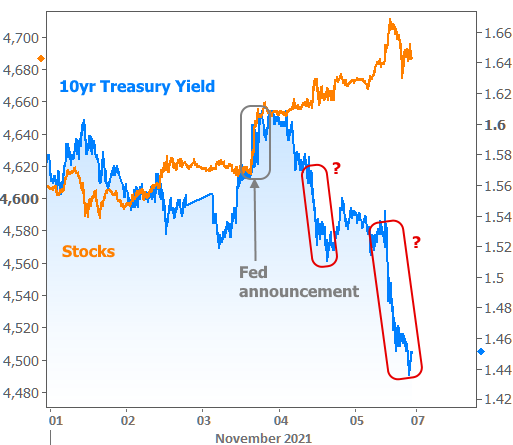 These sorts of pops and drops rarely boil down to only one root cause.  Some traders aren't even taking such timely events into consideration.  But if we had to pick only one leading suspect--the unexpected catalyst for most of the other drama--it would be the Bank of England (BOE).

The BOE?!  Does that even matter to rates in the US?

Yes, in fact there's a strong correlation between bond yields in the US and Europe.  Each will take turns providing inspiration for the other.  The correlations are especially noticeable when one of the major central banks sparks a big move in the respective country's sovereign debt yields.

In other words, if the BOE does something to make British bonds drop precipitously, that will almost always result in at least some downward pressure on US bond yields.  With that in mind, let's look at another version of the chart above.  This time, we'll examine the outright change in US 10yr yields since Tuesday, and compare that to the outright change in British 10yr yields. 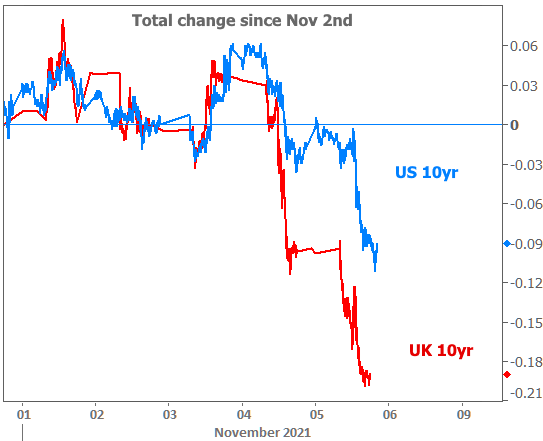 If anything, the US bond market was trying to resist the pull of the British bond market on Thursday.  When the assault continued on Friday, it forced traders to close (or "cover") bets on higher yields (aka "short positions").  The result is known as a "short squeeze," and its momentum is only limited by the amount of short positions in the market (and there were a ton of them).

Bottom line: a surprisingly bond-friendly series of events in the UK spilled over to put downward pressure on US yields.  US traders weren't prepared for yields to move as low as they did and thus were forced to capitulate by buying more bonds (which pushes yields even lower) in order to close their short positions. Lastly, if we had any doubts about the British inspiration, we can simply observe the red line dropping more than twice as much as the blue line since Tuesday.

In the much bigger picture, we can also keep an eye out for shifts in the relationship between covid and the market.  To some extent, we're seeing a similar pattern play out to the one earlier in 2021 when case counts stopped declining and rates stopped rising. 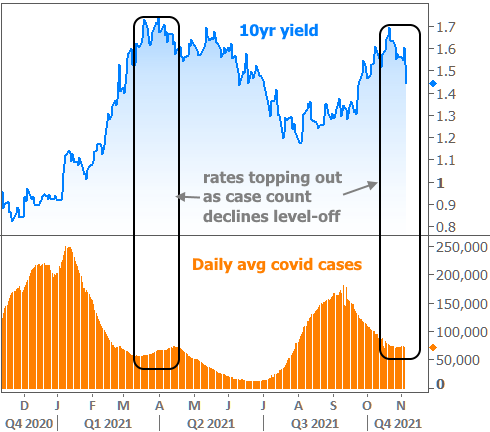