The US presidential election and the ensuing shift in tone on the part of the Federal Reserve were certainly game-changers for financial markets in the short term. But now that the dust is settling from the initial reaction, markets are looking like they're not entirely sure where they want to go from here. Are they confused, scared, or just waiting?

Some confusion is to be expected.  After all, stocks and interest rates moved rapidly higher based on expectations for policies that would take years to fully filter through to the economy.  Moreover, the move took place well before Trump ever took office.

Market participants are OK with that.  It's their job to adjust today's stock and bond prices to reflect their best guesses about a future reality.  They also did a good job of accounting for the increase in consumer optimism seen in recent surveys.

But markets can only run on optimism and expectations for so long.  Eventually, actual changes will have to justify higher stock prices and interest rates.  As some of President Trump's legislative efforts hit snags in recent weeks, fear set in about the sustainability of the initial reaction.

Here too, fear is to be expected.  If policies fall short of expectations, everything might slide in the other direction for markets.

That leaves us with "waiting" as the most logical speed for market movements.  Markets do not like to wait.  Waiting means flat trading levels and less opportunity for profit.  So markets key in on other available options to pass the time.  Chief among these options for bond markets is Fed-Watching.

After the Fed unveiled a faster rate hike forecast in December, investors have become increasingly sensitive to Fed rate hike expectations.  This is especially true for bond markets (i.e. "rates"), as can be seen in the following chart (10yr Treasuries are the best benchmark for momentum in longer-term rates like mortgages). 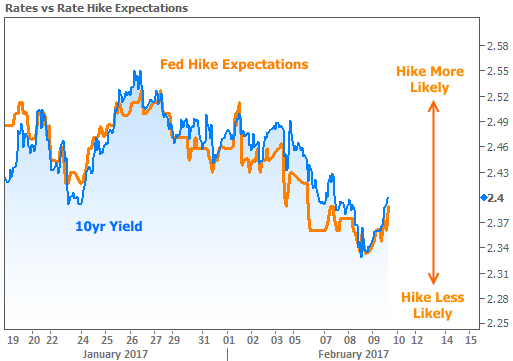 One way markets attempt to read the Fed's mind is by watching the economic data that might cause the Fed to adjust its timing.  Last week's jobs report was a great example of this phenomenon.  Bonds rallied and stocks stagnated.  That rally persisted for the first 3 days of this week, but ran out of steam on Thursday. 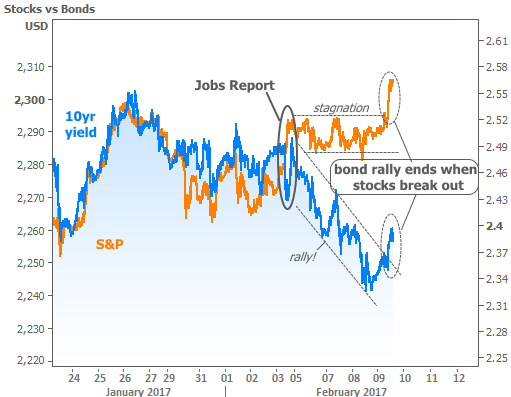 Even though the previous chart highlights a potential connection between stocks and bonds, there are other, simpler ways to explain the recent movement.  They go back to the notion of "waiting," and they're just as valid as any other explanation.  Quite simply, the bounce in rates fits perfectly with the prevailing consolidation pattern (discussed in last week's newsletter). 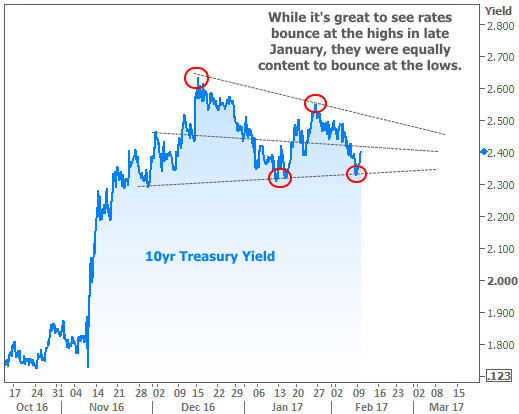 Remaining inside these lines is the bond market's way of "waiting."  Given that the outer lines are converging, this obviously can't go on forever.  When rates finally break out, if they look excited about the direction they're heading, that will be the first real decision they've made in months.

This was a very light week for scheduled data and events.  US Treasury auctions dominated the calendar and caused a good amount of intraday volatility for rates.  As such, lender reprices were more common.

In bigger picture news, the Mortgage Bankers Association (MBA) offered some historical data that suggests the somewhat troubling slide in home-ownership is a trend that may be reversible.

The MBA also put out its weekly report on Mortgage Apps.  They didn't move much overall, but the share of refinance apps fell to a 7.5-year low.  This says more about the recent strength in purchase applications than it does about refi demand, which is merely falling in line with the levels typically seen during interest rate spikes.  In any event, the damage has been nowhere near that seen after 2013's taper tantrum. 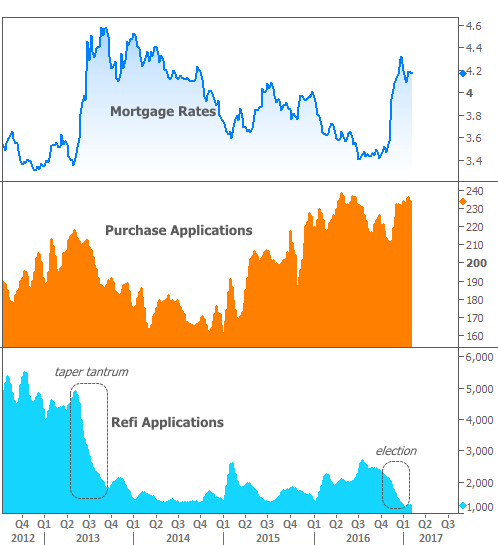