By some standards, the past 3 months already add up to a dire outcome for mortgage rates. This week's Fed announcement helped rates avoid a more dire outcome, but we're definitely not out of the woods yet.

To understand the "more dire outcome" in question, we need to revisit post-election rate movement.  Fortunately, that's quick, even if it's not painless.

The combination of the election and the ensuing changes in the Fed's rate hike outlook pushed mortgage rates higher at one of the fastest paces in history from early November through the middle of December.  From there, markets went on vacation with the rest of the world, giving rates some time to recover.

The vacation ended as trading activity (and rates) ramped back up in mid-January.  Investors keyed-in on Fed Chair Yellen's speech, which served to confirm a shift in the Fed's thinking (specifically, they are indeed thinking about rates moving higher more quickly).

Heading into this week, rates stood ready to break higher from the consolidation pattern (a series of lower highs and higher lows) that took shape after December's highs.  That made Wednesday's Fed announcement important.

Even though markets saw essentially no chance of a rate hike, investors were nonetheless looking for clues to validate fears about an increasingly hawkish Fed ("hawkish": more concerned with inflation, and thus more willing to hike rates).

Although the Fed made quite a few small changes to the policy statement, they left the forward guidance paragraphs (that's where the scariest stuff would be addressed) completely untouched.

With that, rates managed to stay inside the lines, both literally and figuratively.  You can see the literal lines in the following chart of 10yr Treasury yields.  The upper and lower (diagonal) lines mark the "consolidation pattern."  2.44% is included because that's been the midpoint of the consolidation.  Spending the entire week above that midpoint means we're still very much 'in the woods.' 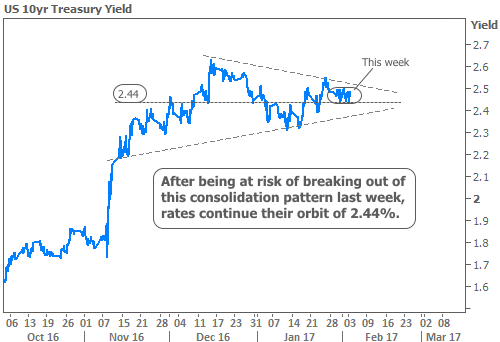 In addition to the Fed, there were several important economic reports this week.  Chief among those was Friday's nonfarm payrolls data (the big "jobs report").  Although payroll growth outpaced expectations, wage growth not only fell short, but was also revised lower for the previous month.  Wage metrics are closely-watched by both markets and the Fed right now, with the expectation being that rising wages will stoke inflation and thus, faster rate hikes.  The weak wage data helped rates hold their ground.

In addition to the wage growth explanation, one could also argue that job creation results just haven't been that surprising for several years now.  We're in the midst of a classic expansion cycle (at least in terms of payroll growth).  The following chart of Private Payrolls (a less volatile version of Nonfarm Payrolls) shows how these expansion cycles settle into ranges.  Once we begin breaking out of that range, that'll be big news. 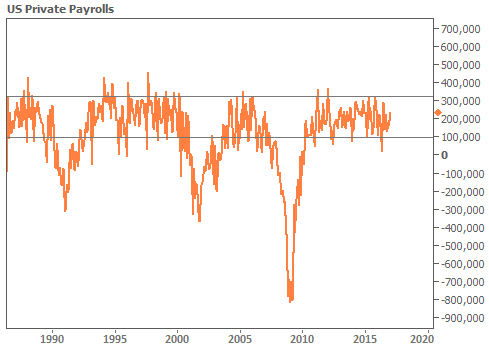 In housing-specific data, Pending Home Sales improved by 1.6 percent in December, ending the year in fine shape despite remaining in a short term trend lower.  If we throw out the arguable exuberance of the last housing boom, Pending Sales are actually leveling-off near historically healthy levels (the spikes on the chart in 2009/10 correspond with the homebuyer tax credits). 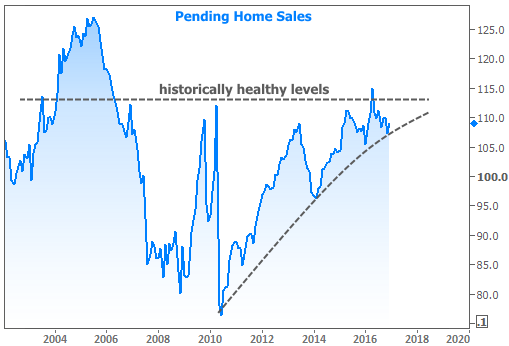